I shall now debunk the "Great Vacation" in one sentence. 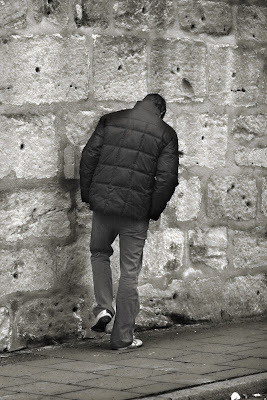 
The “Great Vacation” narrative holds that unemployment insurance (UI) benefits...have dissuaded millions of unemployed workers from taking a job.  If...jobless workers would get off their duff (or if we would give them a good swift kick there), unemployment would plummet.

Some "neoclassical" economists (e.g. Casey Mulligan) have adopted the "Great Vacation" as their favored explanation for the recession we are in. The story has also made its way into the political discourse, where it is now a regular Republican talking point.

I shall now debunk the "Great Vacation" in a single sentence:

If the labor demand curve slopes down, then a fall in labor supply should be accompanied by an increase in wages; since wages fell or stagnated in the Great Recession and have grown only slowly ever since, unemployment is not being caused by a decrease in labor supply.

Really, this is incredibly simple. Our intuition says that when a commodity becomes more scarce, the price goes up. Duh, right? Labor is a commodity. If people suddenly decide to take a vacation - whether because of a spike in laziness or an increase in unemployment insurance - employers will raise wages in order to keep some (though not all) of those workers at their desks.

This is just a way of saying that the demand curve for labor slopes down. If the demand curve slopes up, then a negative shock to labor supply (a Great Vacation) will make wages fall (as we observe in reality). That would make labor a Giffen good. It would mean that a rise in wages makes companies want to hire more workers. It would mean, among other things, that union power, by increasing wages, also increases employment. If Casey Mulligan and other Great Vacation proponents want to argue that labor demand curves slope up, well, be my guest, but the burden of proof is on them, and I doubt they will like the implications of the result.

Look, if price goes down and quantity goes down, chances are that there has been a leftward shift in the demand curve, not the supply curve. That is Econ 101 common sense. It's also a specific instance of a general principle of science: when an external influence acts on a stable system, the system will react so as to partially counteract the external influence. In physics this manifests as Lenz's Law, in psychology as opponent-process theory. If you want to see what kind of shock happened to a system, look at how the system reacted.

We are not on a Great Vacation.
Author: Noah Smith Posted at 3:11 PM