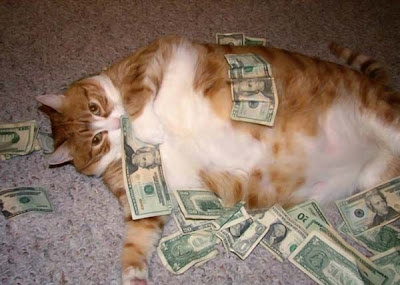 Reading this article on PIMCO, I was struck by the following line:


Industry analysts also wonder whether PIMCO's $250 billion Total Return Fund, the world's largest bond fund, is such a behemoth that Gross sometimes has to swing for the fences to generate the kind of returns investors have come to expect.

Think about this for a minute. It may seem very natural to you that people who pay large fees to a company to manage their wealth should expect that company to earn them a higher return than they would earn if they just stuck their money in a low-fee index fund.

But does this expectation make sense in the long run? Suppose you gave $1M of your money to a hedge fund with an awesome brilliant manager who was incredibly talented at picking bonds that were going to go up in price. Soon your money doubles to $2M, then to $4M, even as the average bond price goes up only a little bit. You keep your money invested with the same manager (paying the same high fee), assuming that he will continue to double your money in the same amount of time, again and again. But as the manager accumulates a bigger and bigger share of the total bond market, it becomes harder for him to beat the market average.

To see this, just imagine if your hedge fund manager did so well that pretty soon he was managing the wealth of every bond investor. In that case, it will be impossible for him to beat the market, because he is the market, literally. So it makes no sense to expect the same excess return (i.e. the same percentage points of market-beating performance) year after year.

Note that this is not Efficient Markets theory. This is just arithmetic. But the more "efficient" markets are, the quicker it will become impossible to beat the average as you grow in size, because the available mispricings that you can exploit to get excess returns will be more limited.

So here's the lesson: if investors "expect" an asset management company to beat a comparable index fund by the same number of percentage points year in and year out, they will be disappointed, because the company will soon get so big that it is almost indistinguishable from an index fund (except that it will have higher fees). Such fixed expectations of excess returns are not rational. But if investors do have such expectations, asset managers will have an incentive to accept greater and greater risk in order to have a chance of holding onto their clients. This is exactly what that article says is happening with PIMCO.
Author: Noah Smith Posted at 11:56 AM