Lower wages can be a good thing 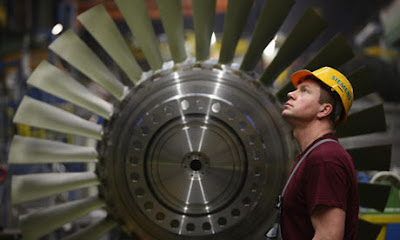 Menzie Chinn points out that recovery in manufacturing and exports has been stronger than recovery as a whole. As an explanation, he cites America's falling unit labor costs. Unit labor cost is just the amount of wages you need to pay workers to produce one unit of output. Because America's unit labor costs are falling, it is becoming more economical for businesses to produce more tradable goods here, and so they are doing so.

This is a useful reminder of a economic principle often overlooked by progressives: There is sometimes a tradeoff between wages and employment levels (which is another way of saying that labor supply curves slope up and labor demand curves slope down). If economic "frictions" or the actions of policymakers hold wages up when economic forces are trying to push wages down, unemployment will often result.
In the case of trade, what this means is that keeping American wages high can cause unemployment to rise. Starting around 2000, a huge massive glut of Chinese labor was dumped on the world market when China joined the global trade system; this created a tremendous natural downward pressure on American wages. Wages in America have stagnated since 2000, but it's difficult for wages to actually fall. This wage rigidity probably shrunk the size of America's tradable sector.
But eventually, increases in American productivity have caught up and overtaken stagnant American wages. Here is Chinn's graph:

If you believe Chinn's story, the slow growth of U.S. wages is behind the mini-resurgence in American manufacturing and exports. This is the reality of "competitiveness."
Is this a good thing or a bad thing? Well, if what you care about is higher wages for the people who have jobs, then no. But if what you care about is increasing the total number of people with jobs, then yes. If you believe that our social safety net is good enough to provide for the unemployed by taxing the employed (ha), and that the efficiency losses from artificially high wages are small, then maybe you don't care.
Another example of a tradeoff between wages and employment is in sticky-wage models of the business cycle. In these models - which include many New Keynesian models - wage frictions can increase unemployment by preventing nominal wages from falling in response to a negative demand shock. (Of course, in these models, the optimal solution is for government to use policy to cancel out the demand shock, thus preventing wages from falling while preserving employment levels.)
Lots of people don't like the idea that there is a tradeoff between wages and employment levels. They point to the long run, in which (hopefully) wages rise without causing long-term unemployment. But the short-term is different than the long term. In the case of sticky-wage models, the "short term" may only be a few years. But in the case of trade, China, and "factor price equalization," the "short term" may last until China's wages catch up to ours. That could take decades.
I believe that the mindset of some progressives - maximize wages at all costs - needs a rethink. When I look at the evidence, I see that higher wages do only a little to increase the happiness of workers, but unemployment is devastating for the unlucky few (and terrifying even for those who manage to keep their jobs). In Germany, labor unions often negotiate wage cuts in order to preserve long-term employment levels. I think we should look at doing something similar. After all, Germany is no blue-collar dystopia.
It seems weird, but lower wages can be a good thing.

Update: Note that if exchange rates were flexible, "competitiveness" would take care of itself through. The fact that unit labor costs matter for trade balances means that exchange rates must be sticky. For those of you who read Japanese, Himaginary analyzes this in the context of the Japanese economy.
Author: Noah Smith Posted at 3:51 PM