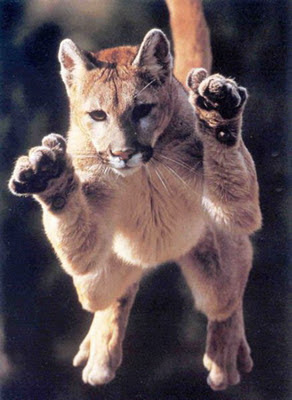 
The “big loser” here?: Old Keynesianism.  You really can get a recovery when the real shocks are moderately positive.  You will note, as we have been told many many times by many many sources, fiscal and monetary policy have not been extremely pro-active in recent times; in fact the stimulus has been trickling to a close.  The big winners, apart from the American public?: real business cycle theory.  It is part of any cyclical explanation, whether one likes it or not.

Another big loser is those liquidity trap theories which tell us that positive real shocks are bad for the economy because the AD curve has a perverse slope, etc., and that negative shocks might help spur recovery.  That theory is looking very weak, again.  I consider it the weakest economic theory that has any currency in the serious economics blogosphere.

In response, Ryan Avent tweeted: "What on earth is Tyler Cowen talking about?" I have to say, I share Ryan's sentiment. Here are the issues I have with Cowen's interpretation of the data:
1. This is one month of data. I think it may be time to add another principle to my list of Principles for Arguing With Economists: "One-Tick Economics" does not work. Time series are stochastic; one month of data, no matter how good or bad, is not enough to refute or support any macoreconomic theory. For reference, courtesy of Brad DeLong, here is a graph of the labor force/population ratio, with the most recent good news highlighted at the end: 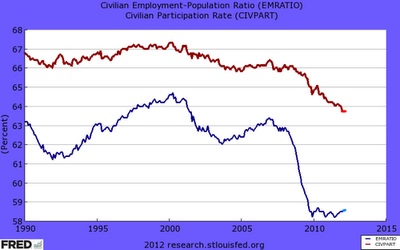 Look carefully at that graph. Do you think that tick is enough to disprove Old Keynesianism and the liquidity trap, and provide strong support for Real Business Cycle theory? Tyler says yes. I say: Highly unlikely. To evaluate their models, macroeconomists look at time series containing hundreds upon hundreds of such data points, and it's still incredibly difficult to evaluate competing macroeconomic theories. One more month is not going to come along and settle the argument. Sorry. It just isn't.

And did Cowen seize on every month of terrible employment growth over the past three years to say "Wow, Real Business Cycle is the big loser from this data, and the big winner is Old Keynesianism!"? No, he did not.
2. Growth rates and levels are different things. Even if last month's good numbers signal that the economy is recovering, it is still in a deep hole. It has not recovered yet. To support this contention, let me cite a post from Tyler Cowen from two days ago:

[W]hat is striking about the broken line above isn’t where it now ends — at 10.3 per cent — but rather the lack of any meaningful, sustained improvement for more than two years.

This alternative measure [of unemployment] has remained above 10 per cent since September 2009, and aside from a bit of skittishness (some of which is down to uncaptured seasonality) has mostly just moved sideways. 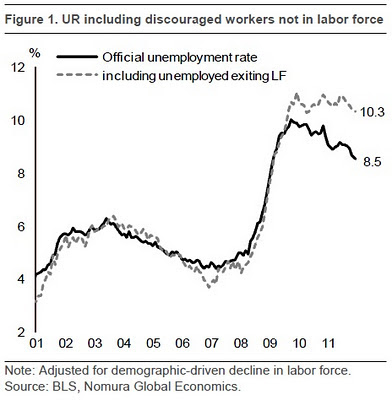 So, over two years of complete employment stagnation do nothing to strengthen the case for liquidity traps in Cowen's mind, but one month of good employment numbers relegate Old Keynesianism to the dustbin of history. Right. Got it.
3. The "liquidity trap" is not as bad as it was before. Tyler apparently believes that liquidity trap theories dictate that an economy in a liquidity trap must experience poor employment growth each and every month of the year, unless and until the government launches a sufficiently large intervention. That is a massive, ridiculous straw-man. Liquidity traps are not held to last forever. In fact, here is evidence from Greg Mankiw that the U.S. may be out (or almost out) of a liquidity trap.
4. Where's the "real shock"? Tyler Cowen says that the latest data show that "You really can get a recovery when the real shocks are moderately positive." Does he have any data to show that we have experienced a "moderately positive real shock"? What kind of shock is he talking about? A positive technology shock? An uptick in people's willingness to work? I want to see this shock identified! (And make sure it's a structural shock..."higher manufacturing orders" does not count.)
More broadly, Cowen says: "The big winners, apart from the American public?: real business cycle theory." So, presumably, the three straight years of poor economic performance were caused by negative real shocks? By poor technological progress and/or people deciding they'd rather not work? Is Cowen really willing to make that argument?
To conclude: I am not saying that Old Keynesianism is right. I am not saying that liquidity-trap theory is right. What I am saying is that one month of data does not prove these theories wrong at all, especially when employment is still far below previous levels, and especially when there is evidence that the "liquidity trap" is not as severe as it once was. And what I am saying is that this one month of data does not in any way represent a vindication for Real business Cycle Theory, especially if I can't see the "real shock."
Look, if you sit through three years of economic stagnation, watching and waiting for any single month of good employment data, and then as soon as one comes along you jump out and pounce and yell "See? Keynesianism is wrong, Real Business Cycle Theory wins!!!", well, eventually you're going to get your chance. But your conclusion, from a scientific standpoint, will be incredibly premature.
Show me half a year of solid growth under a regime of relative austerity and hard money, and I promise you I will seriously re-evaluate any and all of my own ideas about the relative importance of "real" and "nominal" shocks. We aren't there yet.


Update 2: Tyler Cowen has a lengthy response. His points:

* He says that Old Keynesiansm predicts less mean-reversion in growth than does New Keynesianism (not sure that is right, see DeLong post above).

* The "recovery" is coming right after the end of fiscal stimulus (not a strong argument; including state govt. spending there was no stimulus)

* The Old Keynesian "paradox of thrift" seems to be more applicable in the middle of a crisis than during a slow recovery (um...that sounds to me like a vote of confidence for Old Keynesianism...)

* Corporate profits are strong (This actually is much worse news for New Keyensianism than Old!)

* "Real business cycle" models actually include most economic models and phenomena (Except, of course, all models that are used by central banks and professional macro forecasters!)