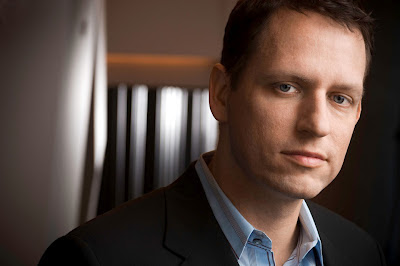 Peter Thiel is a little bit of a nutcase. He's a brilliant nutcase, though. And brilliant nutcases are exactly the kind of people who change the political discourse. Reading this Peter Thiel interview, I am more and more convinced that Thiel is the brilliant nutcase we need to move the American conservative movement out of its current rut and turn it into something that has relevance for the future.

Here are some things I learned from the interview.

In the history of the modern world, inequality has only been ended through communist revolution, war or deflationary economic collapse.

If you endogenize the possibility of social collapse, equality of income and wealth becomes a public good (up to a point).

2. Peter Thiel seems to think that we should think about how to make government more efficient, instead of drowning it in a bathtub:


There are ways that the government is working far less well than it used to. Just outside my office is the Golden Gate Bridge. It was built under FDR’s Administration in the 1930s in about three and a half years. They’re currently building an access highway on one of the tunnels that feeds into the bridge, and it will take at least six years to complete...

There’s an overall sense that in many different domains the government is working incredibly inefficiently and poorly.

3. Peter Thiel thinks that the package of conservative ideas that emerged in the Reagan years, and which dominates conservative thinking even to this day, has outlived its usefulness and must be replaced:

[T]hough I identify with the libertarian Right, I do think it is incumbent on us to rethink the history of the past forty years. In particular, the Reagan history of the 1980s needs to be rethought thoroughly. One perspective is that the libertarian, small-government view is not a timeless truth but was a contingent response to the increasing failure of government, which was manifesting itself in the late 1960s and early 1970s. The response was that resources should be kept in the private sector. Then economic theories, like Laffer’s supply-side economics, provided political support for that response, even if they weren’t entirely accurate. We can say that the economic theories didn’t work as advertised... (emphasis mine)

I have been saying this for a long time. The idea that "government is the problem" may have had considerable truth and usefulness and relevance in 1980; today, it is more of a calming mantra than a feasible policy prescription. Conservatism needs something else.
4. Peter Thiel believes in a version of Tyler Cowen's "Great Stagnation" idea, but is more subtle than Cowen, because he doesn't try to argue that the IT revolution was a mirage; he simply believes that it wasn't enough to compensate for the slowdown in other areas:

I believe that the late 1960s was...when scientific and technological progress began to advance much more slowly. Of course, the computer age, with the internet and web 2.0 developments of the past 15 years, is an exception...

There has been a tremendous slowdown everywhere else, however. Look at transportation, for example: Literally, we haven’t been moving any faster. The energy shock has broadened to a commodity crisis...I think the advanced economies of the world fundamentally grow through technological progress, and as their rate of progress slows, they will have less growth. This creates incredible pressures on our political systems. I think the political system at its core works when it crafts compromises in which most people benefit most of the time. When there’s no growth, politics becomes a zero-sum game in which there’s a loser for every winner. Most of the losers will come to suspect that the winners are involved in some kind of racket. So I think there’s a close link between technological deceleration and increasing cynicism and pessimism about politics and economics.

I couldn't agree more. Energy is where the slowdown is, and that affects everything else (though IT is affected less). And yes, a technological slowdown will make politics more of a zero-sum game, with all kinds of awful consequences (example: all of human history before the mid-1700s).
(Interestingly, the interview reveals that Cowen's book was heavily inspired by Thiel's ideas. See? Brilliant nutcases moving the political discourse!)
5. Peter Thiel believes that much of our inequality is due to factor price equalization, caused by the massive dump of Chinese labor onto global markets:

As for why inequality has gone up...I would say globalization has played a much greater role [than other factors] because it has been the much greater trend...The question is, what is there about globalization that creates a winner-take-all world? There certainly has been a labor arbitrage with China that has been bad for the middle class, as well as for white-collar workers, in the past decade or two.

I agree with this, though I think that our wage stagnation itself may also be worsened by the labor arbitrage,   as we replace expensive automation with cheap Chinese workers. Thiel hints at this idea in his interview, but doesn't go there.
6. Peter Thiel thinks that the government should be more hands-on about industrial and technology policy, not less:

[T]he unplanned statistical view of the future is that we don’t know what energy technology will work, so we’ll experiment with different things and see what takes off. The planned view says that two are most likely to be dominant, and so the government has a role to play in coordinating resources and making sure they work. So if it’s nuclear power, it has to free up space at Yucca Mountain, deal with zoning rules and get plants built, and it’s a complicated project at the regulatory level. The same is true of solar or wind power. If government wants high-speed rail, it must overcome local zoning rules...

[N]o one at a senior level in the Administration even thinks about the question of technology. It’s assumed to be a statistical, probabilistic thing...This is a radically different position than, say, that of John F. Kennedy, who could talk about the nuts and bolts of the Apollo space program and all the details of what was needed to make it happen...

If there is going to be a government role in getting innovation started, people have to believe philosophically that it’s possible to plan. That’s not the world we’re living in. A letter from Einstein to the White House would get lost in the mail room today. (emphasis mine)

It strikes me that there is a huge opening for conservatives here. Ever since the success of the Clinton years, many liberals have come out against industrial policy (possibly to burnish their "seriousness" credentials in a policy world dominated by neoclassical economics). This gives conservatives an opportunity to be the ones to champion a new era of technology policy: to say "Look, the government's role should not be to throw more money at health care, it should be to do the kind of planning and coordination of technological progress that companies are unable or unwilling to do." This will require conservatives to throw off a lot of the "libertarian" dogma that became canon after the Reagan years. But far-sighted libertarians like Alex Tabarrok are already making this argument, so I see a lot of reason for hope.
Anyway, I agree with and endorse all six of the Peter Thiel positions listed above. That's right - I am saying "ditto" to the man who created the Stanford Review. Well, not "ditto," since Thiel also has a number of opinions with which I strongly disagree (and others about which I'm highly skeptical). An example would be his idea that environmental regulation has played a large role in the technological slowdown. (And yes, we shouldn't forget that Thiel thinks women's sufferage was a disaster, and wants to live on a floating libertarian utopia out of trash...Like I said, he's a brilliant nutcase.)
But the basic thrust of Thiel's worldview is sound: We need a conservative movement that is focused on progress. Reagan and Clinton may have succeeded in burning some institutional deadwood, but by the time the Bush years rolled around, we were down to burning the furniture. Proceeding further down the path of deregulation, spending cuts, and intentional government shutdowns is unlikely to do anything except to convert us to a neo-feudal backwater. Additionally, telling people to shut up about inequality is not likely to be effective in the long term.
The United States cannot succeed if public policy goes off the rails every time Republicans win an election. I am a liberal, but I believe we desperately need a relevant, functioning conservative movement. We need a conservative movement that is focused on making the government more effective, not smaller. Arguing for cutting the heath-care welfare state are sound; crusades against trains are ridiculous. The conservatism of the future - if conservatism is to have a productive future - is one that acknowledges the existence of public goods, and tries to steer government away from redistribution and waste and toward provision of those public goods. Progress must be the name of the game.
I hereby nominate Peter Thiel as the official thought leader of the new conservatism.
Author: Noah Smith Posted at 11:19 AM