Is solar a bigger deal than people realize? 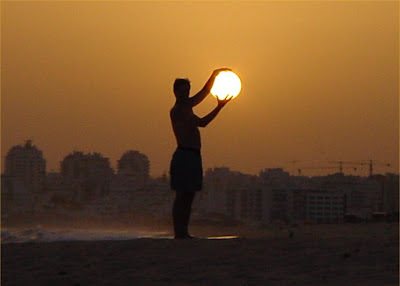 In November, Tyler Cowen had this gloomy prediction about solar power:


If a solar breakthrough is now likely, in which market prices do we see it reflected?  It is true that fossil fuel prices took a steep tumble in the last few months, but I’ve never heard anyone suggest that price plunge had to do with a forthcoming solar revolution...For better or worse, those shale oil and natural gas discoveries — which by the way will create lots of jobs — will further raise the bar against solar power, and it’s not just the Republicans who will promote them...Is there any reason, based in industry-wide market prices, to be optimistic about the near-term or even medium-term future of solar power?  I don’t see it.

However, the numbers are in, and solar power installation only continues to grow:

Last year seemed like a dark one for the solar industry: stiff competition from China drove American manufacturers to layoffs and even bankruptcy, while the low price of natural gas and the loss of a critical government subsidy weakened incentives for new solar developments. And then there was the long shadow of Solyndra, whose bankruptcy after receiving federal loans cast a pall over other green-energy endeavors.

And yet, by the numbers, 2011 was a banner year for all those sparkling blue modules, according to a report published on Wednesday by the Solar Energy Industries Association and GTM Research. About 1,855 megawatts of new photovoltaic capacity was installed, more than double the 887 megawatts of the year before. The number of large-scale installations grew as well, to 28 from just 2 in 2009.

Globally, the United States represents only 7 percent of all photovoltaic capacity, the report found, but that’s up from 5 percent in 2010...

System prices fell 20 percent because of cheaper components (the average price of a panel dropped 50 percent), more options for financing, better installation methods and the shift to larger arrays. In addition, with the expiration of the Treasury Department’s 1603 tax grant program, many developers rushed to get their projects going before the end of the year.

Elsehwere, the Wall Street Journal reports that more than 15% of new U.S. power generation capacity in 2012 is expected to come from renewables other than wind and hydropower - in other words, solar (weird that they don't identify solar by name, eh?). This is twice as much as coal, and more than three times as much as nuclear - and keep in mind, these are percentages of total new U.S. electricity generation, not percentage growth rates. Solar is booming!

Two caveats here. The first - as solar energy's detractors are quick to point out - is that the industry survives on government subsidies. That is true. Keep in mid, though, that the cost gap with fossil fuels - which needs to go well below zero in order for solar to take over - is less than it appears, since fossil fuel energy receives government subsidies as well.

But the U.S. industry's troubles were a function not of stagnating solar technology, but of plummeting prices for their final products, brought about in large part by Chinese competition. Basically, China threw its industrial might (and government subsidies) into building up its solar industry, causing a global glut that made it hard for U.S. manufacturers to compete. But while that is bad news for U.S. companies, it's good news for solar energy technology, since it will lead to large permanent cost reductions in solar manufacturing.

Remember, the disappearance of the U.S. textile industry doesn't mean you're in danger of going without pants. Quite the opposite, in fact.

Basically, there is lots of good news for solar as a technology. Solar costs have been falling exponentially, and with new cost-reducing technologies on the horizon there is no reason to believe that this process is flattening out. And keep in mind, the deck is stacked against fossil fuel energy; technological improvements that reduce fossil fuel costs (e.g. fracking or horizontal drilling) are fighting against a mighty tide, because extraction costs tend to rise as easily accessible deposits are exhausted. Cost reductions in solar, on the other hand, are essentially permanent.

Proponents of a "Great Stagnation" hypothesis should take another look at solar. The area in which human progress has most stagnated over the past half century has been energy; nuclear power has been a bust, and fossil fuels have gotten more expensive. Barring a miracle technology like nuclear fusion, solar is our best long-term hope to reverse that stagnation. For now, fortunately, solar is booming. Let's hope it continues.

Update: As I now recall, Paul Krugman was very optimistic about solar back in November. The new numbers appear to bear his predictions out. Score another one for the Krug-man, I suppose. Is it just me, or does the issue of energy technology seem bizarrely politicized? Optimism and pessimism about solar seem to break down almost exclusively along ideological lines (here's National Review trashing Krugman's optimism; here's Cato blogger Arnold Kling being pessimistic). Is there a reason that conservatives should want to be pessimistic about new energy technology? I mean, besides the fact that many conservative outlets are funded by a certain pair of fossil fuel barons. That can't be all of it, can it? If I were a conservative, I'd take a second look at solar and ask myself very carefully if its success would be a good thing for them or a bad thing. I think on balance it would be a good thing.
Author: Noah Smith Posted at 10:04 PM