What do inflation hawks know that we don't? 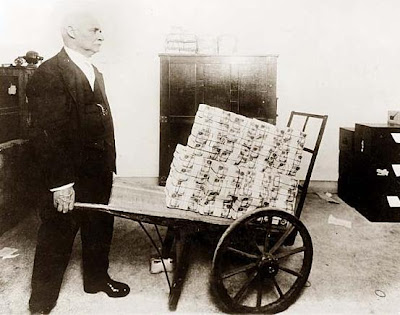 (First, a disclaimer: I am not using the word "inflation hawk" in a pejorative way; I am using it to mean "Someone whose inflation expectations are higher than the consensus forecast.")


Bottom line: I think some serious inflation is coming, maybe sooner than later. The Fed thinks it can control this with reverse repos and term deposits at the Fed. No way. When will the inflation happen? In line with this post, look out for increases in house prices. The higher house prices will support more credit, both at the consumer level, and in higher-level financial arrangements. The "bubble" will grow, and support the creation of more private liquid assets, which will in turn substitute for publicly-issued liquid assets, causing the price level to rise.

If Steve is right, then he can make a lot of money by buying assets that are good inflation hedges. Why? Because currently, financial markets do not share Steve's expectations of "serious inflation sooner than later." As Steve points out, the 10-year TIPS spread is now about 2.5%, meaning that financial markets expect inflation to be about 2.5% - above the Fed's 2% target, but not very serious by historical standards. (Update: Ryan Avent notes that the Cleveland Fed's alternate measure of inflation expectations indicates that people believe inflation will be even lower than that!) If Steve is right and the market is wrong, he can beat the market. If he's confident enough in his forecast, this is exactly what he should do.

Then again, Steve Williamson is a monetary economist, so maybe he is smarter than the market (Update: Steve drops by in the comments to explain that he does in fact think that this is the case. So the rest of this post is a little beside the point, but still possibly worth reading)! Why does he think serious inflation is coming soon? Well, maybe he has some reasons he doesn't say, but in his post, he cites two things. The first is Jim Bullard's theory of why there is currently no output gap. Steve says he likes this theory. The second thing he cites is the amount of money that has been created in recent years - which, according to the idea that inflation is a monetary phenomenon, should eventually cause higher inflation.

But is it worth making an above-market inflation prediction on the basis of these things alone? After all, Bullard's speech is public knowledge. Even without the Bullard theory, the notion that there is no output gap is not exactly restricted to ivory-tower academics (see Felix Salmon and Greg Ip). Nor is the idea that creating money causes inflation. Presumably, these ideas are not new or secret.

So maybe Steve thinks there is some reason why the public isn't buying into these correct theories? Perhaps he thinks that wrong theories of inflation forecasting (e.g. Phillips Curve forecasting) have gained widespread support? Maybe so, but Steve's colleague David Levine might take issue with such a blithe rejection of Rational Expectations.

Or maybe Steve knows something else, something that the rest of us don't know, and is even now buying inflation hedges based on that knowledge? If so, he'd be wise to keep his reasoning secret from the hungry eyes of the market.

Or maybe I've just read Steve's language wrong. Maybe he thinks 2.5% inflation is "significant". It is certainly above the Fed's official target by half a percentage point. (Note: In the comments, Andy Harless points out that the Fed targets a measure of inflation that is slightly different from what TIPS are pegged to.)

In any case, I'm not disagreeing with Steve's prediction, nor agreeing with it. I'm not a monetary economist, and I really am quite ignorant about the theory involved. I just think it's interesting to try to understand the thinking of inflation hawks (again, no insult intended).

Update: Well, it appears my question has been answered. Steve Williamson, from the comments:


Knowledge of money and banking theory is scarce. In many Economics PhD programs...they don't teach much of it, if any. Knowledge of the theory is even more scarce on Wall Street. I spent a good part of last week in New York City...and I overheard plenty of street conversation among people who were apparently market participants, and who were also shockingly naive. The monetary regime we are in is very different from what it was pre-crisis, in ways that I don't think the market, or the Fed, for that matter, completely understands. I have been thinking about money and banking theory for a long time. I could be wrong, but I think I know something that other people don't.

It's theory. Some combination of the theories he cites in the post, and various others that he knows - most of which he thinks Wall Street people either don't know or refuse to believe - make him think the market is wrong and inflation is on its way...
Author: Noah Smith Posted at 5:16 PM