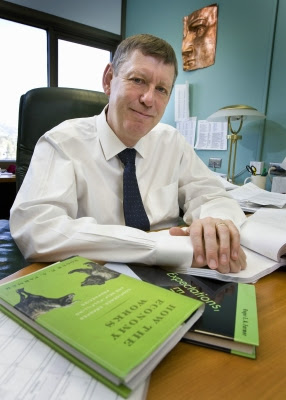 Roger Farmer had some very interesting things to say regarding my last post on equilibrium analysis, but unfortunately Blogger somehow imposes a maximum comment length! And really, it's too interesting to languish down in the comments section, so now it's a guest post! Without further ado:


As a proponent of models with multiple equilibria, let me say a few words about your very interesting post on disequilibrium. I am a big fan of Bob Lucas' insistence on restricting ourselves to equilibrium models. Why?

The idea of disequilibrium is borrowed from the physical sciences where it has meaning in the context of, for example, Newtonian mechanics. A ball rolling down an inclined plane is an example of a physical system in disequilibrium. When it reaches the bottom of the plane, friction ensures that the ball will come to rest. That is an equilibrium. But it is not what we mean by an equilibrium in economics.

An economic equilibrium, in the sense of Nash, is a situation where a group of decision makers takes a sequence of actions that is best, (in a well defined sense), on the assumption that every other decision maker in the group is acting in a similar fashion. In the context of a competitive economy with a large number of players, Nash equilibrium collapses to the notion of perfect competition.  The genius of the rational expectations revolution, largely engineered by Bob Lucas, was to apply that concept to macroeconomics by successfully persuading the profession to base our economic models on Chapter 7 of Debreu's Theory of Value, as opposed to the hybrid models of Samuelson's neoclassical synthesis. In Debreu's vision, a commodity is indexed by geographical location, by date and by the state of nature.  Once one applies Debreu's vision of general equilibrium theory to macroeconomics, disequilibrium becomes a misleading and irrelevant distraction.

The use of equilibrium theory in economics has received a bad name for two reasons.

First, many equilibrium environments are ones where the two welfare theorems of competitive equilibrium theory are true, or at least approximately true. That makes it difficult to think of them as realistic models of a depression, or of a financial collapse, since the welfare of agents in a model of this kind will be close to the best that can be achieved by a social planner. An outcome that is best, in this sense, does not seem, to me, to be a good description of the Great Depression or of the aftermath of the 2008 financial crisis.

Second, those macroeconomic models that have been studied most intensively, classical and new-Keynesian models, are ones where there is a unique equilibrium. Equilibrium, in this sense, is a mapping from a narrowly defined set of fundamentals to an outcome, where  an outcome is an observed temporal sequence of unemployment rates, prices, interest rates etc. Models with a unique equilibrium do not leave room for non-fundamental variables to influence outcomes. It is not possible, for example,  for movements in markets to be driven by sentiment; what George Soros has called "the mood of the market". It is for that reason that conventional theory seeks to explain large asset price swings as disequilibrium phenomena.

Multiple equilibrium models do not share these shortcomings (see, for example, this) And they do not need to appeal to disequilibrium explanations to account for phenomena that are anomalous when one adopts the unique-equilibrium perspective. But although multiple equilibrium models have advantages in these respects, they lead to a new set of questions. It is easy enough to write down an economic model where more than one outcome is possible. But how would a rational economic agent behave if placed into an environment that was the real world analog of the economist's model?

The answer, I believe, is that a model with multiple equilibria is an incomplete model. It must be closed by adding an equation that explains the behavior of an agent when placed in an indeterminate environment. In my own work I have argued that this equation is a new fundamental that I call a belief function.  It represents the end result of a process of learning; either from past observations of economic data or from copying the behavior of ones peers.

The belief function is a mapping from past observable variables to expectations of all future variables that are relevant to a decision maker. It is this function that guides behavior when a rational expectations model is indeterminate. The belief function provides a way for social psychology to influence economic outcomes, and in my view; it should be accorded the same methodological status as that of preferences, technology and endowments in a classical or new-Keynesian model.

I work with models of multiple equilibrium that have incomplete labor markets (see, for example, this); as a consequence of this incompleteness, these models have multiple steady state equilibria. Incomplete labor market models fit the data better than their classical or new-Keynesian counterparts ( see http://rogerfarmer.com/newweb/pdffiles/farmer_phelps_volume_revision.pdf ). And because they do not imply that all unemployment is socially optimal, they are able to account for the mass human misery caused by persistent unemployment that we observe in periods like the Great Depression or the 2008 financial crisis.

Like their classical or new-Keynesian counterparts, incomplete labor market models explain data as a unique mapping from fundamentals to outcomes. But fundamentals include more than just technology, preferences and endowments; they also include a role for market sentiment. Outcomes in these models can sometimes be very, very bad.

This brings me to your excellent post on the use of the disequilibrium assumption in economics. If by disequilibrium, I am permitted to mean that the economy may deviate for a long time, perhaps permanently, from a social optimum; then I have no trouble with championing the cause. But that would be an abuse of the the term 'disequilibrium'. If one takes the more normal use of disequilibrium to mean agents trading at non-Walrasian prices, as in the  models of Benassy and Dreze from the 1970s; I do not think we should revisit that agenda. Just as in classical and new-Keynesian models where there is a unique equilibrium, the concept of disequilibrium in multiple equilibrium models is an irrelevant distraction that has been imported, inappropriately, from the physical sciences where equilibrium means something very different from its modern usage in economics.

1. Roger's post addresses, in a much more precise and well-informed way, possibilities (2) and (3) from my last post. But it rejects possibility (1), which involves non-Walrasian prices.

2. I really like the idea of a "belief function". This is basically chucking Rational Expectations - not because people are irrational, but because the notion, as Lucas thought of it, of people's beliefs coinciding with the equilibrium outcome of an economic model doesn't make a lot of sense in a world of constantly shifting multiple equilibria.

3. I heavily suspect that I am one of the people importing the idea of "disequilibrium in multiple equilibrium models" from the physical sciences. I am not yet convinced that it is an inappropriate analogy, or that non-Walrasian prices are a fruitless line of inquiry, but I will have to read a lot more to understand properly...

Anyway, much thanks again to Roger for the guest post. This is not the most attention-grabbing media-friendly stuff, but it is very deep and important to the future of both how economics is done and how the discipline is perceived by outsiders.
Author: Noah Smith Posted at 10:54 AM