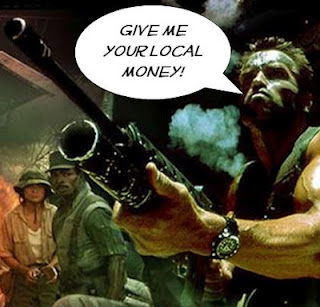 Greg Mankiw has an op-ed extolling the benefits of competition between governments (at the local, state, or national level). The basic argument is that competition reduces the ability of governments to redistribute wealth, since whoever is being taxed to pay for the redistribution can just move to somewhere with lower taxes.

Allow me to gripe for a moment. This article seems to make the same assumption that American conservatives and libertarians generally make about government: that government spending is 100% redistribution and 0% public goods provision. Pure transfers, with no contribution to economic efficiency. This assumption is built into conservative-favored macro models and conservative policy discourse alike.

We do not just have governments in order to rob Peter to pay Paul. We have governments because there are things they can provide that the private sector is either unable or unwilling to provide effectively - courts, police, schools, roads, other infrastructure, etc. Conservatives focus so much on redistribution that they tend to ignore this fact, but if you think about it, you'll realize public goods are why we have government in the first place.

But here's a question that might be of interest to Dr. Mankiw: Does government competition generally lead to bigger government or smaller government? Greg provides the example of international competition to lower corporate tax rates; I agree with this example and I think it's a good thing, but I don't think this is the norm.

Generally, local governments will compete to attract investment. They do this by lower business taxes and less regulation, sure. But they also do this by increasing spending on things like infrastructure and education, in order to provide businesses with the local resources they require. They also offer businesses direct subsidies. Somebody has to pay for those things. Guess who's going to foot the bill? That's right, local taxpayers.

(Aside: Yes, some of the money local governments spend to attract investment is wasted, especially the direct subsidies; see the Tiebout result above. A lot is not wasted, though. Roads and schools are necessary.)

So I think that, in his zeal to attack redistribution, Greg may be overlooking two things here. The first is that the federal government contributes to economic efficiency, not just redistribution. The second is that government competition for business investment will often make government bigger, not smaller. Conservatives should think about both of these points.

(Update: For you econo-nerds, note that there are two questions here: 1) the relative efficiencies of different systems of local-government competition, and 2) the distribution of rents under the various systems. These both depend on a lot of things in general, and there's a huge literature on this. I'm just sketching out a couple ways in which "more competition" might not achieve results to Mankiw's liking...)
Author: Noah Smith Posted at 1:17 PM