Neither Real, nor Business, nor Cycles 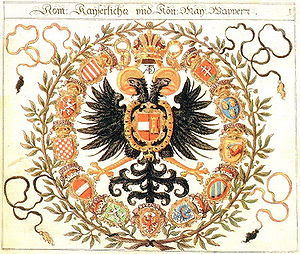 It has often been said of the Holy Roman Empire that it was "neither Holy, nor Roman, nor an Empire." However, that joke has gotten a bit stale since Voltaire wrote it in the 1700s, so I think it's time for a new one. Real Business Cycle models, it turns out, are neither Real, nor about Business, nor about Cycles.

They are, however, the macro models that annoy me far more than any other (and I'm not alone). I'll explain the joke in increasing order of the things that annoy me.

First, "Cycles". The "business cycles" in RBC models are not periodic, like cycles in physics. But they are also not "cycles" in the sense that a bust must follow a boom. Booms and busts are just random shocks. The "business cycle" that we think we see, according to these models, is simply a statistical illusion. (Actually, RBC shares this property with New Keynesian and Old Keynesian models alike. Very few people dare to write down a model in which knowing you're in a boom today allows you to predict a bust tomorrow!)

Next, "Business". Businesses are called "firms" in economic models. But if you look at the firms in an RBC model, you will see that they bear very little resemblance to real-life firms. For one thing, they make no profits; their revenues equal their costs. For another thing, they produce only one good. (Also, like firms in many economic models, they are all identical, they live forever, they make all their decisions to serve the interests of households, and they make all decisions perfectly. Etc. etc.) In other words, they display very few of the characteristics that real businesses display. This means that the "business cycle" in an RBC model is not really the result of any interesting characteristics of businesses; everything is due to the individual decisions of consumers and workers, and to the outside force of technological progress.

Finally, "Real". This is the one that really gets me. "Real" refers to the fact that the shocks in RBC models are "real" as opposed to "nominal" shocks (I've actually never liked this terminology, since it seems to subtly imply that money is neutral, which it isn't). But one would have to be a fool not to see the subtext in the use of the term - it implies that business-cycle theories based on demand shocks are not, in fact, real; that recessions and booms are obviously caused by supply shocks. If RBC is "real", then RBC's competitors - Keynesian models and the like - must be fantasy business cycle models.

However, it turns out that RBC and reality are not exactly drinking buddies. I hereby outsource the beatdown of the substance of RBC models to one of the greatest beatdown specialists in the history of economics: the formidable Larry Summers. In a 1986 essay only slightly less devastating than his legendary dismissal of the Winklevoss twins, Summers identified three main reasons why RBC models are not, in fact, real:

1. RBC models use parameter values that are almost certainly wrong,

2. RBC models make predictions about prices that are completely, utterly wrong, and

3. The "technology shocks" that RBC models assume drive the business cycle have never been found.

I encourage everyone to go read the whole thing. Pure and utter pulpification! Actually, this essay was assigned to me on the first day of my intro macro course, but at the time I wasn't able to appreciate it.

So Real Business Cycle models are neither Real, nor about Business, nor about Cycles. Are they models? Well, sadly, yes they are...of a sort. You actually can put today's data into an RBC model and get a prediction about future data. But see, here's the thing: that prediction will be entirely driven by the most ad-hoc, hard-to-swallow part of the model!

Basically, here's how an RBC model works. You take every factor of production you can measure - capital, labor, inventories, etc. - and you factor it out, and then you're left with the part of production you can't explain, which is called the "residual". You then label this residual "technology", and you assume that it moves according to some sort of simple stochastic process - for example, an AR(1). The rest of the model is just a description of the ways in which the rest of the economy responds to that AR(1) technology "process". In RBC models, this response is usually as simple and uninteresting as possible; pretty much everything is driven by the uber-simplistic movement of "technology".

In other words, if I want to make a forecast using an RBC model, that forecast will be based on the assumption about tomorrow's level of "technology" - i.e. the part of the model that doesn't come from data we can directly measure - and that level, in turn, will be "predicted" by nothing more than the simplest stochastic equation imaginable! As you might therefore expect, RBC models do not do so well at forecasting the future (though, to be fair, a few disagree with that assessment).

(Note that this makes RBC a glaring example of what I call "Label-the-Residual Economics", in which the economist assumes that the part of the world that we can't measure is the Mysterious Force that drives everything, but that we can accurately predict the future behavior of this Mysterious Force.)

Now, some work has been done on improving RBC models since their inception - instead of technology, for example, some modelers try to tie business cycles to news about technology. But most of the macro profession has moved on to other types of DSGE models, especially new Keynesian models. And yet the RBC paradigm persists, especially at certain universities. Why? In a recent blog post, Simon Wren-Lewis lays out this case that's it all about the politics:

In RBC models, all changes in unemployment are voluntary. If unemployment is rising, it is because more workers are choosing leisure rather than work. As a result, high unemployment in a recession is not a problem at all...workers choose to work less and enjoy more free time...

If anyone is reading this who is not familiar with macroeconomics, you might guess that this rather counterintuitive theory is some very marginal and long forgotten macroeconomic idea.

You would be very wrong. RBC models were dominant in the 1980s, and many macroeconomists still model business cycles this way. I have even seen textbooks where the only account of the business cycle is a basic RBC model...

One explanation [for RBC's popularity] is ideological. The commonsense view of the business cycle, and the need to in some sense smooth this cycle, is that it involves a market failure that requires the intervention of a state institution in some form. If your ideological view is to deny market failure where possible, and therefore minimise a role for the state, then it is natural enough (although hardly scientific) to ignore inconvenient facts. For the record I think those on the left are as capable of ignoring inconvenient facts: however there is not a left wing equivalent of RBC theory which plays a central role in mainstream macroeconomics.

At any rate, this bit about politics is a digression. The central point of this post is that Real Business Cycle models, whether politically motivated or not, are massively oversold as descriptions of the recessions and booms that we observe and live through. People should know that they contain neither Reality, nor Business, nor Cycles.

How long did it take the Holy Roman Empire to finally give up the ghost? Depressingly, it was more than half a century after Voltaire made his little joke...
Author: Noah Smith Posted at 11:47 AM