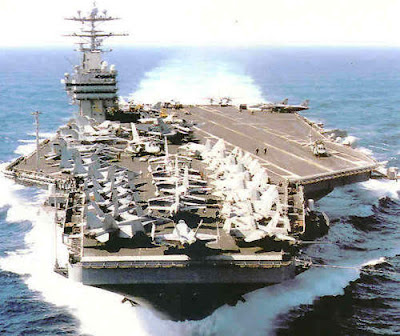 Two items of news caught my eye today. The first is that Republicans in Congress are trying to stop the U.S. military from using biofuels:


In its report on next year’s Pentagon budget, the House Armed Services Committee banned the Defense Department from making or buying an alternative fuel that costs more than a “traditional fossil fuel.”...if the measure becomes law, it would make it all-but-impossible for the Pentagon to buy the renewable fuels. It would likely scuttle one of the top priorities of Navy Secretary Ray Mabus. And it might very well suffocate the gasping biofuel industry, which was looking to the Pentagon to help it survive.

Now, this sounds like a fairly straightforward narrative: cost-conscious Republicans versus free-spending Democrats who want to push a "green" agenda and protect favored industries. But a moment's thought will reveal that it's not so simple. The "cost" of a fuel source is not entirely reflected in its spot price. Here are purely economic reasons why the military might want to buy some biofuel:

1. Research and development. If the cost of biofuel can be brought below the cost of fossil fuels, not just the U.S. military but the entire human race will massively benefit. However, energy technology must be embodied in actual economic activity - it probably takes a lot of large-scale investment and trial-and-error to advance the state of the technology. Therefore, what looks like expensive biofuel might actually be cheap to a very patient monopsonist. Already, the cost of algae-based biofuel purchased by the U.S. Navy has fallen by a factor of 16 in two years!

2. Idiosyncratic risk. The U.S. Military faces different risks than other fuel buyers. For one thing, the military's budget changes very slowly, so spikes and dips in the price of fuel can interrupt military operations. This provides an incentive for the military to diversify its fuel sources. Also, a successful operation by an enemy military power to temporaily block the international flow of fossil fuels during a war would be annoying for a business, but devastating for our military.

In fact, the Secretary of the Navy made basically these arguments:

Mabus and his allies countered that...Of course relatively small batches of a new fuel are going to be expensive — just like the original, 5GB iPod cost $400 and held fewer songs than today’s $129 model, which holds 8 GB. That’s the nature of research and development. With development time and big enough purchases, the costs of biofuels will come down; already, the price has dropped in half since 2009...

What’s more, Mabus added, there’s a value in a more stable, domestic supply of fuel; every time the price of oil goes up by a dollar per barrel, it costs the Navy $31 million. “We simply buy too much fossil fuels from places that are either actually or potentially volatile, from places that may or may not have our best interests at heart,” he said...

None of those arguments managed to sway House Republicans[.] (emphasis mine)

So do Republicans just have a weak grasp of some of the more subtle points of economics? Or do they have some vested interest in blocking the adoption of non-fossil energy sources?

The other news story that caught my eye may provide some insight into that question. It's about a new campaign by conservative think tanks to block the adoption of solar and wind power:

A number of rightwing organisations, including Americans for Prosperity, which is funded by the billionaire Koch brothers, are attacking Obama for his support for solar and wind power. The American Legislative Exchange Council (Alec), which also has financial links to the Kochs, has drafted bills to overturn state laws promoting wind energy.

It suggests setting up "dummy businesses" to buy anti-wind billboards, and creating a "counter-intelligence branch" to track the wind energy industry. It also calls for spending $750,000 to create an organisation with paid staff and tax-exempt status dedicated to building public opposition to state and federal government policies encouraging the wind energy industry...

ATI [the think tank coordinating the campaign] is part of a loose coalition of ultra-conservative thinktanks and networks united by their efforts to discredit climate science and their close connections to the oil and gas industry, including the Koch family. Those groups include the Heartland Institute, the John Locke Foundation, and Americans for Prosperity, the organising arm of the Tea Party movement.

As in the case of the military, state governments deciding which energy source to buy face a problem that is not a simple static cost minimization problem. Here are some additional considerations a local government should consider:

2. Environmental costs. I think that the environmental costs of fossil fuel use are much lower than members of the Pigou Club think. This is not because global warming isn't real (it is!), or because it isn't dangerous (it is!), but because fossil fuels are pretty fungible, meaning they can be sold on world markets; if the U.S. burns less, China will simply burn what we don't burn (this is not always true, especially in the case of coal). But there are some carbon costs all the same.

Also, there is the research aspect, again.

In addition, this campaign by conservative think-tanks seeks to raise costs for the wind industry by using local government to block wind farm construction. That has nothing to do with halting industrial policy, and everything to do with using government regulation to overrule the logic of the market.

It seems to me overwhelmingly reasonable to assume that the U.S. fossil fuel industry, led by oil barons like the Koch brothers, would try to push for government policies that favor their industry at the expense of potential future competitors, irrespective of actual market logic. It also seems obvious to me that the U.S. fossil fuel industry is a key backer of the Republican party and a key backer of conservative think tanks and opinion-making organizations. Are these two facts sufficient to prove that the conservative campaign against alternative energy runs counter to economic efficiency? No. It may still be true that government adoption of non-fossil energy sources is a misguided, ideological initiative. But as non-fossil energy costs fall and fall, that position will become harder and harder to defend.

Update: Fred Kaplan backs me up in this excellent article at Slate.
Author: Noah Smith Posted at 4:35 PM