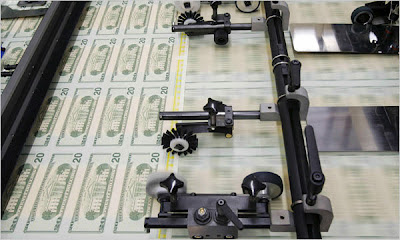 OK, OK, one more quick post and then back to work!!

2. The Modigliani-Miller theorem says that changes in the Fed's portfolio of assets (and, hence, QE) must have no effect.

3. Actually I can't understand the third argument at all. This doesn't necessarily mean that Steve's writing is akin to that of William Faulkner on bath salts; instead, it probably reflects my poor reading comprehension.

I actually am not quite sure what to think about the first argument, so I won't address it here. And I don't get what the third argument even is (sorry!). So I'll discuss the second argument: the idea that QE is rendered powerless by the Modigliani-Miller Theorem. Steve writes:


Another useful piece of finance is the Modigliani Miller theorem. Kimball might want to explain to us why, if the Fed issues reserves (overnight liabilities), and buys some other assets, and private financial intermediaries are perfectly capable of issuing overnight liabilities and buying the same assets, that the Fed's QE is not undone.

The archetypical result of this type is Wallace (1981), which you can read here. Under certain highly restrictive and odd-sounding conditions, the government's asset portfolio does not affect the economy at all. One of these conditions, for example, is that the government uses lump-sum taxes to cancel out any net interest payments that it pays to, or receives from, the private sector. If that sounds weird, it's because nothing like that ever happens in the real world. Wallace, of course, freely admits this, and says his model is only intended as a benchmark.

But what if Wallace's model were really in effect? First, realize that it wouldn't just make QE ineffective, it would make Open Market Operations (i.e. the normal thing the Fed does to change interest rates when interest rates are not zero) ineffective as well. For this reason, Jim Bullard of the St. Louis Fed dismisses the Modigliani-Miller type argument. Most people think Open Market Operations really can affect GDP, such as when Paul Volcker reduced the monetary base in the early 80s.

But here's an even more important fact about the Wallace (1981) result: If this result holds, then printing money not only can't effect GDP, it can't affect inflation either. Yep. You read that right. The Modigliani-Miller type result implies that you can print as much money as you want, and prices will stay exactly the same. To quote Wallace:


Irrelevance here means that both the equilibrium consumption allocation and the path of the price level are independent of the path of the government's portfolio. (emphasis mine)

There are some other models similar to Wallace's that yield Modigliani-Miller type results, but they all have this same property.

I doubt that Steve Williamson believes that printing money can't cause inflation. In particular, this post of his from March warns that the excess reserves created by the Fed will create inflation. But if Steve is right about that, then there is no Modigliani-Miller result for QE, and this criticism of Miles Kimball's model is invalid.

Anyway, Steve should take up this argument with St. Louis Fed president Jim Bullard, who has argued forcefully that QE2, the last round of quantitative easing, had some of the effects that it couldn't have in a Wallace (1981) type model. Steve is a big Bullard fan, and will doubtlessly respect his thoughts more than that of a humble graduate student like yours truly...

Update: Miles Kimball responds. The upshot: It might take trillions and trillions of dollars of Fed asset purchases to have an effect on the real economy.

Update 2: Steve Williamson responds, explaining his reasons for believing in a Modigliani-Miller type irrelevance result for QE. He also adds a couple of criticisms of Miles' arguments at the end, but I don't understand these last points, so I can't really comment.
Author: Noah Smith Posted at 10:44 PM