I found a Bizarro Economics World! 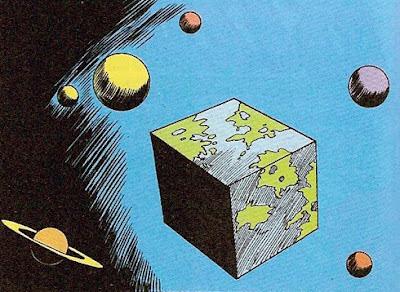 I will now give you an insight into the BEW. Steve Randy Waldman recently wrote a post about the redistributive effects of inflation. It was pretty standard, Econ 101 stuff. Inflation redistributes wealth from nominal savers to nominal borrowers, etc. Nothing controversial, from the standpoint of any economics department or blog. I don't think even Marxists would argue.

But here is a forum thread from the "Market Ticket Forums" - which appears to be a finance forum - discussing Steve's post. I will excerpt some of the forum posts below.

Who is this jack wad?...That's one of the closest things to pure evil, masquerading as "economics," that I've ever read. The statists who rationalize the Nanny State nowadays, having been grafted onto the same Marxist roots, are way slicker than the Commies ever were in their heyday. And IMHCO in the long run, more dangerous. Much more...

Somehow the destruction of the country's capital base via such bullshit isn't factored into this f*****'s [(Waldman's)] computer model.

The thought that a few elite "brainiacs" can supplant the operation of the price mechanism by the free market, which is the product of the collective brainpower of EVERYONE who buys and sells is EVIL.

They are full of shit and their silence cannot come soon enough...

The benefit of hyperinflation is that these people are silenced for another 75 years.
The downside is that so is everyone else...

You guys should know that [Waldman] was invited to the Treasury to meet with Geithner along with Yves [Smith] and couple of other bloggers a few years ago.


gov is trying to "pick winners" by keeping prices (and wages) high(er) some sectors while attacking prices & wages elsewhere. That does indeed set up a vicious dynamic; but the root cause is gov picking winners & losers.


Mindbogglingly stupid. Just have the government provide everything, then you don't even need prices!! Gimme a Nobel!!...

Never read [Waldman's] blog. He's into Nominal GDP like it's a god, not much different from MMT and their accounting identity worship.

"The destruction of the country's capital base"??? What does that even mean? Hyperinflation? Really? And how is NGDP targeting a form of "picking winners"??? Charitably speaking, these people do not seem to be informed by mainstream economics discourse. Uncharitably, they are nuttier than a Whole Foods trail mix bulk bin.

Now, if it were just a few fools on a forum, I would dismiss it. I'd even dismiss an entire forum full of fools (look at the rest of the threads on the site and you'll see what I mean). But I swear I've seen similar ideas popping up everywhere - in my facebook feed, in casual conversations, elsewhere on the net. And all of these people say the same things. Hyperinflation is just around the corner. Paper money is a Ponzi scheme. The Fed is evil, etc.

And the thing is, these Bizarro Economics Worlders seem to really like talking about economics. They have a lot of opinions and ideas on the matter. They are very convinced of the authoritativeness and correctness of these ideas. And they assert them incredibly strongly and frequently.

Who the heck are these people? I know some mainstream economists (Steve Williamson) who think that montetary policy basically can't stabilize the economy, and who worry about inflation. I know of people who say that we worry too much about unemployment and not enough about inflation (Narayana Kocherlakota, Charles Plosser). I know of models in which monetary policy only causes inflation (RBC).

But I don't know anyone who disagrees with the idea that unexpected inflation redistributes wealth from nominal savers to nominal borrowers. That is just obvious to any economist. But these Bizarro Economics World people seem to think that this assertion is somehow an endorsement of industrial policy, central planning, etc.

It is really bizarre. I have never seen anything like it. Not even Marxists are this weird.

Is there a secret cabal of Dark Economists out there, providing these people with their talking points? From what intellectual source do the Bizarro ideas emanate? Where is the pulsating pit of extra-dimensional energy that sends forth its tendrils into our reality, creating the Bizarro Economics World?

Help me, Normal Econ Blogosphere. I am really confused.