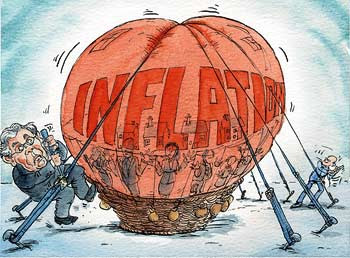 John Cochrane responds here to a Brad DeLong jibe about inflation predictions. To make a long story short, back in 2009 Cochrane predicted inflation, it hasn't happened yet, and DeLong made fun of Cochrane for that fact. Cochrane essentially has two responses:

1. The inflation prediction was (and is) a statement about risks, not a time-specific forecast.

2. The large federal debt and deficit mean that unless our economy grows rapidly, we must inflate, and hence a period of higher inflation is highly likely at some point.

Regarding Point 1, this is a very fair retort. Predictions are not necessarily forecasts. Saying "we are probably in a bubble that will burst sooner or later" is a different thing from saying "the bubble will burst at 10:36 A.M. next Thursday". I think people instinctively demand too many forecasts and not enough other kinds of predictions from macroeconomic models.

(Of course, when you make a vague prediction like "inflation is likely to come sooner or later," you don't get nearly as many smart-points for being right, because most things happen if you wait long enough. But if that sort of vague statement is the best we can do, it's the best we can do, and the poor forecasting power of existing macro models doesn't leave us with much.)

Regarding Point 2, it is not clear to me that this is true. Let me explain why:

A. If you have a high amount of debt but no deficit, you can pay it off without high inflation or rapid growth. It just takes a really long time. But it's perfectly possible.

B. A high deficit does not require either inflation or growth to go up in the future. Why? Because you can cut the deficit.

So, here's a perfectly possible scenario: We temporarily run a high deficit. Then we balance the budget after that. We have a bunch of debt. Growth remains slow and inflation remains low. Over time, we very slowly pay off the debt, without defaulting, growing faster, or causing higher inflation.

So I don't agree that our current debt and deficit, even in combination, imply that either inflation or fast growth is coming. We could just balance the budget.

Also, an unrelated point - which I am allowed to make, because This Is Blogs. Cochrane makes another statement that caught my eye:


Growth economics is unanimous: You get [fast] growth only from higher productivity, and from letting new innovative competitors dethrone established interests.

I'm not sure I agree with this (maybe I'm disagreeing with John, maybe with growth economics). The part about productivity is right. But the part about letting innovative competitors dethrone established interests? I'm skeptical. Look at Japan and Germany. Japan, I know, protects established corporate interests, to the point of tossing upstart entrepreneurs in jail. Germany I know less about, but I know that turnover among its big companies is quite low. But since 2000, both Germany and Japan have grown more strongly, in real per capita terms, than the U.S. And the U.S. grew rapidly in the 50s and 60s without nearly as much industrial disruption as we have today.

I don't think we know much for sure about the relationship between industrial disruption and productivity growth. It might be better sometimes and worse at other times.


Update: Brad DeLong responds, noting that markets never expected high inflation, in 2009 or since. someone who says inflation is a danger, DeLong claims, should provide a compelling reason why the universe of investors disagrees. He writes:

Thus, Noah, I really do not think it is "a fair retort" to say:


This is a point I've made before. And it's one reason why I don't agree with the predictions of Cochrane and other inflation-worriers. That said, I am not as strict as Brad about demanding that people provide compelling explanations for asset mispricings. Housing was mispriced in 2005 and 2006, and we don't really know why, though there are all kinds of explanations. Similarly, market opinions can shift quickly. So I stand by what I said; although I personally think a burst of high inflation is very unlikely over the next decade, if high inflation does come, Cochrane will look "smarter"...though the longer we have to wait for that inflation, the more likely it will be that Cochrane just got lucky.

What I'm saying is that you can have a "pressure model" in your mind, where printing more and more money causes a higher and higher likelihood of high inflation, but the start of the inflation is still a random shock. This appears to be the sort of model that Cochrane has in mind, much like when Bob Shiller said "this is a housing bubble, the more prices go up, the higher the likelihood that they will experience a steep crash." It's harder to say whether the person making the prediction was smart or just lucky, even when the prediction comes to pass.
Author: Noah Smith Posted at 4:18 PM