Something Big happened in the early 70s

Dissertation successfully defended (it won't be official until I complete the byzantine formatting requirements, but that will happen in a couple days), so back to blogging slash getting ready to teach finance to MBAs...

Reading Paul Krugman this week, I found that a question that has often nagged me is nagging me more than usual. Take a look at these two graphs that Krugman put up: 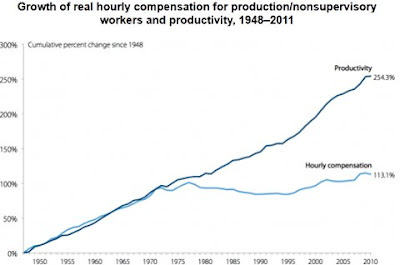 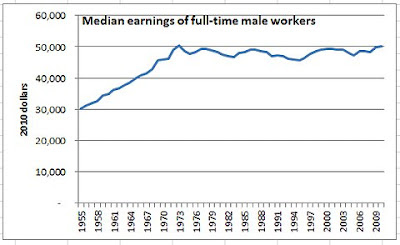 Yes, I know that trends in squiggly lines can be illusions. They might not represent anything structural. "The trend is your friend until the bend at the end," as they say. But WOW, doesn't it look like there was some sort of trend break in the early 1970s? Also, that Krugman graph shows labor productivity, but if we look at Total Factor Productivity, here is what we see: 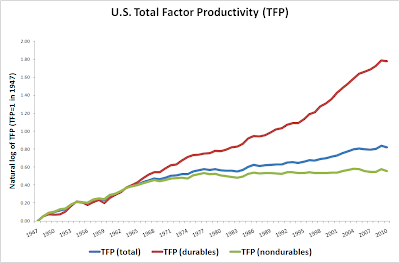 Now, this is not exactly couched in the careful, formal language of macroeconometricians, but it seems like Something Big happened in the early 1970s.

First, there are a few candidate "trend break events" that seem dubious to me. The first is a general technological slowdown, a la Tyler Cowen. It does not seem very likely that the "low hanging fruit" of science would suddenly run out within a two-year period. Also, the "neoliberal"/Reagan policy revolution seems an unlikely candidate, since that happened after 1980. Finally, the entry of women into the workforce was slow and steady.

The decline of unions has been postulated as a cause. And there does look to be an especially steep dropoff in membership in the late 70s: 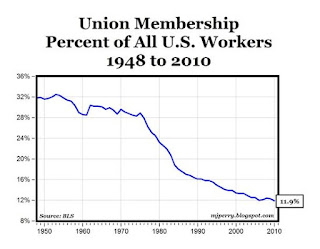 But this is a bit problematic too, because A) the trend break seems to come a few years later than the earlier ones, and B) it's not clear that union-bashing policies were in place in the early 70s. I guess I wouldn't rule this one out, but my intuition is that it was a result, not a cause, of the Something Big.

This leaves me with two candidate explanations for the possible early-70s trend break. These are the end of Bretton Woods in 1971, and the Oil Crisis in 1973.

The end of Bretton Woods seems like a big deal. It ushered in the era of floating exchange rates and ended the de facto gold standard that had prevailed since WW2. Why would this have held down wages in the U.S.? Well, it might have allowed the start of globalization, which began to add labor-rich, capital-poor countries to the rich-country trading system, thus holding down wages via factor price equalization. The catch-up of Europe and Japan in the 70s and 80s, and then of China et al. in the 2000s, might have held down U.S. wages as these countries' catch-up productivity gains outpaced their wages. Alternatively, exchange rate risk must have spiked after the end of Bretton Woods; this could have reduced investment as a percent of GDP, raising the return on capital relative to labor, while simultaneously decreasing nondurables TFP via endogenous growth effects. I'm not quite sure if either of these mechanisms holds up under close scrutiny, however.

The Oil Crisis of '73 seems like a big deal. It represented the start of an era of highly variable energy prices. Since energy is an input for basically everything, lots of people have speculated that higher (and more variable) energy costs have caused a general productivity stagnation. Peter Thiel puts the argument thus:


[W]e've had basically no progress on energy.  And if you think about where oil prices were in 1973, it was $2 or so a barrel, it is now at north of $100 a barrel, and so you've had sort of a catastrophic failure of energy innovation.  And it's basically been offset by computer innovation.  I think that's sort of the simplified account of what's happened in the last 40 years.

This more limited version of the "Great Stagnation" hypothesis seems much more likely to me than the more general "end of science" version.

So there are two possible culprits for the Something Big that happened in the early 70s. Of course, even if one of these is the villain, it's possible that it's only a proximate cause for something more fundamental. The end of Bretton Woods may have been an inevitable, necessary response to increasing globalization that was made possible by falling transport costs, maybe due to the invention of containerized shipping (and, later, the internet). The rise in oil costs may have been due to increasing extraction costs and decreasing discoveries, and floating exchange rates might themselves have played some sort of role. The question of which "shocks" are truly fundamental, or truly "structural", is a bit like the question of whether guns kill people or people kill people.

But the important point is, something happened in the early 70s that seems to have been a trend break in how our macroeconomy works. We should be examining economic theory and econometric evidence, in ways far more careful and thorough than this blog post (or any blog post), for clues as to the processes that caused the trend break. If necessary, we may have to modify our theories...but isn't that always the case?

Update: It looks like Daniel Kuehn did a very similar blog post about a month ago, and came to some of the same conclusions...
Author: Noah Smith Posted at 1:10 PM