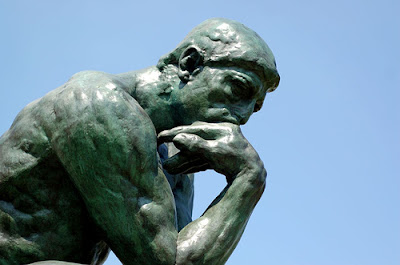 ...Well, not actually all of modern macro. Just the way that modern macroeconomists define the "business cycle". But since the "business cycle" is the phenomenon that macroeconomists want to explain, this is really key, and it's something that doesn't get talked about a lot. So go read Steve Williamson; the post is really quite excellent, you will learn more about modern macro from reading it than from days of reading a graduate textbook. After you are done reading, then come back and continue this post.

BUT, here's the thing...the economy seems to do steadily better and better over time. Only rarely do things get so bad that we actually produce less stuff than the year before. So people often think of the economy as containing a "trend" - some underlying force making us do better and better - and a "cycle" - some random thing that makes the economy do even better than the trend, or even worse, for a short while before going away.

The Hodrick-Prescott "Filter" (or H-P Filter) does not clean your water supply. It is a method for turning a time-series - say, GDP - into a "cycle", by subtracting out the "trend". If you are a "business cycle theorist", what you do for a living is basically this:

Step 1: Subtract out a "trend"; what remains is the "cycle".

Step 2: Make a theory to explain the "cycle" that you obtained in Step 1.

The H-P Filter is just a method for doing Step 1. You take a jagged time-series and you smooth it out, and you call the smoothed-out series the "trend". That's it. Whatever is left you call the "cycle", and you make theories to try to explain that "cycle".

But how much do you smooth? That's a really key question! If you smooth a lot, the "trend" becomes log-linear, meaning that any departure of GDP from a smooth exponential growth path - the kind of growth path of the population of bacteria in a fresh new petri dish - is called a "cycle". But if you don't smooth very much, then almost every bend and dip in GDP is a change in the "trend", and there's almost no "cycle" at all. In other words, YOU, the macroeconomist, get to choose how big of a "cycle" you are trying to explain. The size of the "cycle" is a free parameter.

Now, let's think about those explanations. One such explanation is the original RBC ("real business cycle") model, invented by the same Prescott who invented the Hodrick-Prescott Filter. This model won Prescott a Nobel Prize in 2004. I've criticized the RBC model, but let's forget about that criticism for now. How did Prescott show that his model explained the business cycle? What he did was this: First, he chose some values for the parameters in the RBC model that seemed reasonable to him ("calibration"). Then, he simulated an economy with the RBC model, and measured the size of the simulated fluctuations that it produced. Finally, he compared the size of those fluctuations with the size of the "cycle" that he got out of an H-P Filter, and decided that the two were pretty close in size. Thus, he concluded, the "cycles" of economic activity that we see in the real world could be generated by the RBC model, and hence the RBC model was a good one.

Now, I've criticized this method of validating models (which is called "moment matching"). But let's put aside that criticism for now, and think about the H-P Filter. Remember that we get to choose how much to smooth the time-series. The less we smooth, the smaller the "business cycle" becomes. So, up to a point, by choosing how much to smooth, we can choose to make the business cycle as big or as small as we like!

So what Prescott did was:

A) Chose how big of a "business cycle" he wanted to model,

B) Built a model of business cycles that produced fluctuations of about the size he chose in step A, and

C) Claimed to have explained the business cycle.

Now this may sound like a big fat hoax, but it's not quite. The amount of smoothing in the H-P filter is a free parameter, but if you choose it too big or too small, people will be skeptical. After all, we have other measures of recessions, like the "NBER recessions". If you smooth so much or so little that your "cycles" don't coincide at least roughly with those recessions, people won't buy your theory. They will say "Aww come on, really?" And in fact, some people responded that way to the RBC theory when it came out. But a critical mass of people gave it credence, which is why it became the basis of most subsequent models of the business cycle, and won a Nobel Prize.

Doesn't it seem to you that this way of doing "science" is a little too vulnerable to cultural/political biases among the body of practicing macroeconomists? It seems that way to me. But maybe I am wrong.
Author: Noah Smith Posted at 3:28 PM