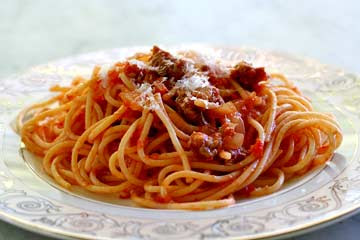 Via John Cochrane, I see that Kip Hagopian and Lee Ohanian have written a lengthy article about inequality. It's hard - no, impossible - for me to summarize the thesis of the piece, because it's basically a huge smorgasbord of loosely related, unrelated, and even contradictory reasons why the United States government should not redistribute income. Basically, the arguments of Hagopian and Ohanian can be broken down into the following list:

3. Consumption inequality has decreased, not increased.

5. America's inequality hasn't increased as much as that of other rich countries.

6. Attempts to reduce inequality by redistribution will lower GDP.

(The article goes on to talk about taxes, how the rich pay more than their fair share, how the rich are "job creators" and taxing them will hurt the poor, and how what we really need to do is fix the K-12 education system.)

It seems to me that Hagopian and Ohanian have flung a bunch of spaghetti at the wall to see what sticks. Anyone looking for a reason to oppose redistributive taxation will probably find something to like within this multitude. Indeed, I myself agree with about half of these points (if you're interested, I basically agree with 1a, 1b, 1c, 2b, and 4a).

But that doesn't make the article a coherent argument. Think about these questions:

* If inequality has been mismeasured and/or has gone down, why do we need to say it's irrelevant and/or a good thing?

* If inequality has been mismeasured and/or has gone down, why do we need to explain why it was inevitable that apparent inequality went up?

* If inequality is irrelevant and/or a good thing, why do we need to argue that its rise was unavoidable?

There's no thesis here, other than the idea that "income redistribution is bad." I think this reduces the credibility of the authors. Hagopian and Ohanian clearly started from a policy conclusion  ("income redistribution is bad") and went in search of reasons why this might be true, then went in search of data that supported those reasons. That's exactly the reverse of how I think scientists ought to do things. First you look at the data, then you make sense of it, and then you decide which policy makes the best sense. The fact that Hagopian and Ohanian seem to have done the reverse of this makes me think "Oh, here are another couple of guys who want lower taxes on the rich, and will grab hold of any theory or statistic that seems like it supports lower taxes on the rich."

So even though, for me, some of the arguments were convincing - i.e., some of the spaghetti landed in my mouth, and the rest on my shirt - the scattershot nature of the argumentation makes me less likely to buy into the overall policy conclusion. I don't think this is how economic policy advice should be done.
Author: Noah Smith Posted at 9:39 AM