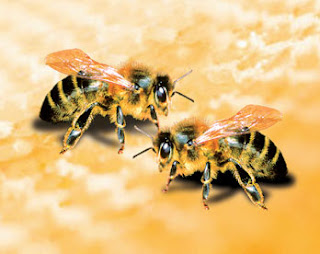 One common racist characterization of East Asians is that they are hive creatures, working and thinking collectively like bees or ants, lacking individuality or creative thought. This trope has always annoyed me, but after I lived in Japan, and saw Japanese people behaving more individualistically than most of the Americans I knew, it really became my pet peeve. So you can understand why I am predisposed not to be particularly charitable toward papers with titles like "National IQ and National Productivity: The Hive Mind Across Asia".

The paper, written by Garett Jones of George Mason University and published last year in Asian Development Review, does not argue that people in East Asian countries are unique in forming a "hive mind". It simply claims that they are better at it. The paper's thesis is that IQ is a fundamental ingredient for many of the things that make a country rich. High-IQ people, Jones argues, 1) are more patient and hence tend to save more, 2) cooperate more, and 3) support more free-market policies.

Cooperation is what Jones labels the "hive mind". It's interesting that he chooses to make the "hive mind" phrase part of the paper's title, since the result about cooperation is only one among several main points in the paper. Why? I'm guessing that the existence of the racist "Asian hive mind" trope is not irrelevant to Jones' choice of title. Economists often style themselves as bold, iconoclastic free-thinkers, willing to think and speak the truth when others are constrained by political correctness. To fulfill this self-image, they often go out of their way to say politically incorrect things. This in turn leads other people (i.e. liberals) to respond emotionally, which reinforces economists' self-image of themselves as rational thinkers, and also reinforces their public reputation as racists, sexists, etc. It's a stable equilibrium. But really it just represents an elaborate form of mugging for attention.

Anyway, on to the substance of Jones' paper. The first main claim is that high IQ leads to patience (think of the marshmallow experiment), and hence to higher rates of savings and higher capital-to-output ratios. Well, that may be true, but I feel like it ignores the time-series aspect of the data. For example, few would argue that Japan's average national IQ has dramatically decreased over the past 30 years. But their household savings rate has plummeted from over 16% in 1980 to 2% or less today: 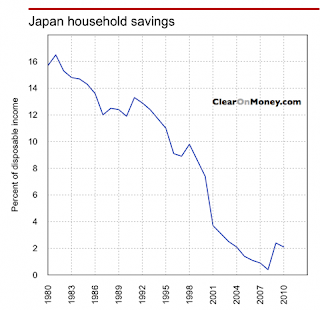 This means Japanese households now save less than American households. How can we square this fact with Jones' IQ-patience-savings based theory of national wealth? I'm not sure we can. Even if IQ does have an effect on savings, we can't expect it to dominate over long periods of time.

Next, Jones makes the argument that high-IQ people cooperate more, and that cooperation raises national wealth. To support this, he cites a large number of game-theory experiments. But it is far from clear to me that this kind of small-group cooperation can easily scale up to the level of a nation, or even a corporation. Again take the example of Japan. Though most Westerners think of pre-modern Japan in terms of its unified and isolationist Edo Period, that was actually just a brief aberration after a long history of bloody internecine warfare, samurai intrigue and assassination, and factionalist strife. In World War 2, Japan's inter-service rivalry put America's to shame, and military staff meetings would often end in brawls between Army and Navy officers. In modern Japanese corporate culture, the public face of harmony is loosely plastered over a seething morass of factionalism that makes it notoriously difficult for Japanese companies to match the nimble strategic shifts of American firms. And don't even get me started on Japanese politics.

So while I don't deny that Japan is reknowned for small-group cooperation, even if we grant Jones' hypothesis that this cooperation is driven by high IQs, it does not seem always to scale up to larger groups.

Finally, Jones contends that high IQs correlate with support for free-market policies. (This is interesting, since free-market policies seem to be a sort of individualistic belief, the opposite of what you think of when you hear the words "hive mind". Wonder why "Asian Individualism" didn't make its way into the title?) The data here is a paper by Jones' fellow George Mason economist, Bryan Caplan. However, that paper used data only from the United States. It is frankly absurd to argue that the results can be extended to whole nations. Why is it absurd? Because if you try, you'll see that plain, well-known facts baldly contradict Jones' thesis. Using Jones' IQ data set, Scandinavian countries have higher average IQs than America. So if Jones is right, Scandinavia should be more pro-free-market than America. But the opposite is true. (And East Asian countries, while less socialist than Europe nowadays, were not exactly known for their embrace of free markets in the 20th Century.)

Oh, and let's talk about Jones' data set. His data on national IQ comes entirely from the work of Richard Lynn. In his 2002 book, IQ and the Wealth of Nations, Lynn shows North Korea as having a higher national average IQ than Sweden. First of all, right off the bat, that tells me that Lynn's methodology must be crap on a stick. Second of all, it strongly suggests what that methodology in fact was - it's pretty clear Lynn just assumed that since North Koreans are the same race as South Koreans, they must have a similar national average IQ. In other words, Lynn's "data" basically just uses "IQ" as a polite term for "race". (By the way, many others have looked at Lynn's dataset much more closely than have I, and have reached conclusions similar to mine; see, for example, here and here. Hat tip to Cosma Shalizi for pointing these out in an email).

Anyway, in addition to making a few questionable or downright silly arguments, Jones' paper does not do a lot to dispel the "economists are racists" stereotype. What it does do is strengthen my belief that there is a "hive mind" of a different sort at work in certain corners of the economics profession - a self-propagating set of conventional wisdoms and stereotypes that manages to leap from researcher to researcher, department to department...

Update: I really should also mention that part of my antipathy toward this paper comes from the fact that I'm about to come out with a column in support of higher Asian immigration, which Jones also calls for at the end of his paper. I just do not want to be tarred by association with this kind of "research"...
Author: Noah Smith Posted at 11:26 PM