Acemoglu and Robinson versus the blogs 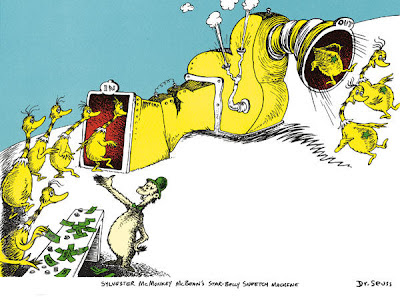 Daron Acemoglu and James Robinson have a paper out (with Thierry Verdier) about different "flavors" of capitalism and how these  flavors could affect innovation. Specifically, they compare the "cuddly" capitalism of Europe to the "cutthroat" capitalism of America. First they make a simple mathematical model to show how more socialist "cuddly" countries like Sweden can act as parasites, leeching off of the innovations produced by the freewheeling "cutthroat" nations. Then they "test" their model by showing that the U.S. patents more stuff than Scandinavian countries.

This paper drew criticism from a number of bloggers. For example, here Lane Kenworthy asked: 1. What about alternate measures of innovation in which Scandinavian countries score close to the U.S.?, and 2. Wasn't the U.S. more "cuddly" back in the 70s, and weren't we just as innovative back then? And here, Matt Yglesias alleged that patents are a crummy measure of innovation.

[There is a] divide between what the academic research in economics does — or is supposed to do — and the general commentary on economics in newspapers or in the blogosphere. When one writes a blog, a newspaper column or a general commentary on economic and policy matters, this often distills well-understood and broadly-accepted notions in economics and draws its implications for a particular topic. In original academic research (especially theoretical research), the point is not so much to apply already accepted notions in a slightly different context or draw their implications for recent policy debates, but to draw new parallels between apparently disparate topics or propositions, and potentially ask new questions in a way that changes some part of an academic debate. For this reason, simplified models that lead to “counterintuitive” (read unexpected) conclusions are particularly valuable; they sometimes make both the writer and the reader think about the problem in a total of different manner (of course the qualifier “sometimes” is important here; sometimes they just fall flat on their face).

Well, first of all, I disagree with the idea that counterintuitiveness is inherently good when evaluating academic research; growing up, I argued this point at length with my dad, who is a cognitive psychologist. But this is neither the time nor the place for that argument.

Instead, I want to make two points.

First, I want to point out that Acemoglu and Robinson's theoretical result is not very counterintuitive. The notion that there is a tradeoff between innovation and redistribution is quite a commonly-held belief. In Acemoglu and Robinson's theoretical model, this idea is a built-in assumption; is is not the result of the model, it is the model's starting point. To see this, just check out Section 2.2 on "Reward Structures". The authors assume that the reward to entrepreneurship (entrepreneurs are the same as innovators in their model) depends on the degree to which a country lets winners win and lets losers lose. The entrepreneurs decide how much effort to put out - if they try harder, they have a bigger chance of succeeding.

To my knowledge - and if I am wrong, please correct me! - this reward structure and this "return to effort", are not taken from any microeconomic study of entrepreneurial behavior; they are just something the authors wrote down.

Why did they write them down? A cynic would say: "Because these assumptions made the model work out the way the authors wanted it to", but I am not such a cynic. Instead, it seems to me that they wrote down these assumptions because they were intuitively plausible. It makes intuitive sense that the bigger the risk from losing, the more people will try hard not to end up being losers. And it makes intuitive sense that the harder someone tries, the better they do.

Given these assumptions, the result of the model is not hard to predict - when you let losers lose and winners win, innovators try harder. Not exactly a shocker, given the assumptions.

So is this model counterintuitive? I argue: No. Instead, it is intuitive. It seems to have been built using intuition, and its results confirm commonly-held beliefs about the difference between "cutthroat" and "cuddly" capitalism. So I don't think it makes much sense for Acemoglu and Robinson to defend their research from the bloggers by saying that the purpose of academic research is to be counterintuitive.

OK, time for my second point. Mark Thoma wondered why Acemoglu, Robinson, and Verdier get the result they get. Isn't it true that entrepreneurs have to take a lot of risk? And doesn't that mean that social insurance, which reduces risk, should encourage entrepreneurs to take more risk, not less? How is it that Acemoglu et al.'s model avoids this effect?

Here is the answer: it's built into the math. The authors assume that the only cost of entrepreneurship is effort. From the paper:

We assume that workers can simultaneously work as entrepreneurs (so that there is no occupational choice). This implies that each individual receives wage income in addition to income from entrepreneurship[.]

How realistic is that assumption? Well, in the real world, entrepreneurs in rich countries have limited liability, and can pay themselves wages out of their start-up capital. This means that many entrepreneurs can earn a wage even as they work to start businesses. But this wage is often much less than they could have earned otherwise, and if their business fails (a statistically likely event), they will be unemployed. So the "no occupational choice" assumption probably reduces the risk of entrepreneurship, relative to the real world.

Also, the authors assume that entrepreneurs do not put up any of their own wealth as startup capital for their ventures, and they assume no heterogeneity between worker/entrepreneurs. This means that it is just as easy - and no more risky - for a poor person to start a successful company as for a rich person to do so.

So to sum up my second point, Acemoglu, Robinson, and Verdier have assumed a model in which:
(No wonder liberals were not happy about this model, eh?)

So the model is not counterintuitive. But is it a good model? Does it help us understand the world? Here we have to turn to the data. The data tell us that America issues more patents than Scandinavian countries. Is that good enough? Even if patents are a good measure of innovation (i.e., if Matt Yglesias is wrong), and even if cross-country comparisons are valid, and even if such a small sample were enough to make a statistical inference, I'd still say we have a problem here. Why? Because Acemoglu, Robinson, and Verdier were almost certainly aware of the patents data before they wrote their paper. It is quite probable that the patenting disparity between the U.S. and Scandinavia is what inspired their paper. And one cardinal rule of scientific theorizing is that your model should be tested on data other than the data used to construct the model.

In other words, Acemoglu et al. have not yet succeeded in explaining anything about the world. They have looked at the world, and then used plausible sounding assumptions to create a model whose results fit what they observed. But they have not yet tested whether that model can be used to predict things other than the original observation. Until they do that (or someone else does it), their theory should not be believed.

Anyway, I think I'm done talking about this paper. I am NOT trying to say that Acemoglu and Robinson are wrong, or that they have made any mistakes in their research. What I am trying to do is to illustrate the usefulness of blogs. Even if I've made some mistakes about the particulars (and I may have!), I hope I've shown that blogs, while not a substitute for academic research, do have something to contribute to the academic discussion - by pointing out assumptions, identifying relationships between assumptions and conclusions, discussing alternative assumptions, and evaluating the current status of the research. This is much more than just "distilling well-understood and broadly-accepted notions", which Acemoglu and Robinson claim to be the purpose of blogging.

Update: Some people apparently have been thinking that I'm accusing Acemoglu et al. of political bias. I am doing no such thing. Acemoglu et al. almost certainly just want to demonstrate a neat idea they had (the "asymmetric equilibrium" between "cutthroat" and "cuddly" countries). Demonstrating that, though, requires a model whose assumptions are bound not to be very pleasing to liberals...although again, that's not necessarily the only reason that liberal bloggers criticized the paper. In econ, a lot of accusations and counter-accusations of political bias are always flying around, but I like to keep those to a minimum.
Author: Noah Smith Posted at 5:50 PM