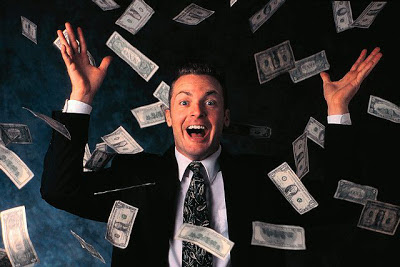 Have you ever heard people say that "money is just little green pieces of paper"? Well, that is exactly what Steve Williamson claims in this post. Most of the post is an anti-Krugman volley, but buried in one of Steve's points is the following extremely interesting claim:


What is a bubble? You certainly can't know it's a bubble by just looking at it. You need a model. (i) Write down a model that determines asset prices. (ii) Determine what the actual underlying payoffs are on each asset. (iii) Calculate each asset's "fundamental," which is the expected present value of these underlying payoffs, using the appropriate discount factors. (iv) The difference between the asset's actual price and the fundamental is the bubble. Money, for example, is a pure bubble, as its fundamental is zero. (emphasis mine)

Can this be true? Is money fundamentally worth nothing more than the paper it's printed on (or the bytes that keep track of it in a hard drive)? It's an interesting and deep question. But my answer is: No.

First, consider the following: If money is a pure bubble, than nearly every financial asset is a pure bubble. Why? Simple: because most financial assets entitle you only to a stream of money. A bond entitles you to coupons and/or a redemption value, both of which are paid in money. Equity entitles you to dividends (money), and a share of the (money) proceeds from a sale of the company's assets. If money has a fundamental value of zero, and a bond or a share of stock does nothing but spit out money, the fundamental value of every bond or stock in existence is precisely zero.

So it's a weird way of thinking about the world...but is it correct?

If it's the latter, then why doesn't money have fundamental value for the exact same reason? After all, I can use money to buy a toaster, then use a toaster to make toast, then eat the toast. If the toaster has fundamental value, the money should too.


Update: Brad Delong and Paul Krugman weigh in. Paul suggests a more expansive definition of "bubble", while Brad conjectures about what Steve Williamson might mean. And yes, it feels weird calling Paul Krugman by his first name when we've never actually met...


The payoffs on my stocks and bonds, and the sale of my house, may be denominated in dollars, but that does not mean that the value of those assets is somehow derived from the value of money.

Not in general, no. But if the fundamental value of money is precisely, exactly zero then it does mean that. Any finite number multiplied by zero is still zero, so using Steve's definition of "fundamental value" - whatever the heck that is - the expected discounted present "fundamental" value of the stream of (money) payments from any stock or bond is precisely, exactly zero. As for the definition of "bubble", Steve claims that I disagree with his definition ("price > fundamental value"), but actually I do not disagree; that is one of the two main definitions out there (the other being "a rapid rise and crash of prices"), and I think it's perfectly fine.

Update 3: Nick Rowe has some thoughts.

Update 5: David Andolfatto attempts to rebut my claim that if FV(money)=0, then the FV of most financial assets is also identically zero. Here is his attempted rebuttal:


What of Noah's claim that if money is a bubble, then nearly every financial asset is a bubble? This just seems plain wrong to me. Financial assets are typically backed by physical assets. For example, the banknotes issued by private banks in the U.S. free-banking era (1836-63) were not only redeemable in specie, but they constituted senior claims against the bank's physical assets in the event of bankruptcy. Mortgages are backed by real estate, etc.

Update 5: Steve Williamson finally does provide a definition of fundamental value, cribbing from Allen, Morris, & Postlewaite (1993) (which, by the way, is an excellent paper which you should read if you have time):


To summarize, we are arguing that the fundamental value of an asset is the present value of the stream of the market value of dividends or services generated by that asset.

It's not the definition I'd choose; I'd include the redemption in the fundamental (in which case money would have a positive fundamental, since you can "redeem" it for itself). But "fundamental value = dividends" is a perfectly consistent definition. Great! Steve also writes:


I'll leave you to judge whether Allen, Morris, and Postlewaite are better or worse economic theorists than Paul Krugman or Noah Smith.

I can resolve half of this question for you right now: Allen and Morris (and almost certainly Postlewaite, though this is the only paper of his I've read) are better theorists than I am. All you aspiring theorists out there, take a lesson from those guys, and remember to define your terms explicitly and precisely!
Author: Noah Smith Posted at 7:11 PM