Why I love Michael Moore 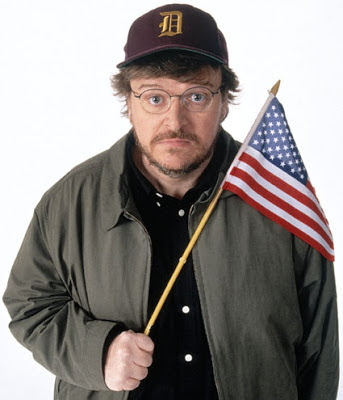 I've seen four Michael Moore films: Roger and Me, The Big One, Bowling for Columbine, and Sicko. I've seen him speak twice, once when I was in the Stanford Speakers' Bureau and helped bring him to campus, the other time at Michigan. Every film of his that I've seen has made a big impression on me and changed my thinking in some important way. Every time I've seen him speak, I have come away more sympathetic to his worldview.

Roger and Me is, in my mind, the definitive window into the Rust Belt. It is absolutely heart-wrenching; I dare you to watch the famous "rabbit scene" and not feel a wave of despair. Here's what it's really about: In the 1980s, foreign competition, shifting trade patters, and new technology conspired to break the power of manufacturing unions, end the "corporate welfare state", and relegate much of America's middle class to a new lower middle class. At the same time, we made the conscious policy choice not to use wealth redistribution to compensate for those changes. To economists, these things are just mathematical models and historical facts, but in the real world, they had enormous human costs. Roger and Me makes you look those costs right in the face. That's something I believe every economist should be required to do.

The Big One is a sort of coda to Roger and Me, showing the effects of globalization and deregulation on America's labor markets (and on the real human beings who populate those labor markets).

Bowling for Columbine is about America's gun culture. I don't think it does a good job of explaining America's extraordinary levels of gun violence, most of which is involved in the drug trade, and relatively little of which is committed by the type of gun nuts depicted in the film. But I do think that Bowling for Columbine sheds light on a very dark corner of American culture - white supremacist and secessionist militias - that causes a hefty amount of human suffering in the present and could be very dangerous for our national security in the long run.

Sicko is about America's health care system, and the alternatives. Before I saw Sicko, I believed the common line that, for all its flaws, America's health care system was "the best in the world". After I saw the movie, I did not believe anything of the kind. Sicko opened my eyes to the existence of Britain's National Health Service; after watching the movie, I looked into the NHS, and found that it achieves better results than the U.S. on almost any outcome measure, for far fewer costs. Importantly, it does this using a rational incentive system - doctors are paid for improving the health of their patients, not for recommending large numbers of expensive services.

I'm not sure, but around the same time that I stopped believing that America had the best health system in the world, I noticed that other people stopped saying it (and in fact started saying the opposite!). Around the same time I started thinking that Britain's NHS is the best alternative, I noticed a lot of policy-wonkish people praising that system in the press. Around the same time I started realizing the insanity of the "fee for service" incentive system, everyone started talking about it. So I wonder if Sicko, rather than just changing my mind, actually changed the whole national conversation about health care. If so, that would make it one of the most politically influential films of all time.

So Michael Moore A) shows slices of life that reveal the real human consequences of economic policy choices, and B) raises important policy issues. And he does this while managing to be entertaining enough to hold an audience's attention. In my opinion, this makes him an important and positive figure in America today.

But it has recently come to my attention that there is quite a lot of anti-Moore sentiment out there. As with anyone who becomes a favorite media target, it is not obvious what Moore has done to deserve being "hated on" to such an extent. Here are some possible reasons not to like Michael Moore, and why I think each one is not a very strong reason.

1. "Moore advocates bad economic policies." Michael Moore talks like a fire-breathing socialist - he criticizes the profit motive, demonizes big business, and even praised Cuba's health system. And watching his movies and listening to him speak, it quickly becomes apparent that Moore doesn't have any coherent alternative to Anglo-Saxon capitalism - no, good middle-class manufacturing jobs are not going to be brought back by the generous altruism of corporate CEOs.

But I don't mind. Because Moore is a filmmaker, not an economist. Because I think it is perfectly fine to show problems without offering solutions. Simply alerting people to a problem is a valuable social service. And making people witness and understand the downsides of the tradeoffs they make - like keeping America's productivity growing at the expense of the lifestyles, self-worth, and communities of millions of workers - is a valuable social service. You don't need to replace capitalism to show the flaws in the American flavor of capitalism.

2. "Moore distorts the facts". Somewhat predictably, this criticism seems to be made mostly by people who appear to have no problem with the Alternate Reality Bubble in which the entire conservative movement has recently encased itself, in which lying in support of conservative policy goals is regarded as a virtue. So I take claims that Moore plays fast and loose with the facts with the same grain of salt that I take the "Krugman Truth Squad", the mercifully short-lived and utterly bullshittinous National Review column from ten years ago. Somewhat unsurprisingly, a quick Google search for "Michael Moore fact check" reveals that Sicko is not too shabby in the accuracy department. Reading the websites dedicated to showing that Moore is a liar, I find that many of the supposed lies are actually either A) juxtapositions that the critic thinks are misleading, but seem perfectly legitimate to me, or B) simply things the critic disagrees about, like whether America has a high murder rate. Only rarely do I see something that looks like it might be an actual intentional distortion.

(A note, however: Much of the criticism of Moore's factual accuracy seems to be made with regards to his film Fahrenheit 9/11, which I have never seen, mostly because I heard bad things about it from everyone I asked. So maybe that movie makes more fibs than the others?)

So this criticism might be true - and if true, it is of course a legitimate criticism - but I haven't seen solid evidence for it yet.

3. "Moore is a hypocrite". Here's a guy who criticizes the rich, and has gotten rich off of his successful movies. This criticism doesn't really bother me, for at least three reasons I can think of. First reason: Moore criticizes people who get rich by exploiting workers, and he may feel that the workers involved with the production and distribution of his movies are not exploited. Second reason: One person giving up his money is not going to change the system. Third reason: Even if Moore is a total raging hypocrite, who cares? Does that decrease the importance or the quality of his films?? No.

I love Michael Moore professionally. Personally, he may be Earth's douchiest douchebag. I don't know and I don't care. I don't even know the guy.

So while I allow that there might be bigger problems with Michael Moore than I have yet realized, so far I love what I've seen. Feel free to try to convince me otherwise; I am not committed to this point of view...
Author: Noah Smith Posted at 10:45 PM