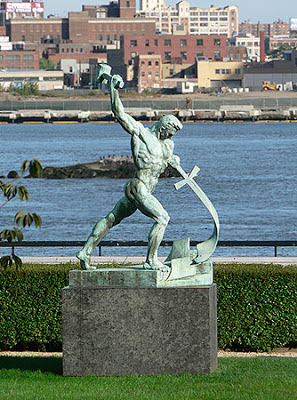 In his new book The Better Angels of Our Nature, Steve Pinker demonstrates that war and violence have declined worldwide, and speculates as to possible reasons why this has occurred. Many people have criticized this conclusion: for example, see Nicholas Taleb. The thrust of all the criticisms is the same:

"Sure, war has declined recently, but the decline may not be structural. A new bout of war could occur any day now. In fact, the very factors that have suppressed war in recent decades may just make future wars more catastrophic."

And this is of course true, as far as it goes. Past performance is never a guarantee of future results; even if there has been a deep structural change that has led to a drop in war, what's to say there won't be another deep structural change that brings war back? And of course it's possible that the current decline in war is just as much an illusion as the macroeconomic "Great Moderation" turned out to be.

Then again, maybe not. Sometimes, structural changes happen that are, for all intents and purposes, permanent. For example, smallpox is now really and truly gone from the planet; it declined and never bounced back. Nor is there any sign of a return to high rates of infant mortality.

So I don't understand the critics of Pinker. Simply pointing out that Pinker does not have a well-verified scientific theory of what drives the grand sweep of history should not blind us to the real phenomenon of declining global violence. Instead of saying "Oh, the Great Moderation was an illusion, this must be too!", we should recognize the reality of the violence decline, and dig deeper in order to root out the structural causes (or lack thereof).

Why might war have declined? The common theories include:

1. MAD: The threat of devastating nuclear retaliation makes war too risky for any major power.

2. Commerce: Global supply chains are just too valuable to disrupt with a war.

These two ideas are often criticized. MAD might simply shunt all the risk of war into the heavy tails, leading to a brittle standoff that eventually snaps and results in a holocaust that more than makes up for all the decades of peace. Commerce has proven to be a flimsy peacemaker in the past, since global trade networks didn't forestall WW1 and WW2.

I agree with these criticisms. But I also see some other possible structural reasons why war might be on the way out. To wit:

3. Low reward of war: Economically, the main benefit of war (other than a stimulus to get one's economy out of a slump!) is seizing of natural resources. But nowadays, natural resources are just not a very valuable prize. Countries with very few natural resources - Japan, Germany, France, etc. - tend to be the richest, while most resource-rich countries are poor. And the 2003 American invasion of Iraq, widely thought to be motivated by a desire for oil resources, ended up not paying for itself via oil. It just wasn't worth it! In the modern economy, wealth comes mainly from physical and human capital, not from land - and you just can't easily seize and exploit an opponent's factories and PhDs (as the Nazis discovered). There's just no benefit to be had from fighting anymore. Of course, this was probably true in WW2 as well, but perhaps now nations have had enough experience losing money on wars to realize that there's no profit in smashing up the means of production.

4. The information age: In the past, countries going to war were highly uncertain about what kind of threat they faced, and so it was much more possible for two opponents to each believe they had a very good chance of victory. Nowadays, with the advent of the internet and other vast sources of free public information, countries probably have a lot more realistic assessments of how likely they would be to prevail in any given conflict. And since countries will tend not to choose war when they think it likely that they will lose, this will mitigate against military adventures. Look how extensively the Bush Administration had to deceive itself and isolate itself from reality in order to persuade themselves that Iraq would be a cake walk!

5. Low fertility rates: There is a clear and well-established correlation between high fertility rates and violence. Yet fertility has declined dramatically in most regions of the country since the 1970s; at this point, only some parts of Africa and a few scattered small countries elsewhere have fertility rates in the 4+ range, which used to be ubiquitous. Fewer surplus "angry young men", more cautious old people, more grandparents to take care of...it all adds up to reduced impetus to war.

6. High monetary costs of war: Weapons are becoming more and more expensive, and so is the energy required to power them. Missiles and drones and ships cost insane amounts of money, but it is no longer possible for great powers to fight wars without these things. This raises the cost of war.

1. Nuclear terrorism: If people get the ability to build nukes in their basements, as in the Vernor Vinge story "The Ungoverned", then all bets are off, because it will be possible for personal rather than national grievances to start very high-casualty conflicts. The same goes for home-made super-viruses.

2. Resource scarcity: We've hit the age of "peak everything", and some resources are getting scarce. Food, in particular, has gone way up in price, and water is becoming scarce in many parts of the world. This will act against Reason 3 above, and raise the return to war, especially for poor countries.

3. Cyberwar combined with automation of nuclear arsenals: This risk should be pretty obvious.

So in conclusion, I see lots of structural factors lining up against war, and only a few lining up in its favor. This doesn't mean that the former will win, and it definitely doesn't mean that we won't see any more big wars. But it points us in the direction that I think we need to look if we want to confirm whether the trend observed by Steve Pinker is structural and durable.
Author: Noah Smith Posted at 7:19 PM