Are jobless recoveries the Fed's fault?

Matt O'Brien (who, in full disclosure, is the guy who recruited me to write for the Atlantic) hypothesizes that the "jobless recoveries" of recent decades have been caused by the Fed. Specifically, he thinks that the Fed has been practicing "opportunistic disinflation", allowing recessions to lower inflation, and then "stabilizing" inflation at a new, lower level after each recession by raising interest rates too soon. Here is the case:

Through the 1980s, postwar recessions happened when the Fed decided to raise rates to head off inflation, and recoveries happened when the Fed decided things had tamed down enough to lower rates. But now recessions happen when bubbles burst...and the Fed hasn't been able to cut interest rates enough to generate strong post-crash recoveries. Or maybe it hasn't wanted to...

Why have interest rates and inflation mostly been falling for the past 30 years? In other words if the Fed has been de facto, and later de jure, targeting inflation for most of this period (and it has), why has inflation been on a down trend (and it has)?...

Say hello to "opportunistic disinflation...The Volcker Fed had come in for quite a bit of abuse when it whipped inflation at the expense of the severe 1981-82 downturn, and the Fed seems to have learned it was better not to leave its fingerprints on the business cycle.

In other words, Let recessions do their dirty work for them.

It's not hard for central bankers to get what they want without doing anything, as long as what they want is less inflation (and that's almost always what central bankers want). They just have to wait for a recession to come along ... and then keep waiting until inflation falls to where they want it. Then, once prices have declined enough for their taste, they cut rates (or buy bonds) to stabilize inflation at this new, lower level. But it's one thing to stabilize inflation at a lower level; it's another to keep it there. The Fed has to raise rates faster than it otherwise would during the subsequent recovery to keep inflation from going back to where it was before the recession. It's what the Fed calls "opportunistic disinflation," and it's hard to believe this wasn't their strategy looking at falling inflation the previous few decades. Not that we have to guess. Fed president Edward Boehene actually laid out this approach in 1989, and Fed governor Laurence Meyer endorsed the idea of "reducing inflation cycle-to-cycle" in a 1996 speech -- the same year the Wall Street Journal leaked an internal Fed memo outlining the policy.

In short: Recoveries have been jobless, because that's how the Fed likes them.

I guess this is a pretty solid case. Fed memos and speeches, combined with the low path of observed inflation. However, I don't believe it.

Why not? Well, there have been three "jobless recoveries" in recent decades: the early-90s recovery, the early-2000s recovery, and the current recovery. Looking at Matt's inflation history graph, we see that in the 2000s, inflation didn't shift to a lower level - so, no "opportunistic disinflation" there (unless the Fed tried and failed!). In the current recovery, the Fed hit the Zero Lower Bound, and inflation actually fell below the Fed's desired rate. So let's look at the one remaining candidate for "opportunistic disinflation" - the early 90s. Here is a graph of the Federal Funds rate over time: 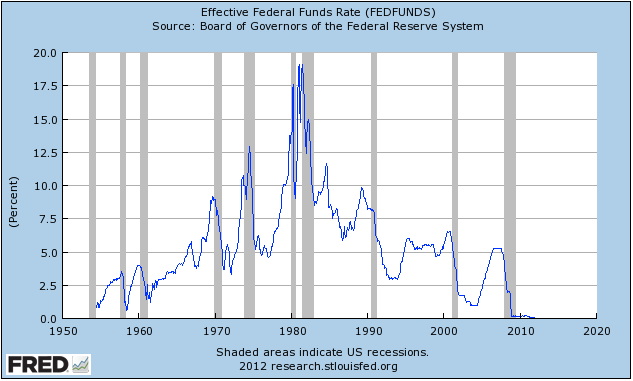 We see that the Fed cut rates during the early-90s recession, and kept cutting then for several years after that. Remember what Matt said: "The Fed has to raise rates faster than it otherwise would during the subsequent recovery to keep inflation from going back to where it was before the recession." According to this principle, the rate rise in 1995 1994 must have come earlier than it would have come, had the Greenspan Fed not been practicing "opportunistic disinflation."

But compared to other recessions, the 1994 rate rise came with a very long lag. In fact, the 1990s recession is nearly unique in that the Fed Funds kept falling for quite some time after GDP stopped contracting. In fact, by the time the Fed started raising rates in 1994, the unemployment rate had already fallen to around its pre-recession level:

In other words, it sure looks like the Fed didn't even start raising rates until after the unusually long "jobless recovery" of the early 1990s was already finished.

Now, of course, it is fashionable these days to say that looking at the Fed's policy rate actually tells us nothing whatsoever about monetary policy. If you believe that the Fed chooses the level of NGDP at all points in time, then by assumption, all "jobless recoveries" were chosen by the Fed, and the policy rate simply did what it had to do in order to produce the observed time path of NGDP.

But I am highly skeptical of this idea.

Actually, in the case of post-Volcker monetary policy, I find the typical story to be the most convincing one. Estimates of the Fed's "reaction function", such as this one by Clarida, Gali, and Gertler in 2000 and others since then, find that the Fed has always seemed to use a "Taylor-type" rule to set policy rates, but that the Fed's rule started putting more of an emphasis on inflation-fighting, and less on unemployment-fighting, since Volcker took over. According to this common received wisdom, the Volcker Recessions convinced America that the Fed wouldn't tolerate inflation, and then higher productivity growth in the 90s enabled Greenspan to keep rates low without causing inflation expectations to come un-anchored. That story would explain the lower inflation observed post-1980 in O'Brien's graph. But it's not the same thing as "opportunistic disinflation", and it would not lead to jobless recoveries, because the Fed would still set its policy rate to respond to the best current estimates of inflation and the output gap.

So while I also think the Fed has probably been a little too focused on inflation since the experience of the 70s, my gut tells me we need to look elsewhere for the source of the jobless recovery phenomenon. My own guess is that financial-based explanations, in particular the idea of "balance sheet recessions", is more compelling. As Matt noted, recessions with "jobless recoveries" (really, just recoveries with sluggish growth) have tended to follow very different kinds of financial events than pre-1990 recessions. Some international comparisons find that recoveries tend to be anemic after a certain kind of financial crisis. If I were a betting man, I'd put my money on that explanation.
Author: Noah Smith Posted at 11:56 AM