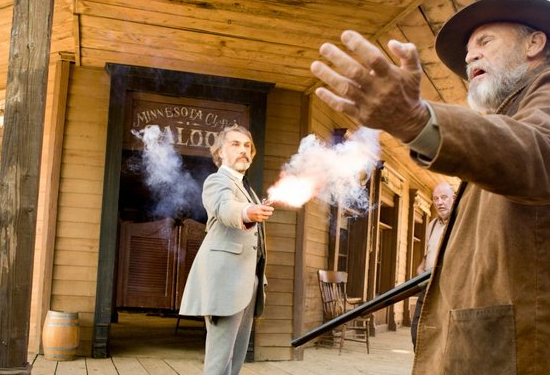 I don't intend to branch out into movie reviews, but Django Unchained struck me as a pretty politically important film, so I wanted to say a few words about it.

I loved the movie. Not for the cartoonish violence (which was OK, nothing special) or for Tarantino's trademark witty banter (which was a bit subdued). I loved Django for the politics.

First of all, I'm pretty sure that for all its elements of blaxploitation, Django's politics are all about white people. It's not a black revenge fantasy; it's a white revenge fantasy.

Anyone who grew up in the American South, as I did, knows how equivocal the region still feels toward its past. My history teachers went to great pains to emphasize that the Civil War wasn't fought over slavery, but because the North wanted to protect its economic interests (this is silly, by the way; of course it was about slavery, the Confederates themselves said it, and everyone knows it). The "positive" impacts of slavery were mentioned - slaves were well-cared-for, many slavers had close relationships with their slaves, and yada yada. The fact that slavery was "more acceptable" in the world of the 1800s is always mentioned.

Having been defeated in battle, nationalistic Southern whites made denial of their past atrocities a central pillar of their group pride - much the same way that Japanese right-wing nationalists defend Imperial Japan's occupation of Korea and brutalization of China, or Turkey denies the Armenian Genocide of Ottoman times.

In recent decades, though, as non-Southern America has become more racially diverse, some have come to see the South as sort of the standard-bearer for Real White America. From New York to California, many people who value their white racial identity also identify with the South. George Packer describes this process well:


[From the 70s onward], the Southern way of life began to be embraced around the country until, in a sense, it came to stand for the “real America”: country music and Lynyrd Skynyrd, barbecue and nascar, political conservatism, God and guns, the code of masculinity, militarization, hostility to unions, and suspicion of government authority, especially in Washington, D.C. (despite its largesse). In 1978, the Dallas Cowboys laid claim to the title of “America’s team”—something the San Francisco 49ers never would have attempted. In Palo Alto, of all places, the cool way to express rebellion in your high-school yearbook was with a Confederate flag. That same year, the tax revolt began, in California.

Racial homogeneity (ignoring those pesky Southern blacks, of course) is one of the South's selling points. The other is its fabled military prowess. Southerners are supposed to make the best soldiers. This is certainly the South's traditional image of itself; the aforementioned history teachers wasted no time in describing all the battles that Robert E. Lee and Stonewall Jackson won before the North ground them down under the weight of superior numbers and superior industry. The idea of Southern men as a "warrior race" even gave birth to the "Southern race" mythology, in which some Southerners contended that they were descended from the chivalrous Norman warriors of old England, while the Northern whites were descended from cowardly, wimpy, Saxon shopkeepers.

But there is another white racial mythology, with even more power than the old Southern supremacy. This is pan-Nordicism, or the idea of the Germans/Nordics/Anglo-Saxons as the Real White People, which grew popular only in the late 1800s and remains fresher in our collective unconscious. If the Southerners are supposed to be good soldiers, even more martial are the fabled Prussians.

Which brings us to Django Unchained.

As some critics of the film have pointed out, the protagonist for the first two-thirds of the film is not Django himself, but his German mentor and benefactor, King Schultz:


This film follows a brave, cunning and fearless lead character whose name starts with a "D." Viewers of the film's trailer would think that character is Django, played by Jamie Foxx. In fact, his name is Dr. King Schultz, a German portrayed by Christoph Waltz, (spoiler alert) who sacrifices his life in the pursuit of freedom and justice for the black man. It is the white Dr. King, who after sharing a motivational tale about a man reaching a mountaintop, nobly gives his life for "black justice."

Schultz' attitude toward slavery is one of barely concealed disgust. He doesn't shoot slavers in cold blood, but obviously enjoys killing them when he has an excuse to do so. He dismisses slavery itself as "malarkey," waving his hand as if hundreds of years of history and atrocity were a passing annoyance. This is bound to annoy many black people, whose history is the one being trivialized. But Django is not a movie about black people, it is a movie about white people.

King Schultz, you see, is a German. Whatever claim Southerners have to be the Real White People, Schultz' claim is deeper and more credible. He's got Siegfried and Brunhilde. And slavery - the institution on which the South built its civilization - is beneath him. He is contemptuous of it and the degenerate human beings who practice it. He does not view slavery as "normal" for the 1800s. He does not shed a tear when he guns slavers down.

And gun them down he does - in droves. The supposedly mighty Southern warriors are no match for Schultz's superior Prussian gunnery. I see this as Tarantino giving a big fat middle finger to Southern pretensions of military manhood; one diminutive middle-aged German dude makes them look like amateurs. King Schultz, you see, is the Real Real White Guy, and one such man is worth a thousand of the slavers who tried to usurp the mantle of the white race.

It almost seems as if Schultz' character came to the South just to serve this notice.

And here's the amazing part; it really, really worked. The theater where I saw Django was packed mostly with working-class-type white folks, more men than women. Exactly the kind of people who might have felt an affinity with the South in the last three decades. And every time Schultz gunned down another white Southern slaver, these people laughed and whooped and cheered. No moral equivalence was in evidence. There was no dismay at the easy defeat of Southern manhood.

Think about that. With a bit of cartoonish violence, Quentin Tarantino was able to do what a thousand reasonable op-eds and preachy biopics have been unable to do: reverse working-class white people's affinity for the South. I see Django as a white revenge fantasy - whites, whose ancestors (like Tarantino's) had no part in the institution of slavery, saying "No. The South does not get to represent my racial group. If I was alive in the 1800s, I would have shot those assholes right in the head!"

Which, if you think about it, is probably exactly what they would have done. After all, the North did fight a very bloody war to end slavery, and many people in the North - for example, Ralph Waldo Emerson, and the folks who wrote "Battle Hymn of the Republic" - were quite clear that they thought violence was a perfectly legitimate way to cleanse the stain on their civilization. And German immigrants to the South in fact often bucked the local power structure and fought for the Union.

For almost forty years now, Americans have had to live with the creeping Southernization of our culture. The Confederate flags on the pickup trucks right next to the American flags. The pundits gushing about the folksy charm of Southern good-ole-boys like George W. Bush. The trumpeting of the South's superior economic model. The ambivalent portrayals of Confederate history. The notion that only a Southerner can win the Presidency. The very real domination of Congress by a heavily Southern Republican caucus. Etc. etc.

But in the last few years, a real pushback has begun. Obama's election is obviously part of it, but I think it's much more result than cause. The rest of white America is starting to realize (or to remember) that in many ways, the South don't really represent them that much. I see Django as part of that realization. And for that reason I love the film, despite its historical insensitivity and over-the-top blaxploitation.

Just like Turkey and Japan, the American South is going to have to realize that yes, the South really were the bad guys back in The War. That doesn't mean they have to be the bad guys going forward.
Author: Noah Smith Posted at 10:30 AM