Finance has always been more profitable

Evan Soltas recently turned heads with a claim that the finance sector takes home half of all business profits in the United States. It turns out that this is an overestimate; in fact, the number is somewhere around 30%. But the basic story is correct. Finance, which accounts for only about 8% of GDP, reaps about a third of all profits.

Here's a graph of finance's profit share, from The Big Picture: 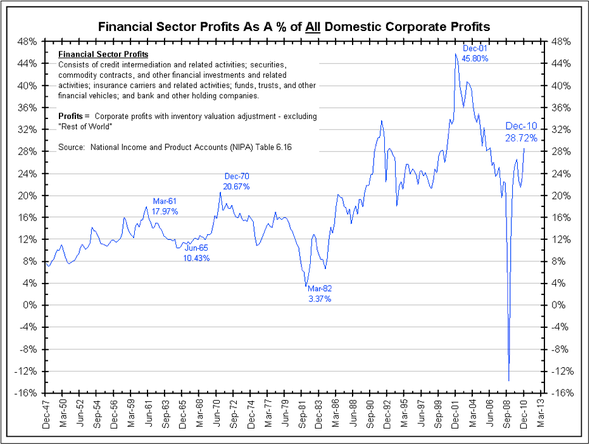 Those numbers are from the NIPA accounts. Here's a more smoothed version of that time series, courtesy of The Baseline Scenario: 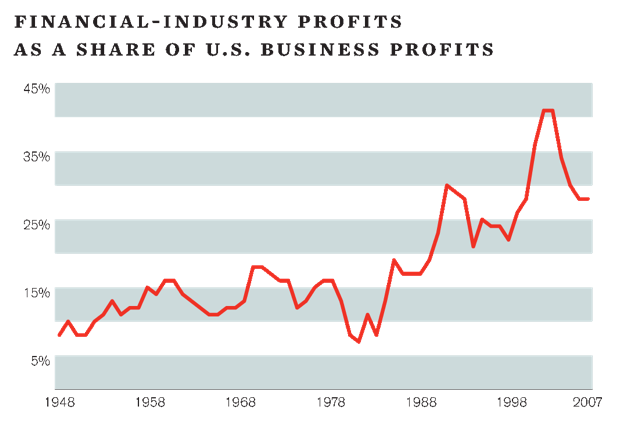 Now here, from Thomas Philippon, is a graph of the finance's GDP share: 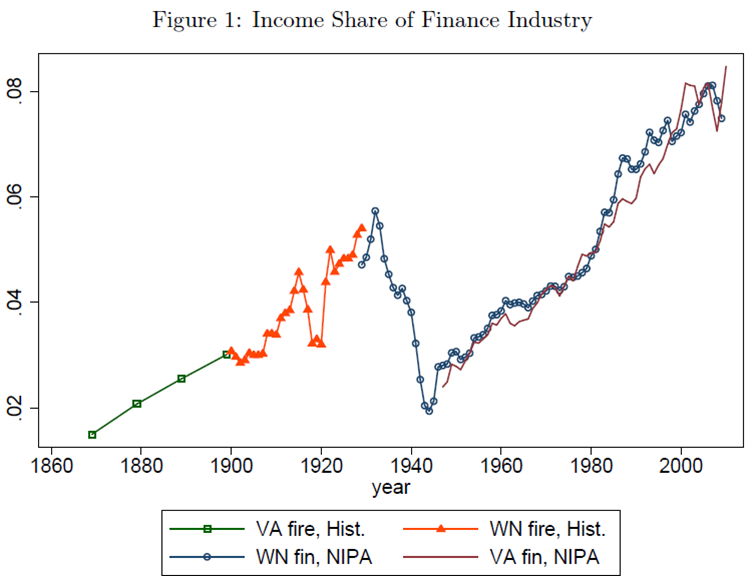 As you can see, finance basically doubled both its GDP share and its profit share since the big deregulation of the early 1980s. And during the finance boom of the 00s, the sector reached truly dizzying heights.

BUT, take a look at those graphs, and you notice something else. Finance hasn't just captured an outsized share of profits since 1980; it has done so all the way back to World War 2.

Now, the question becomes: Why is finance so profitable? One possibility is socialization of risk: in other words, the government implictly guarantees that big banks won't fail, which allows banks to make profit in good times and shift losses onto the taxpayer when things go bad. This is not the same thing as explicit guarantees like the FDIC, which keep lending rates very low and hence squeeze bank profits. It's also not quite the same as Too Big to Fail (though TBTF is part of it); even if all banks were small, the government would bail out the system as a whole if a large enough percentage of the small banks started to fail.

Another possibility is that finance is a natural monopoly. This is weird, since finance has few network effects like Facebook or Google, and doesn't require exclusive local land access like a public utility. But in economics, any industry where economies of scale are large will gain monopoly power, and hence high profits. And banks may benefit a lot from economies of scale.

Why? My intuition says that it's part of the definition of what a bank is. A bank - or any financial institution that acts like a bank, which is most of them - makes its profits by borrowing short and lending long, and this makes it fundamentally vulnerable to a bank run (See the Diamond-Dybvig model for a formal economic model of this).

Now here's the question: All else equal, are bigger banks less vulnerable to runs? A run happens when a critical mass of a bank's creditors demand their money back at the same time. This requires some sort of coordination (which may be provided by a global game, an information cascade, a coordinating signal, some sort of sunspot equilibrium, etc.). The bigger a bank is, the more creditors (depositors, overnight lenders, etc.) it is likely to have. The more creditors a bank has, the harder it may be for a critical percentage of them to coordinate and cause a bank run.

So this might provide financial firms - which almost all act like banks - with significant economies of scale, and hence monopoly profits. But that's just my own conjecture; it may be completely wrong, and even if it's basically right, there may be other important reasons for finance's outsized profit share.

But the point is, finance has always been more profitable than other sectors, even under heavy pre-1980 regulation. This is a puzzle that needs solving.
Author: Noah Smith Posted at 3:45 PM