The Federal Reserve's unprecedented programs of Quantitative Easing have not, as many predicted, resulted in substantially increased inflation. But I view this as a failure of the policy, not a success.

Inflation is grossly underappreciated. Economists consistently fail to educate the public about what they mean by the term "inflation". People think it just means "a rise in the price of something" (though that's not really what it means). And people don't like prices rising, because it seems like it should make stuff more expensive - and who wants that?

We're told that inflation is a necessary cost of improving the economy. And in fact, that's exactly what monetarist macroeconomists (think of Mike Woodford, Miles Kimball, etc.) tell us that it is. We must accept higher inflation, they tell us, in order to also get better GDP growth. But given our 'druthers, they tell us, we'd rather have very low inflation. No one wants to become like Zimbabwe, or the Weimar Republic, right??

I'm not so sure this is true, and I'll explain why later. But first, let me dispel a couple of popular myths about inflation.

Wrong. Remember, inflation is an increase in the overall price level. But when the price of everything goes up, your wage should rise as well. Why? Because on average, we are all sellers of something. If you work in a tea shop and the price of tea goes up, your wage can be expected to go up as well, and so forth. Remember, every dollar that one person spends becomes the income of another person!

So when prices go up, wages should go up as well. Read this paper. The authors find that "higher prices lead to higher wage growth".

Of course, wages are affected by other things besides inflation - for example, labor's share of total income. So "price inflation" and "wage inflation" aren't exactly the same. But they tend to be similar: 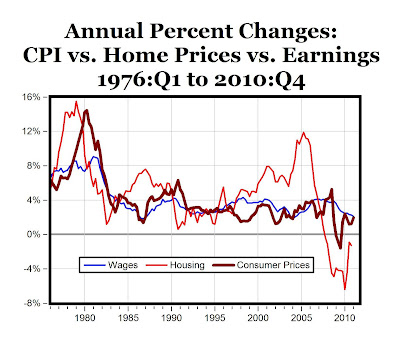 To see that inflation doesn't reduce your real wage, just think about Weimar Germany. Prices went up by a factor of one trillion. But people did not starve en masse as a result. Remember that guy with the wheelbarrow full of cash, going to buy bread? HOW DO YOU THINK HE GOT HIS HANDS ON A WHEELBARROW OF CASH IN THE FIRST PLACE? The answer: That was not his life's savings. He did not sell the family farm. He had a wheelbarrow full of cash because as prices skyrocketed, wages skyrocketed too!

"But don't employers take advantage of inflation to screw over workers and make them take wage cuts?"

But for larger amounts of inflation, no. When inflation gets big, people start noticing, and demanding higher wages. See the paper I linked to earlier for proof. Also, check out historical U.S. inflation: 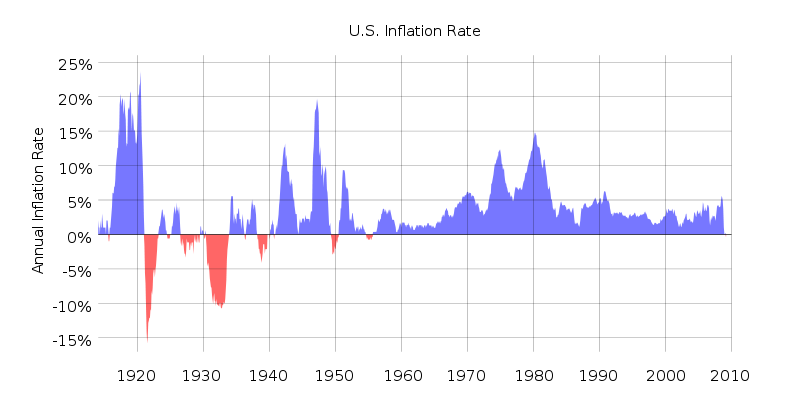 Check out those huge inflation spikes in the 1910s and 1940s! But workers got much richer in those decades.

Anyway, once more: Inflation does not make your real wage fall.

This one is partly right. Surprise inflation punishes past savers, because inflation redistributes wealth from creditors (past savers) to debtors (past borrowers). But in the future, interest rates will adjust to take inflation into account. That's called the Fisher Equation:

So if inflation goes up (and if it's a surprise), future savers will be OK, because they will demand - and get - higher interest rates.


OK, so there are the popular myths. What about the benefits of inflation?


Inflation Benefit 1: Your debt goes away.

Chances are, if you're young and have a mortgage (and maybe some car loans too), you are almost certainly a net borrower. Even if you have some savings, they are probably outweighed by the mortgage. Which means that inflation makes you richer. Remember, surprise inflation helps debtors and hurts creditors. Who are debtors? Mostly the young and the poor. Who are creditors? Mostly the old and the rich.

Now you hopefully see why many conservatives don't like inflation!

All that scary federal government debt! Slows down economic growth, right? Well realize that when there's inflation, the value of the federal government's debt erodes, just like your mortgage! Debt stays the same in $ terms, but nominal GDP goes up, so the debt-to-GDP ratio goes down! That high inflation in the postwar era is exactly how we got rid of our huge World War 2 debt.

And remember that today's government debt is tomorrow's taxes. Inflation therefore reduces the size of your future taxes. Inflation is a future tax cut! Remember, inflation means the value of a U.S. dollar goes down. But the dollar value of the debt does not change. So inflation allows you to pay off your share of the government debt with "funny money"! Awesome, right?

Lots of people believe that the U.S. and other rich countries are experiencing sluggish growth because they are still "deleveraging" - in other words, reducing their total stock of gross debt. Now, that's a controversial theory. But if it's true, it means that inflation would help America deleverage and get back on its feet faster. Essentially, inflation is a partial debt jubilee.


Now, I have to be fair, so I should mention that of course inflation has its costs as well. One of these is the pure nuisance cost - constantly changing prices is a nuisance, and that nuisance can become extremely economically damaging in a hyperinflation. Second, high inflation leads to variable inflation, increasing uncertainty and depressing investment. And finally there might even be government moral hazard; if the government decides it can simply inflate away its debt, it might engage in more irresponsible spending. These costs are all especially severe for higher levels of inflation.

But anyway I hope, after reading this, that you will be a little more wary of all those warnings about the evils of inflation. stop listening to poorly informed politicians, "Austrian" forum trolls, and your uncle who thinks he's still in the 70s. Inflation does not rob the poor man of his hard-earned wages; in fact, it is more likely to unburden the poor man from his crippling debt. And inflation helps get rid of all that debt, both public and private, that many people believe is clogging up our economic system.

We don't want to let inflation get out of hand. But a higher Fed inflation target for the next decade - say, 4% or 5%, instead of our current 2% - would probably be a good thing for most Americans.


Update: Finance blogger Mish Shedlock responds to this post with quite a bit of spluttering.
Author: Noah Smith Posted at 1:15 PM