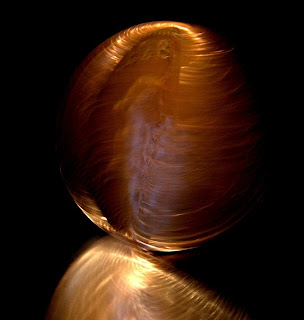 A study in the Journal of Occupational & Environmental Medicine finds evidence linking perceived job insecurity in the Great Recession to poor health outcomes, even among workers who remain employed. The authors, Sarah Burgard, Lucie Kalousova, and Kristin Seefeldt, find that insecure workers--those that believe they are at risk of being laid off--are more likely to report poor self-rated health, symptoms of depression, and anxiety attacks. Sad, but not hugely surprising.

I originally intended to point to this study as yet more evidence of the harmful consequences of prolonged high unemployment. I intended, in particular, to write about how the anxiety and poor health consequences associated with the fear of losing a job must fall especially hard on people with low income. So I set out to gather a bit more data to back up that particular hypothesis, imagining it would be quick and simple task. Not quite.

Most of us are pretty aware of the unemployment rate in the U.S.--7.4% as of July 2013. But for people who do have a job, the more relevant statistic for their financial decision-making (and apparently also for their health) is the probability that they (and members of their household) will keep their job. This statistic is much harder to come by. How aware are workers of their risk of being laid off? How do you quantify job security?

The first place I looked was the Bureau of Labor Statistics, which provides data on layoffs and discharges. The monthly layoff and discharge rate for total nonfarm employment is around 1.3%. It peaked at 2% in early 2009 (see graph below). If we all believed we had a 1 or 2% chance of being laid off, we probably wouldn't be too stressed out about it. But the layoff and discharge rate does not directly translate into an individual worker's probability of losing a job, and it definitely does not translate into a worker's perceived probability of losing a job (the statistic most relevant for their health). 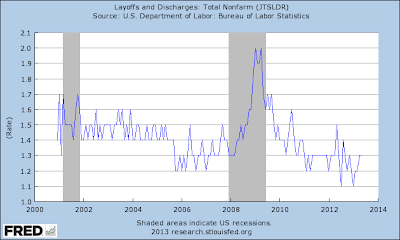 How can we get at people's perceived job insecurity? One way is to ask them. The Michigan Survey of Consumers asks survey participants, "During the next 5 years, what do you think the chances are that you (or your husband/wife) will lose a job that you wanted to keep?"

Prior to answering the question, survey takers are given this brief intro to help them understand probabilities: "Your answers can range from zero to one hundred, where zero means there is absolutely no chance, and one hundred means that it is absolutely certain. For example, when weather forecasters report the chance of rain, a number like 20 percent means 'a small chance', a number around 50 percent means 'a pretty even chance,' and a number like 80 percent means 'a very good chance.'" Nonetheless, most people seem to have tremendous difficulty quantifying their probability of job loss. Over half of people choose 0% or 50% as their response.

Whether or not you will lose your job can be represented by a bernoulli random variable. A bernoulli random variable is summarized by its mean (p). The Principle of Insufficient Reason, or Principle of Indifference, says that "if we are ignorant of the ways an event can occur (and therefore have no reason to believe that one way will occur preferentially compared to another), the event will occur equally likely in any way." This principle was discussed by Bernoulli, Laplace, and Poincare, among others. For a bernoulli variable, this principle says that if we are totally ignorant about its mean, our prior is that the mean is 0.5. This has a corresponding result in information theory: the entropy of a bernoulli distribution is maximized when p=0.5 (think of a 50% chance as being the "most uncertain.") If we have absolutely no information about how likely we are to lose our job, we might just guess that we have a 50% chance of losing it.

Keynes himself summarized the Principle of Indifference in his 1921 Treatise on Probability as follows:


"if there is no known reason for predicating of our subject one rather than another of several alternatives, then relatively to such knowledge the assertions of each of these alternatives have an equal probability" (pg. 52-53).

Keynes was one of many to critique this principle. His views on probability and uncertainty remain controversial, as does the Principle of Insufficient Reason. There is actually quite a large body of literature in statistics concerning "noninformative priors" that continues to study the fascinating and controversial issue of how to represent ignorance. There are also subfields of behavioral economics that study how people treat probability, particularly when it comes to low-probability events (like job loss, usually).

This post doesn't have a real conclusion, just some open questions. What do people do when they don't know their chances of having a job in the future? Do people "underplan" or "overplan" for the possibility of job loss? Would people be better off in general if they could estimate their probability of job loss more precisely? How would you readers estimate your own probability of losing a job in the next 5 years?
Author: Carola Posted at 11:05 PM