Triangle Man and the libertarians 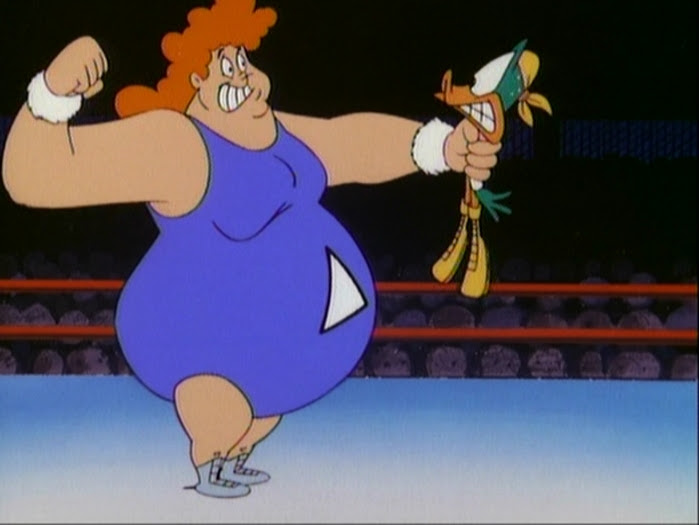 The modern American libertarian movement can be understood by listening to the song "Particle Man", by They Might Be Giants. Here are the lyrics, and here's a video. The song describes the travails of the insignificant Particle Man and the degraded, downtrodden Person Man. In addition to the natural misery of their lowly station in life, these two must cope with the attacks of a bully named Triangle Man, who attacks and defeats both during the course of the song. The only being who could (presumably) save Person and Particle from the depredations of Triangle is the even more powerful Universe Man, who is "usually kind to smaller man". However Universe Man is occupied with lofty pursuits, and cannot be bothered to intercede more often than once per eon.

In modern America, Particle Man and Person Man can be seen to represent normal people, and Triangle Man stands for the various local power figures that bully normal people - shop owners who don't want to admit black people, bosses who put their employees in danger to boost profits, clergy who revile gay people, etc. Universe Man is the biggest power figure of all - the U.S. government, who has a monopoly on the legal use of violence.

The idea of the "progressive" movement, in a nutshell, has been to use democracy to call in Universe Man to restrain Triangle Man. The "libertarian" movement, which arose in opposition to the progressive movement, is mostly about restraining Universe Man from doing this, in order for Triangle Man to retain his local bullying power. I laid out this theory in a blog post about a year and a half ago, but unfortunately failed to reference They Might Be Giants.

The idea of libertarianism as a defender of local bullies can be seen in this article by libertarian political consultant Stephen P. Gordon (no relation to Stephen Gordon of Worthwhile Canadian Initiative), and in the articles he cites by Tim Carney and other libertarians. The article is called "Same-Sex Marriage, Religious Liberty and Extremism From Both Sides of the Aisle". In it, Gordon frets about the possibility that the religious figures whose religion forbids homosexuality might be "forced to perform a same-sex marriage ceremony". He worries that pro-gay extremists might bring about such an illiberal outcome. Gordon sums up his position with this quote:


“Homosexuals have the same rights as everyone else. Just as other libertarians have said, your rights do not change based on your sexual preference. Correspondingly, you also do not get special rights because you are homosexual. An individual or government cannot, for instance, force a minister to perform a wedding ceremony against his will.”

The first question about this article should be: What does it mean for a clergyman to be "forced to perform a same-sex marriage ceremony"? Does this mean that the U.S. government would enact a law saying that if clergymen did not perform a gay marriage ceremony, they would be punished, fined, thrown in jail, or otherwise violently coerced into performing the ceremony?

If so, then the article is pure unadulterated nonsense, because no one, no one at all, is contemplating such a law. The most extreme pro-gay activist on the planet would be unlikely to want to throw someone in jail for refusing to perform a gay marriage ceremony.

So since I am giving Gordon the benefit of the doubt, I am assuming he means something else when he says "forced". Perhaps he means that state or local governments might revoke the official marriage-licensing power of clergy who refused to perform gay marriages? That seems like a possible step.

But would that constitute "forcing" clergy to perform gay marriage ceremonies? Only under a very odd and unusual definition of the word "forced". After all, suppose a traffic cop refuses to issue speeding tickets to Korean people, and is threatened with being fired unless he agrees to write tickets to people of any race. Is he being "forced" to write tickets to Korean people? The ideal libertarian definition of "force" would seem to say "no", because the cop has the option to go find a new job whose requirements do not go against his principles.

So it seems that here we have a case in which libertarians are bending over backward - i.e., changing their typical definition of "force" - in order to come down on the side of a local bully (anti-gay clergy).

What about the pro-gay "extremists" of which Gordon warns? Here is the example he gives:


One issue is that there are extremists on both sides of the issue. I’ve already picked on Robertson, Perkins and Falwell, but here’s the other side of the coin:


Many Christians attempt to argue that, since their opposition to gay marriage is based on religious grounds, allowing gay marriage or prohibiting discrimination against gays is somehow infringing upon their religious liberty.

The short answer to this is: “Tough!”

The long answer is: “Tough shit!”

This same-sex marriage entry went on to indicate that the free expression of religion doesn’t “include hate crimes.”

Anyway, Gordon fails to give even one single example of a pro-gay person advocating forcing clergy to perform gay marriage ceremonies. He quotes a number of anti-gay conservatives who fret about the possibility, but zero evidence that any pro-gay person actually wants to do it. His entire evidence for pro-gay extremism comes in the form of a single use of the word "shit" from a wiki website. And he repeats the anti-gay line that gays are somehow demanding "special rights".

I think this article is a good demonstration of the priorities of libertarianism. It really bends over backwards to warn us about an imagined future government violation of the liberty of a local bully, while utterly ignoring the effects of the bullying itself.

This makes me all the more certain that the libertarian movement engages in a peculiar form of doublespeak, in which "liberty" is used to mean something that most people would regard as the opposite of liberty - namely, the freedom of Triangle Man to beat up Particle Man and Person Man. That seems very similar to the phrase "freedom is slavery", from the book 1984.

So after I read Gordon's article, I tweeted: "Opposing gay marriage to protect "religious liberty" is just one more way "libertarians" redefine slavery as freedom."

Gordon was very angry at this, and replied: "That's an outright blatant lie. Read the article; I/we totally support gay marriage - as well as other individual rights."

I will let the reader decide whether or not my statement was "an outright blatant lie".


Update: Gordon responds, in a considerably less angry fashion. I find his response quite reasonable in most regards, though I think it still evinces too much reflexive suspicion of "the far Left".
Author: Noah Smith Posted at 12:19 PM