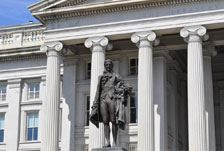 In 1997, the U.S. Treasury made the contentious decision to begin issuing Treasury inflation-protected securities (TIPS). Treasury Secretary Robert Rubin proposed the issuance of these inflation-linked securities as a way to reduce the government's borrowing costs and increase the national saving rate, remarking:


"Helping the economy and raising incomes requires increasing productivity, and the saving rate is central to that objective. The initiative we are announcing today has the potential of raising our national saving rate as well as reducing the cost of capital to the federal government. Today we are announcing our intention to issue securities that will offer investors protection against inflation. Americans' retirement savings in their pension plans or their own IRAs can have inflation protection, which can help ensure their retirement security...

We believe these bonds will offer savers value-added in the form of protection against inflation, plus a real rate of return backed by the full faith and credit of the United States, and in return for offering that value-added, over time the cost of financing to the federal government will be lower than it otherwise would be...This is a common sense approach to government and an excellent example of government reinvention -- protecting Americans from inflation with an innovative investment method, and saving them money as taxpayers by holding down borrowing costs."

In July 2008, however, advisers to Treasury Secretary Henry Paulson recommended that Paulson should eliminate five-year TIPS and reduce the use of TIPS of other maturities, arguing that the inflation-indexed securities had cost taxpayers billions. This advice was not put into effect. The question remains: Has the Treasury benefited from issuing TIPS? I explore the mixed evidence in this post, the second in my series about inflation-indexed debt. The first post in the series, "Academic Scribblers and the History of Inflation-Protected Securities," describes  the origins and re-origins of inflation-linked government debt, which briefly appeared in 1780 and then disappeared for two centuries.

In short, the inflation risk premium does not depend directly on how uncertain or volatile inflation is. What matters for the inflation risk premium is how future inflation covaries with future consumption (alternatively, with the stock market), and that is not obvious. In 1996, Campbell and Shiller estimated the premium by several different methods and came up with an estimate of 50 to 100 basis points for a five-year zero-coupon nominal bond: in short, non-trivial savings for the government. These anticipated savings were part of the reason why the Treasury began issuing TIPS.

Why then, in 2008, did the Treasury Borrowing Advisory Committee recommend that TIPS should play a smaller role in meeting future financing needs? A member of the committee "estimates that the cumulative cost of the TIPs program to the Treasury since inception, when comparing the total expense relative to nominal bonds issued at a similar time, approaches $30 billion with the bulk of that cost a direct result of significantly higher inflation than estimated by the markets 'breakeven' level when issued." They attribute part of the cost to a liquidity cost, since TIPS are less liquid than nominals so investors must be compensated for the lower liquidity. They point out that the first factor--higher realized inflation than breakeven inflation--needn't necessarily continue. I would also point out that TIPS could gain liquidity over time as the TIPS market develops further, but the Committee's recommendation would very likely have reduced TIPS' liquidity.

An academic study in 2010 supports the view of the Treasury Borrowing Advisory Committee. In "Why Does the Treasury Issue Tips? The Tips–Treasury Bond Puzzle,"  Matthias Fleckenstein, Francis Longstaff, and Hanno Lustig estimate that "On average, the U.S. government has to levy $2.92 more in taxes, in present discounted value, to repay $100 of debt issued if the debt is indexed rather than nominal." They add that, in issuing TIPS, the government gives up a valuable fiscal hedging option. Fleckenstein et al. say that "To the best of our knowledge, the relative mispricing of TIPS and Treasury bonds represents the largest arbitrage ever documented in the ﬁnancial economics literature."

Jens Christensen and James Gillan (2011), in contrast, say that the Treasury has benefited overall from using TIPS. There are two main premiums to consider: the inflation uncertainty premium and the liquidity premium. The former can help the government lower its borrowing costs by using TIPS, and while the latter can raise its borrowing costs. Both premiums can vary over time. Christensen and Gillan attempt to quantify the size of each premium and construct a liquidity-adjusted inflation risk premium. They come up with a range of estimates, and the most conservative is plotted below. The fact that it is, on average, positive (and less conservative estimates more obviously positive) supports Treasury's continued use of TIPS. I find their results fairly convincing, particularly in light of another study
Another study, by William C. Dudley, Jennifer Roush, and Michelle Steinberg Ezer (2009) also comes out in support of TIPS as a cost-effective form of government financing. Their estimates of the inflation risk premium by maturity of issue are in the table below. They find that the liquidity compensation was around 200 basis points in 1999 but has since fallen drastically to well below 50 basis points. The positive risk premium and low liquidity compensation in combination imply cost savings for the Treasury.
In my interpretation, the balance of evidence supports the idea that TIPS are mildly cost-effective, or at least not cost-increasing, for the Treasury. The government's borrowing cost is not the only factor to consider when evaluating the net effect of TIPS. Rubin, remember, suggested that TIPS would increase the nation's saving rate and in turn increase productivity. John Campbell and Robert Shiller listed other potential upsides and downsides to TIPS in their 1996 "A Scorecard for Indexed Government Debt." I'll discuss some of these other issues in future posts.

**Disclaimer: This post not intended as investment advice.
Author: Carola Posted at 8:40 PM