What Can the Stock Market Tell Us About War With Syria? 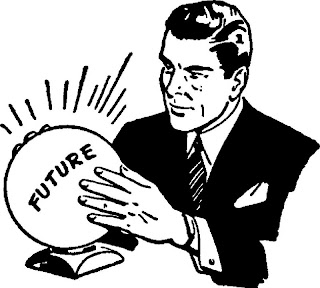 One of the books in my every-expanding to-read pile is Barton Biggs' Wealth, War and Wisdom. Biggs was a Morgan Stanley director, Hedge fund honcho (and later day survivalist) and the book (as I understand it) argues that stock markets correctly anticipated the course of WWII.

The basic idea is as follows: the price of a given company's stock is a sort of collective prediction about the future profitability of that company. If the price of that stock responses to some new event by going up, that suggests that the event increases the likely profitability of the company. If it goes down, that suggests that the company is likely to be less profitable (or is less likely to be profitable). Likewise, if a stock index goes up or down, this suggests something about the aggregate profitability of the companies that make up the index, and if the index is sufficiently broad based, we might even be able to infer something about the effect of the event on the overall economy.

This sort of reasoning has it's critics, and it isn't perfect by any means. For one thing, it is possible for the collective judgment of the market to be wrong (even a fierce advocate of the Efficient Market Hypothesis would concede as much). And there is always a risk that one might misinterpret a given market movement. Still, even if the market isn't perfect, it probably has a sounder basis than the source of a lot of punditry, which is just making stuff up.

This week the Congress is debating an Authorization for the Use of Military Source in Syria. As with any great matter of war and peace, there are a lot of unknowns. Will military strikes deter Assad from using chemical weapons again? Could it destabilize the region? Etc. Personally I think military strikes are a bad idea. But that's just my opinion. What, if anything, does the Great and Powerful Stock Market think of it?

Looking at the Dow and S&P 500for the last month, it seems that, at first, the stock market did not treat Assad's chemical weapons attack as a big deal. Shortly after 3:00 pm on August 26th, however, both the Dow and S&P fell sharply, as Secretary of State John Kerry gave an afternoon press conference in which he called the Syrian attacks a "moral obscenity" and intimated that the U.S. would take military action against the regime.

Over the subsequent week both Dow and S&P edged back upward as domestic opposition to military strikes led Obama to seek Congressional authorization (which, it increasingly looks as if he will not get). Then, on Monday, an off the cuff statement by Secretary Kerry that Syria could avoid reprisals if it allowed international control of its chemical weapons appears to be turning into an actual realistic option for avoiding war. Coincidentally or not, the Dow rose around 140 points.

You see the same general trend (albeit inverted), by looking at oil prices. When military strikes appear more likely, the price of oil goes up; when their probability falls, the price falls as well. Syria isn't a big source of oil, of course, but they are backed by Iran, and the price movements suggest that military strikes could have larger consequences. I was a bit of a jerk to Matt Yglesias when he mentioned this last week, but his methodological point is sound. Higher oil prices hurt the U.S. economy, and so to the extent that military action against Syria would lead to higher oil prices, that is at least one reason against military action.

UPDATE: Asian markets appear to be reacting positively to President Obama's announcement that he is delaying a vote on the Syria AUMF.
Author: Josiah Neeley Posted at 3:00 AM