Nobel Laureate Eugene Fama made waves in the past few days when he called QE a "neutral event". Fama argued that because QE was just the exchange of one kind of interest bearing asset (money that collects IOER) for another (long term treasuries and agency MBS), the policy could have no effect. In my view, his comments were mistaken because they focused on microeconomic intuition and thus ignored the macroeconomic effects of monetary policy.

Fama's main argument was that monetary policy changed character at the zero lower bound. Starting in 2008, the Federal Reserve started paying interest on excess reserves. Once the Fed started to pay IOER, excess reserves held by banks became interest bearing assets. As a result, now when the Fed conducts QE, all it is really doing is taking the private sector's long term bonds and assets and exchanging them for short term (interest bearing) cash. So no new currency makes it into the economy, and as such QE can have no effect.

The set up is correct, but not the conclusion. By ignoring the role of expectations at the zero lower bound, Fama glosses over the real reason why QE matters. Scott Sumner explained this a few weeks ago:

In short, QE is effective because it changes expectations about the future monetary base. Since QE signals an increase in the monetary base in this period and all future periods, it raises expectations about future nominal income and therefore boosts the economy now. Since the short term rate will not be below the interest paid on reserves forever, then the injection of currency has a positive effect on the future price level. This is not a story of wealth effects from appreciating financial assets or a reach for yield due to lower average bond duration. It's not a story of people borrowing as the result of lower interest rates. It's just a simple tale of price expectations and forward looking monetary policy.

But this misses the underlying macro context. Because the purchase of assets represents a signal about a desired monetary outcome, the result of this "asset swap" is not as neutral as Fama would believe. Moreover, because the Fed has made a commitment to keeping the Fed Funds rate low for an extended period of time, the short rate will not rise. Instead, by expanding the money supply, the Fed keeps short rate low.

Now, if I were a single market participant, the situation would be different. If I individually decided to sell short term debt to buy long term debt, then with sufficiently large quantities I could raise the short term rate and lower the long term rate. But since the Fed controls the printing presses and has the power to pin down the short term rate, this logic does not apply. Instead, if rates did rise, the Fed could just purchase more T-Bills. Even though QE introduces more short term assets into the system, it does not raise the short end of the yield curve.

Furthermore, Fed's purchases of long term treasuries are supposed to raise long rates, not lower them. Since the the long term rate goes up with higher NGDP expectations, then Fed purchases of long term bonds should raise long term rates. And as Michael Darda has repeatedly shown, rates rose during every period of QE. This is just another example of how microeconomic intuition can fail catastrophically in the world of macro. Because Fed purchases have macro level effects on inflation and economic growth, the Fed can actually buy more of an asset and have the price of it go down. 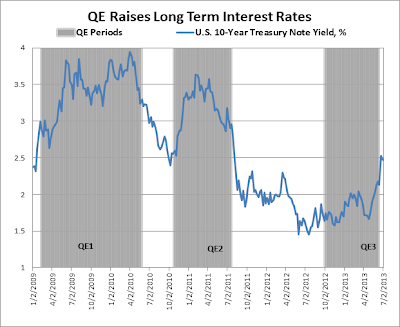 Thinking in these terms will make sure you don't forget about the macroeconomic side of monetary policy. If Fama had said, "IOER means the Fed's printing of money to buy long term bonds has no effect on long term rates and actually raises short term rates", it would have been immediately clear something was off. Why would printing money have an effect on short term rates given that new mass of money can be used to buy T-Bills? Money immediately evokes macro intuition, whereas interest rates focus on micro intuition. As such, focusing on money allows you to guard against simple mistakes.

Thinking in terms of money also makes sure you don't mix causality. Ronald McKinnon argued in a recent WSJ opinion piece that the Fed should raise interest rates will stimulate banks to start lending. If you translate his statement about interest rates into money, it would read "contract the money supply so banks start lending". The first statement appeals to microeconomics, and seems sensible. But even a little thought about the second statement in terms of money immediately reveals the mistake. To stimulate lending, rates will need to fall as the money supply expands. But over time, when interest rates rise, it will be because of the monetary expansion boosting inflation.

Monetary theory is peculiar because it contradicts a lot of basic microeconomic and intuitions. As such, you often see very smart people (Nobel prize winners included) make smart-sounding arguments that are ultimately false. So for as much as I respect the work Professor Fama has done in the field of empirical finance, I disagree with his description of QE. It's not some neutral event, and to think so distracts from the urgent task of monetary reform.
---
DeLong offers his comments here.