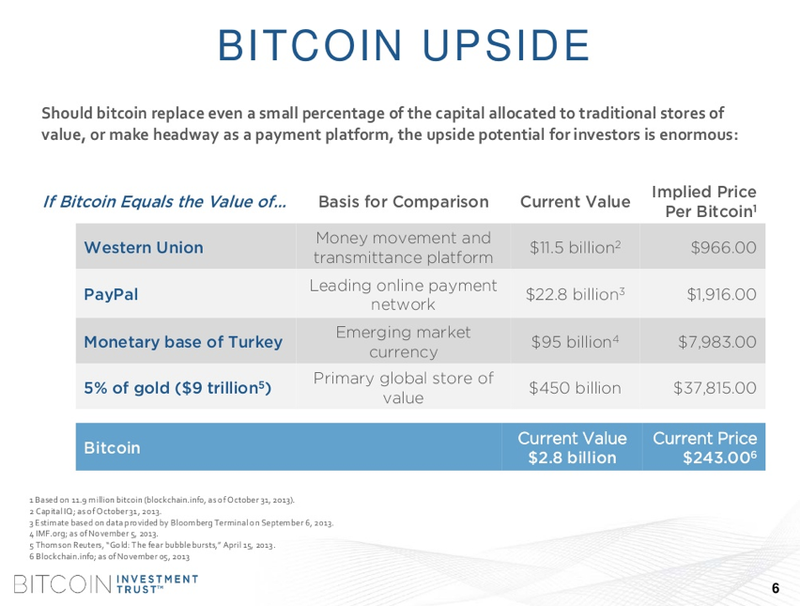 Joe Weisenthal presents this … uhm, interesting slide that tries to impute a price for Bitcoin based on the market value of Western Union and PayPal, as well as the monetary base of Turkey or 5% of gold.

The best arguments for the long-term viability of Bitcoin that I have seen revolve around its usefulness for making payments. If Bitcoin becomes a popular way to make instant payments, rather than as an investments, then the value of Bitcoin will mainly derive from the fact that you need Bitcoin to make Bitcoin payments.

Western Union processed $71 billion in transactions in 2012.* If you assume that each bitcoin can, in practice, be used once per day for payments (allowing some for “investment” purposes and the need to keep some around in case you need to make payments), you need only $195 million in Bitcoin to make payments. So a bitcoin would only be worth about $16 to be as big as Western Union.

The key assumption here is probably the velocity of circulation of Bitcoin. Perhaps a commenter who makes frequent Bitcoin payments can give us a better estimate. You could imagine a scenario where payment consumers hardly need to keep any bitcoins around, so each bitcoin can turn over dozens of times a day.

* It is probably more in 2013, but then again there are probably more than 11.9 million bitcoins around today.
Author: Anonymous Posted at 12:30 PM