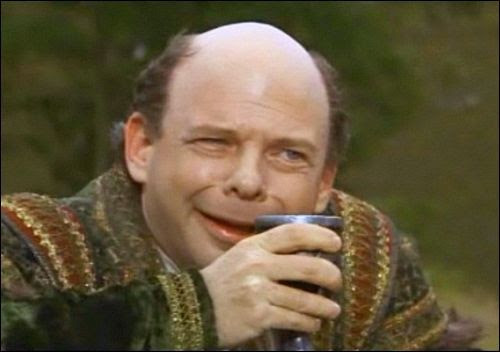 I see that Robert Murphy of the Mises Institute has taken the time to pen a thoughtful critique of my gentle admonishment of followers of the school of quasi-economic thought commonly known as "Austrianism." Robert deserves a response, so here is one.

First, Robert takes pains to point out that the image I included in my original blog post was not a picture of an Enterprise crewmember who had been subverted by Khan's "brain worms" (actually "Ceti eels"), but rather of a minor character in an unrelated episode of the original Star Trek series. This is correct, of course. Searching for an image to use in my post, I found the pictures of the actual Ceti eels too visually unappealing, while the pictures of the subverted Enterprise crewmen did not look particularly out of the ordinary (much as a devotee of Austrianism may appear, when encountered in a bar or on a trading floor, to be a normal human being in full possession of his faculties). So I instead chose an unrelated picture that I thought would better convey the general idea of the post, rather than remaining faithful to the canon of the original Star Trek series. Robert might also have noted that the picture used by Bloomberg was not of a Ceti eel, but of a handful of garden-variety earthworms. I apologize for this canonical inaccuracy as well. And before anyone starts giving me a hard time, let me note that the image at the top of this post is actually not a picture of Robert Murphy; it's actually an image of the alien "Balok" from the original Star Trek series episode "The Corbomite Maneuver."

So now that that's cleared up, let's examine Robert's critique. Much of my original article discussed the failed Austrian prediction that QE would cause inflation (i.e., a rise in the general level of consumer prices). Robert reiterates four standard Austrian defenses:

3. "Inflation" doesn't mean "a rise in the general level of consumer prices," it means "an increase in the monetary base", so QE is inflation by definition.

4. Austrians do not depend on evidence to refute their theories; the theories are deduced from pure logic.


This is sort of an intellectual defense-in-depth. Each argument, if true, obviates the need for all the former arguments. For example, if asset price rises really are the same as consumer price rises, who cares if consumer prices rose more than the official statistics suggest? And if QE really is defined as inflation, why does one need to point out rises in asset or consumer prices? And if Austrian theory is not vulnerable to falsification by data, then why bother citing any evidence at all?

In other words, the fact that Robert is making all of these arguments at once seems to me like a tacit admission that each one of the arguments, on its own, is very shaky.

But be that as it may, all of the arguments are either unsupported assertions or deeply flawed. Let's go through the list.


2) "prices are rising much faster than anyone thinks" There are plenty of people who think the “cost of living” is a lot higher now than it was in 2007. No, I’m not saying we’re living amidst hyperinflation but the government is hiding it; but I do think the official Consumer Price Index is understating things.

Rebuttal: There are plenty of people who think the "cost of living" is a lot lower than it was in 2007. No, I'm not saying we live amidst deflation but the government is hiding it; but I do think the official Consumer Price Index is overstating things.

See what I did there?


UCLA giants Alchian and Klein argued in a 1973 paper that asset prices should be included in a proper measurement of monetary policy. By that criterion, the Fed definitely has been “loose” and “inflationary” since 2008; indeed that was the whole point. People look at soaring stock prices and say, “Good job Bernanke!”

Rebuttal: Imagine yourself saying this: "Oh, no, the price of stocks is going up! Jeez, how will I be able to afford my weekly purchase of 100 shares of my favorite ETF? I better ask my boss for a raise!" You can't, right? Because when stocks go up, that's good.

Now an Austrian may be tempted to retort: "But this price rise is only temporary; it's going to crash later!"

OK, even if that were the case, it would be the crash, not the rise in stock prices, that would be the bad thing. Whereas if you're worried about increases in the price of say, TVs, your chief worry is not that the price of TVs will subsequently crash - in fact, you probably hope that it does, so you can get a cheap TV.

So you see, stock price rises are not actually good to include in inflation. (Homes are more complicated, of course, since they involve a consumption component.)


Noah [argues] that the Austrians in response to the modest CPI hikes of 2009-2013 attempted to redefine inflation. No, Noah, this is not some new position. Here’s Mises on page 420 of Human Action:

...What many people today call inflation or deflation is no longer the great increase or decrease in the supply of money, but its inexorable consequences, the general tendency toward a rise or a fall in commodity prices and wage rates...

Now that was originally published in 1949, so I’m pretty sure Mises wasn’t providing cover for Peter Schiff and me in light of CPI after various rounds of QE.

If Noah doesn’t trust such a dodgy source as Mises, maybe he’ll heed the statements of an official Federal Reserve publication? Joe Fetz provided me with this 1997 Cleveland Fed paper, which says:

Today, we commonly hear about different kinds of inflation. Indeed, the word inflation is often used synonymously with “price increase.” But there is also a different, more specific, definition of inflation–a rise in the general price level caused by an imbalance between the quantity of money and trade needs. This “inflation” has but one origin–the central bank. It is the latter definition that drives many of those advocating an anti-inflationary policy for the Federal Reserve, and that more closely conforms with the word’s original meaning.

Oops, sorry Noah. Maybe next time you should do some research before writing on a topic.

Historically the word “inflation” did indeed mean what (some) Austrians currently insist is a better definition–namely an increase in money rather than an increase in prices[.]

Let me humbly suggest that perhaps Robert should actually read his own sources before writing on a topic.

But in any case, yes, it is true that Ludwig von Mises also wanted to define "inflation" as an increase in the monetary base (note, however, that the rise in prices that he considered to be an "inexorable" result is looking less inexorable by the day). But so what?

Here's the real point: Defining QE as inflation, no matter who came up with the idea and when, is merely a distraction from the fact that QE has not led to a rise in consumer prices. What kind of prediction is it to say that "QE is inflation, therefore of course QE causes inflation, HA!" No prediction at all.

But this brings us to Austrian Defense #4...


But Noah’s claim that my prediction about CPI movements has something to do with Austrian theory is nuts. Notice that the mainstream economists like to mock Austrians (Misesians in particular) on two different counts: In the first place, they mock us because we adhere to “praxeology,” which says that pure economic theory is deduced a priori, rather than through empirical observation. (Here’s Noah admitting he knows this, in point #2 of a February blog post.)

This is basically saying "Noah, you can't use evidence to disprove our theories, because you know very well we don't care about evidence!"

Which is sort of the whole problem, isn't it? Austrians are looking at real events and saying "Inconceivable!"...er, make that "Inexorable!" But I do not think that word means what they think it means.

See, most people do care about the evidence, very much. They do not care if Austrian theories were logically deduced from the Human Action Axiom. They care whether their financial portfolios increase or decrease in value. And if they bet on the Austrian predictions that inflation (the real kind) would go up as a result of QE, they lost money. Praxeology might be logically satisfying, or it might not, but it's cold comfort when extant reality is kicking you in the head.

My article was not intended to point out that Austrian theory failed its own test of validity following QE. It can't possibly fail its own test - it designed the test so that it could not fail it.

My point was that Austrian theory has failed other people's test of validity.

Now, that's obviously not enough to convince a lot of Austrians to abandon Austrianism - once you have accepted a belief system that creates its own criteria for success, you're very unlikely to change (that's what I meant by calling Austrianism a "brain worm"; it is by no means unique in having this Ceti eel-like property). But from where I'm standing, failed empirical predictions are a big deal. And it's not just inflation, either - it's gold, the dollar, etc.


Anyway, there are some other miscellaneous points I could make about Robert's critique (For example, he blatantly overlooked the one point at which my rant was actually charitable to Austrian ideas! Can you find it?). But this is the main thrust. In any case, I thank Robert again for taking the time to write a response to my article.
Author: Noah Smith Posted at 2:35 AM