Are libertarians ready to embrace a broader notion of freedom? 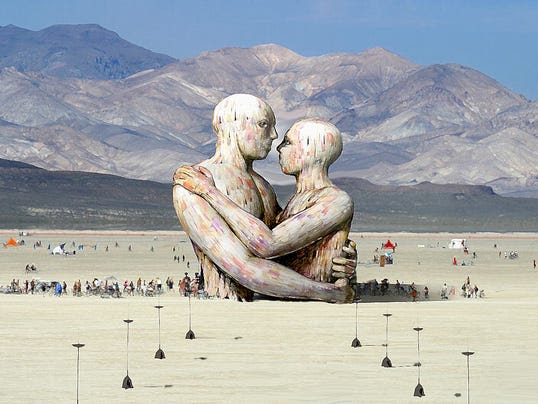 
The way we define “east” and “west” doesn’t allow us to declare one spot of land the westernmost point on the globe. But if “west” is defined more emotionally as the idea of American freedom, then the Burning Man festival might be the uttermost west. If you don’t already know what Burning Man is, you shouldn’t rely on me to explain it to you -- just read the introduction on the website, use Google Images, or read the first few chapters of Cory Doctorow’s book "Homeland.''
This year, the media is abuzz with the news that Burning Man will be getting a very special guest: Grover Norquist, president of Americans for Tax Reform. At first this might seem a bit incongruous, since conservative activists don’t seem like the type who enjoy nudism, drugs, crazy art or a “giving economy.” Also, Norquist campaigned for George W. Bush, who is about as close to the antithesis of Burning Man as any American I can think of. But Norquist explains his mission thus:

There's no government that organizes this….That's what happens when nobody tells you what to do. You just figure it out. So Burning Man is a refutation of the argument that the state has a place in nature.
This is a fun, exciting, cheerful collection of people being free of state control and doing stuff they want to do…. If somebody wants to sit in a corner and read Hayek, I think that that's allowed. If people want to run around with not as much clothes as they normally do, I think that's allowed as well.

Actually, as conservatives go, Norquist has always had a maverick streak -- he has advocated tax breaks for marijuana growers and called for shorter prison sentences. But he has spent the bulk of his career fighting for one thing -- lower taxes. In fact, in this respect, Norquist is emblematic of the entire modern American libertarian movement -- in principle, advocating a broad range of freedoms, but in practice focusing almost entirely on freedom from taxation and regulation.
This is a shame. There are many more kinds of freedom than the narrow set embraced by the modern libertarian movement. Burning Man is a showcase for those freedoms, which is why I am so happy that Norquist is going. In fact, I hope his odyssey can be a symbol of a larger shift in the focus of the libertarian movement.
Economic freedom is certainly an important thing, and we tend to take it for granted. Anyone who has lived under a regime of stifling regulation knows how infuriating it can be. When taxes used to fall more on the middle and lower-middle classes than now, that must also have seemed like a crushing burden. And who wants to have to get a license just to do his or her job? In general, an interventionist state strangles the small businesses that provide both economic lifeblood and social independence for much of any country’s middle class.
But there are other kinds of freedom that matter a lot for the vast majority of people -- people who don’t try to derive their ideologies from axioms, or spend time curled up with a Hayek book. For example, social freedom -- the ability to express your individuality without having people ostracize you -- is hugely important in most people’s lives. Norquist will see this freedom in action at Burning Man.
Nor is the state always a destroyer of human freedom. It’s liberating to be able to hop in a car and drive to another city without stopping to pay a toll every few miles. It’s also liberating to be able to hop on atrain and jaunt across a city without sitting in traffic.
For those freedoms, you need the government to intervene in the economy, and that’s going to involve a tradeoff, because taxpayers are going to have to pay for the freeways and the trains. But that’s just reality -- we’re always facing tradeoffs between different kinds of freedoms. My freedom to walk down the street naked has to be weighed against your freedom to walk down the street without seeing disturbing sights.
Sure, if you make all the right assumptions and mouth all the appropriate axioms, you can avoid having to make hard decisions -- you can just pick one tradeoff and call it “natural rights.” And many libertarians do this. But it feels arbitrary, and this may be one reason that Americans, despite their generally libertarian beliefs, have been reluctant to sign up for the movement.
So I sincerely hope that American libertarianism is experiencing a shift -- a shift away from obsessive focus on the government and economic freedoms and rigid logical systems, and toward a more expansive, intuitive definition of liberty. And to Grover Norquist, let me say: Have a good burn.
Author: Noah Smith Posted at 2:17 PM