RBC models we can believe in? 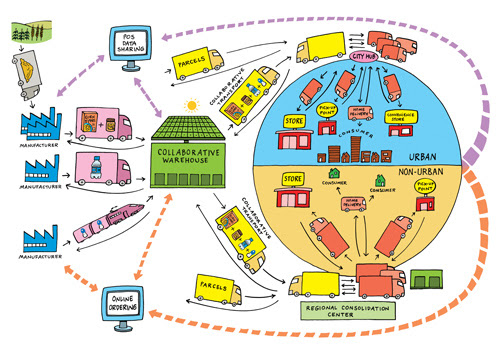 At Bloomberg View, I wrote an article trying to explain the basics of RBC models to the masses, and give a little history-of-thought. Of course anyone who actually knows the situation will realize that my treatment is pretty simplistic, but you try explaining RBC in 800 words to people who know nothing about modern academic macro, in a way that's entertaining and grabs eyeballs. It is harder than it sounds. ;-)

Anyway, the post only talked about the original, historical RBC model, and mentioned a couple follow-ups, such as news shock models. But if you define "RBC" as "any macro models where aggregate uncertainty is mainly driven by productivity shocks," then the field gets a lot wider.

In fact, if you put a gun to my head and asked me why recessions happen, first I'd kiss my ass goodbye, but then I'd say that some of them happen because of sector-specific productivity shocks, amplified by network effects and by some departures from Rational Expectations. Actually, there are a number of models popping up that try to model something like this, and I think it's a hugely interesting literature. Here are a couple examples, with abstracts.

This paper investigates a real-business-cycle economy that features dispersed information about the underlying aggregate productivity shocks, taste shocks, and, potentially, shocks to monopoly power. We show how the dispersion of information can (i) contribute to significant inertia in the response of macroeconomic outcomes to such shocks; (ii) induce a negative short-run response of employment to productivity shocks; (iii) imply that productivity shocks explain only a small fraction of high-frequency fluctuations; (iv) contribute to significant noise in the business cycle; (v) formalize a certain type of demand shocks within an RBC economy; and (vi) generate cyclical variation in observed Solow residuals and labor wedges. Importantly, none of these properties requires significant uncertainty about the underlying fundamentals: they rest on the heterogeneity of information and the strength of trade linkages in the economy, not the level of uncertainty. Finally, none of these properties are symptoms of inefficiency: apart from undoing monopoly distortions or providing the agents with more information, no policy intervention can improve upon the equilibrium allocations.

This paper argues that in the presence of intersectoral input-output linkages, microeconomic idiosyncratic shocks may lead to aggregate fluctuations. In particular, it shows that, as the economy becomes more disaggregated, the rate at which aggregate volatility decays is determined by the structure of the network capturing such linkages. Our main results provide a characterization of this relationship in terms of the importance of different sectors as suppliers to their immediate customers as well as their role as indirect suppliers to chains of downstream sectors. Such higher-order interconnections capture the possibility of “cascade effects” whereby productivity shocks to a sector propagate not only to its immediate downstream customers, but also indirectly to the rest of the economy. Our results highlight that sizable aggregate volatility is obtained from sectoral idiosyncratic shocks only if there exists significant asymmetry in the roles that sectors play as suppliers to others, and that the “sparseness” of the input-output matrix is unrelated to the nature of aggregate fluctuations.

And just for fun, I'm going to throw in "Intermediate Goods, Weak Links, and Superstars: A Theory of Economic Development", by Charles I. Jones (2008), which bills itself as a theory of development, but seems like it could pretty easily be modified to be a business-cycle theory for developed countries.

(Also there's this Gabaix paper, which is about firm-level heterogeneity. I originally included it here, but it doesn't really fit with the others so I took it out. Heterogeneity is a very different story from networks and complexity. Still, good to see heterogeneity getting more attention.)

The basic idea here is actually pretty simple. Angeletos actually said it, when he came to present his paper at Michigan: "One firm's productivity determines other firms' demand." In other words, these network models go way beyond the traditional, typical framework of aggregate supply and aggregate demand. (Other models also do this, but usually across time rather than across firms or sectors.)

Like I said, if you held a gun to my head, I would say that something like this is actually going on in the actual economy. Why? Because aggregate shocks are sometimes really hard to identify. There were the oil price shocks in the 1970s and Volcker's tightening in the early 1980s, but a lot of recessions don't seem to be externally provoked. So maybe that means there is some kind of random mass-psychological sentiment thing going on, or maybe it means that recessions are sunspots caused by the interaction of a whole bunch of frictions, and thus completely unknowable. But this network/linkage idea seems like a promising alternative to those unhappy possibilities. That doesn't mean I think any of these models is right - they're all going to have empirical issues, because they are basically proof-of-concept papers. But I suspect they're on to something that many have expected for a long time - the idea that economic fluctuations are the result of the complexity of economic systems.

But explaining to Bloomberg View readers that these models may or may not deserve the moniker "RBC" would have distracted from my main point, which is to teach people a little about the history of macroeconomic thought (read: academic politics in the macro field), so someday I can explain my theory of why Mike Woodford is the most important macroeconomist in the world. But now I'm getting ahead of myself...
Author: Noah Smith Posted at 6:33 PM