U.S. vs. China+Russia - the Tale of the Tape

About 70 years ago, there was a big battle for supremacy among all of the big countries on Earth, called "World War 2." The countries that came out on top of that battle were the United States, Russia, and China. Following the end of that war, there was a protracted low-intensity power struggle (the Cold War) between those three winners, which Russia lost, and the United States and China - who started out as enemies, but became de facto allies in the 1970s - won.

People in the U.S. seem to tacitly assume that because we won those two big power struggles, we'll win the next one - if there even is one at all.

During the 1990s, this seemed to be predicated on the idea that the U.S. would win the ideological battle - that democracy, capitalism, and human rights were such an attractive and potent combination that everyone would settle on these systems, and then there would be no need for further power struggles among nations. This was the "End of History" idea. It may still work out that way, but it hasn't yet - about 40% of the world has resolutely refused to adopt U.S.-like systems, and democracy has actually been in retreat since slightly after the turn of the millennium, if you believe Freedom House.

In the last few years, it has finally sunk in that the "End of History" idea is not right (at least, for now). People are waking up to the possibility that the spread of democracy and human rights from 1945 to 2000 might have been partially a byproduct of U.S. power.

But there is still the notion that the U.S.' economy and military are both so strong that we are guaranteed to retain preeminence over any foe or combination of foes.

But now consider the combination of China and Russia, the other two victors of World War 2. These countries are each poorer than us on a per capita basis, which reflects the inferiority of their economic and political systems in terms of creating human welfare. But their draconian systems have, so far, allowed them to retain control over vast territories (17% of the world's land area) and huge populations (21% of humanity).

What's more, these countries are now both clearly opposed to American power and influence - Russia more so than China, given the war in Ukraine. The two countries have resolved the enmity and territorial disputes that existed between them in the Cold War, and are now de facto allies.

So I thought it would be useful to compare the "tale of the tape" - the basic resources that the U.S. possesses, compared to the emerging alliance of Russia and China. Here is a table I whipped up: 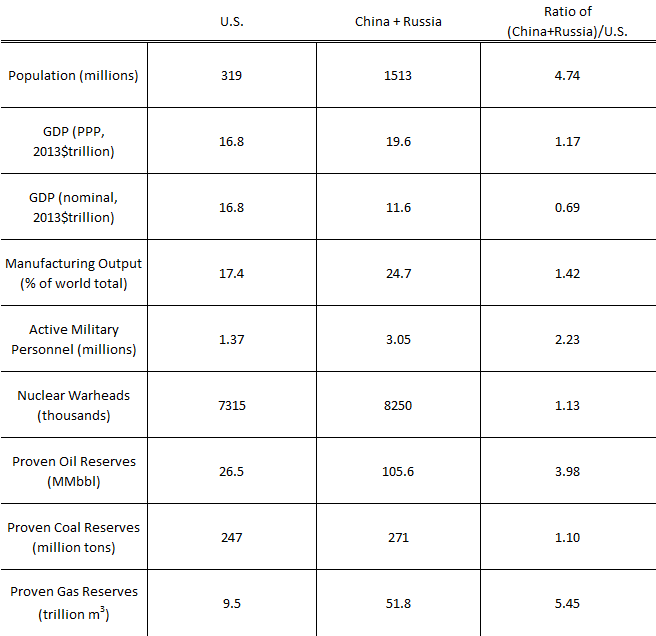 Notice how in all categories except for nominal GDP, the U.S. is outclassed by the combination of the other two powers - sometimes by an enormous margin.

There are some caveats, of course, including but not limited to the following:

* Given China's greater growth rate, the GDP and Manufacturing disparities will continue to move in the direction of China+Russia.

* The nuclear warhead number is the sum of both tactical and strategic warheads, though the strategic-only numbers are similar.

* I did not include specific weapons systems, since I am not sure about the strategic relevance of any of these. For example, Russia has many more tanks and mobile ICBMs than the U.S., while the U.S. has many more aircraft carriers. I am simply not sure how useful tanks, mobile ICBMs, and aircraft carriers really are at this point. Nor do I know about differences in weapon quality. But it's worth noting that in both WW2 and the Cold War, GDP ended up mattering more than initial levels of military tech in determining the eventual victor.

* Some argue that China and Russia are not true allies. However, this was also true of the U.S. and China in the latter part of the Cold War - and, for that matter, the U.S. and USSR in WW2. Predictions that Russia and China will come into conflict over Russia's Far East have so far proven to be total fantasy, and the two countries have moved ever closer together.

* The U.S. might be able to count on allies in an actual war - Britain, France, and/or Germany in a European war against Russia, and Japan and/or India in an East Asian war against China. So this might not be an appropriate comparison; indeed, I think that building strong alliances is our best hope of countering a China-Russia alliance. Note also that China+Russia might be able to draw on some allies as well, such as Pakistan (against India) or North Korea (against Japan).

Anyway, I think that the numbers should demonstrate to all but the most blinkered observers that the U.S. is not facing an opponent whose resources are far less than ours, as we did in both WW2 and the Cold War. For the first time since the early days of our country, our rivals have more resources than we do - and the disparity is getting larger every day. Despite the obvious superiority of our governmental and economic systems, we are not guaranteed to prevail in a power struggle against a Russia-China axis. Henry Kissinger knew this, which is why he always warned that we should be closer to either China or Russia than those two countries were to each other. But in recent years that has proven to be impossible.

Now hopefully, this blog post, and others that point out the same facts, won't matter at all. Hopefully, there will be no new Cold War or anything like it. But just in case this is where things are headed, it pays to be honest with ourselves about the facts.
Author: Noah Smith Posted at 9:55 PM