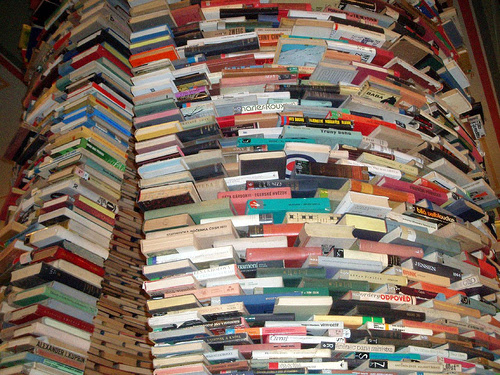 My last post was a mainly negative review of David Graeber's Debt: The First 5,000 Years, and a while before that I posted a decidedly mixed review of Kartik Athreya's Big Ideas in Macroeconomics. So commenters are justified in pestering me to list my favorite books (other than sci-fi). Here's a short list. If your favorite book isn't on here, it's either because (in order of decreasing likeliness): A) I haven't read it, B) I read it a while back, C) I didn't happen to think of it off the top of my head, or D) I didn't like it that much.

1. Guns, Germs, and Steel, by Jared Diamond
An obvious choice. The most original and compelling "big arc of history" thesis I've ever read. And contains pages and pages of details about domesticable plants, which I love reading about, because hey - domesticable plants.

2. The Better Angels of Our Nature, by Steven Pinker
This reads like the anti-Graeber. So on point, so forceful, so focused. Such clarity and readability. There is the occasional howler, as in Graeber, but far fewer, and sources are cited. Pinker successfully makes the case that we live in a much more peaceful world than ever before.

3. Why the West Rules - For Now, by Ian Morris
This one didn't really have as clear a thesis about the big arc of history, but the important thing here is the data - the first hard data I've ever seen on which civilizations were the most developed at which point in time.

1. The Myth of the Rational Market, by Justin Fox
The single best pop econ book ever written - a complete history of financial economics. It made me want to join the field.

2. The Undercover Economist, by Tim Harford
This is a managerial econ course in a book - no equations, but read it and you will understand all the concepts. Professors, you could assign this to your class instead of a textbook.

3. When Genius Failed, by Roger Lowenstein
The best history book about the financial industry that I've ever read.

5. The Big Short, by Michael Lewis
This book is great at conveying what the modern finance industry is really like. Of course, everything by Michael Lewis is worth reading. Liar's Poker is the most fun, of course.

6. The Occupy Handbook by various authors, edited by Janet Byrne
A wonderful collection of essays about the financial crisis, the recession, and problems in our economy today. I even loved David Graeber's chapter!

7. The Second Machine Age, by Erik Brynjolfsson ad Andrew McAfee
The single best book on the "rise of the robots" question. Doesn't have a strong conclusion about what to do about automation and the economy, but that's because humanity just doesn't quite know what to do yet! Jam-packed with information.

8. Time to Start Thinking, by Edward Luce
The case for economic nationalism and institutional renewal.

9. A Random Walk Down Wall Street, by Burton Malkiel
The best personal finance book. Just reading this book will save the average person thousands of dollars.

10. Zombie Economics, by John Quiggin
Someone had to write this one. Quiggin did it exceptionally well, IMHO.

12. My Life as a Quant, by Emanuel Derman
An excellent memoir by a very smart and cool dude.

1. Nightwork, by Anne Allison
Why Japanese companies are killing Japanese families. Actually, that should have been the subtitle.

2. Can Japan Compete?, by Michael Porter and Hirotaka Takeuchi
A bit dated, but a great look at some of the micro reasons why Japan's economy petered out in the early 1990s. Not intended as a defense of neoliberalism at all, but this is the book that first made me think that neoliberalism might be good for Japan (and might have been good for us, back in the day).

3. Democracy Without Competition in Japan, by Ethan Scheiner
Read this to understand Japanese politics, at least through the early 2000s.

4. The Making of Modern Japan, by Marius Jansen
The best history of Japan, period.

5. The Rising Sun, by John Toland
A great history of WW2 from the Japanese perspective. It will permanently shatter any stereotype of Japanese people as conformist, obedient, etc.

1. The Pleasure of Finding Things Out, by Richard Feynman
Everything by Feynman is good; this is the best.

3. Autumn in the Heavenly Kingdom, by Stephen Platt
An eye-opening account of the Taiping Rebellion, the Chinese version of Armageddon.

4. Genghis Khan and the Making of the Modern World, by Jack Weatherford
The story of a boy who came from nowhere to conquer the world, who tried to singlehandedly yank the middle ages toward liberalism, and who of course failed.

5. A World Undone, by G.J. Meyer
An eye-opening account of World War I, the European version of Armageddon.

6. Destiny Disrupted, by Tamim Ansary
An informal history of the world from a Muslim perspective.

8. Empires of the Sea, by Roger Crowley
A gripping account of the desperate dirty battles between Spain and Turkey in the 16th Century.

9. Delivering Happiness, by Tony Hsieh
I don't read many autobiographies, but this one is great. It made me a Hsieh groupie, and I've never even met the man.

10. Mindset, by Carol Dweck
The only self-help book you'll ever need.

11. The Clockwork Universe, by Edward Dolnick
The history of how Descartes, Copernicus, Kepler, Galileo, Boyle, Hooke, and Newton destroyed the old world of magic and superstition and made it safe for science and rationality - the most important thing that has ever happened to humankind.

12. How the Scots Invented the Modern World, by Arthur Herman
Just one reason Scotland is awesome. Well, many reasons, actually.


(Reminder: Most books not on this list are simply books I haven't read, or read so long ago that I can't remember them clearly. My list of books to read is very long indeed...)
Author: Noah Smith Posted at 8:59 PM