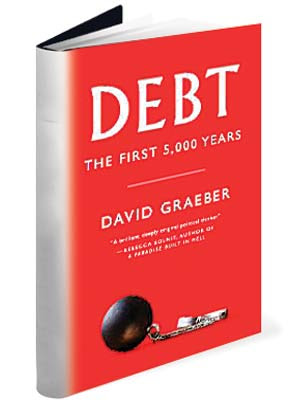 A while ago, I wrote a rather acerbic critique of one of David Graeber's magazine articles, in which I mentioned his book, Debt: The First 5000 Years - which, at the time, I hadn't read. This angered a bunch of Graeberites, not to mention Graeber himself. And to be fair, I do have a bad habit of passing judgment on books before I read them. So, in keeping with my new philosophy of fairness and open-mindedness, I read the whole thing.

Now, from interacting with David Graeber on Twitter, I have a sneaking suspicion that he is a certain type of Public Intellectual - the type who bristles with anger at the mildest criticism. This type of Intellectual will view any paraphrase of his ideas by a critic to be a total and utter misreading and misrepresentation of what he intended to say, no matter how close the paraphrase is to the original - deviate one word from exact quotation, and you're a Vile, Intellectually Dishonest Boor (V.I.D.B.) who obviously couldn't be bothered to read what the author actually wrote. As for exact quotations, those are certain to be out of context. Just as there is no physically exact model of the Universe except for the Universe itself, there is no representation of the Touchy Intellectual's thought that is accurate except for the Intellectual's own complete and unabridged oeuvre. (Paraphrasing by supporters and fans, of course, is perfectly legit, as long as their support and fandom is unqualified.)

Now if I'm right, and if Graeber is this sort of fellow, then this review is in trouble before it gets started, because the main problem with Debt: The First 5000 Years is that after slogging through all 560 pages, I can't for the life of me tell what point it's trying to make about the phenomenon of debt. This means that in order to say anything about what I think this book might be saying, I will have to paraphrase heavily, which means that Graeber and the Graeberians will undoubtedly conclude (quite vociferously) that I am either lying about having read the book, or am simply a village idiot, and Tweet-spam me accordingly.

OK, so now that we've dispensed with the pleasantries...

Debt is a sprawling, rambling, confused book, mostly about economic history, mixed with some political and moral philosophy. It begins with a discussion of the "textbook" economic history about the transition from barter to money economies, and debunks this with historical evidence. Barter was actually never common. Graeber thinks this will come as a big shock to economists, and indeed it might to some, though monetary economists are well aware that before the advent of currency, credit arrangements were the standard form of payment, and were usually denominated in units of real commodities. Graeber discusses why this kind of payment, which doesn't have a standardized unit of account, is technologically difficult and clunky. He mentions some intermediate solutions, such as using fictitious units of account with fixed prices in bilateral credit arrangements (e.g. one goat = 5 "doubloons"), or using ingots of metal as a rough-and-ready unit of account. He also discusses how currency came into use primarily as a result of war (much of this point is actually sprinkled throughout the later sections).

This was the most interesting part of the book, and I learned some very interesting things from it. However, it would have been nice if Graeber had sat down and talked with an actual monetary economist before writing this section, instead of just reading Econ 101 textbooks. An hour or two of conversation with Miles Kimball, David Andolfatto or Steve Williamson - to name three people I've chatted with about these ideas - would stimulate many interesting thoughts and crystallize others, greatly enriching these sections of the book. Graeber shows keen economic intuition, actually, and I'm sure he could publish papers in monetary economics if he set his mind to it, but of course he has bigger fish to fry.

Most of the book, however, is not about the mechanics of debt, but about its connection to moral issues. If Debt can be said to have a basic thesis, it's that debt has a moral dimension, and that this moral dimension enables people to do bad things to other people. (Yes, I paraphrased; cue brickbats from Graeberians!)

Graeber advances this thesis indirectly. The bulk of the book describes a long sequence of bad things that have been done to people in the past - mostly some form of slavery or another. The upshot of this long litany, though it is never explicitly stated, seems to be that commerce - exchange, markets, capitalism, pick your preferred term - is fundamentally exploitative, and is fundamentally about turning free people into slaves. This is a pretty standard leftist idea. But by always reminding the reader that these arrangements of commerce/exchange/capitalism are carried out via the mechanism of debt, Graeber pours this old wine into a new glass. Capitalism is bad, and debt is the mechanism of capitalism, therefore it is upon the idea of debt that we must turn our disapprobation.

Many times throughout the book, Graeber rails against the fact that the morality of "paying one's debts" functions as a mechanism for keeping debtors in bondage to creditors. But a few times, Graeber actually reverses the equation, and laments the power that debtors can sometimes exercise over creditors, quoting the old saw that "if you owe the bank a hundred thousand dollars, the bank owns you; if you owe the bank a hundred million dollars, you own the bank." In other words, whether debt gives power to creditors or debtors, power is the bad thing, and debt is merely the mechanism by which power is expressed.

Now, this may sound a little silly - if someone wrote a book called "Metal: The First 5,000 Years," and then filled that book with stories of war and bloodshed, never failing to remind us after each anecdote that metal was involved in some way, we might be left scratching our heads as to why the author was so fixated on metal instead of on war itself. And in fact, that is indeed how I felt for much of the time I was reading Graeber's book. The problem was exacerbated by the fact that Graeber continually talks around the idea of debt in other ways, mentioning debt crises (without reflecting deeply on why these happen), the periodic use and disuse of coinage (which apparently is just as bad as debt in terms of enabling the capitalism monster), and any other phenomenon related to debt, without weaving these observations into a coherent whole.

In other words, I am now angry at myself for paraphrasing the book, and trying to put theses into Graeber's mouth, because this is such a rambling, confused, scattershot book that I am doing you a disservice by making it seem more coherent than it really is.

The problem of extreme disorganization is dramatically worsened by the way that Graeber skips merrily back and forth from things he appears to know quite a lot about to things he obviously knows nothing about. One sentence he'll be talking about blood debts and "human economies" in African tribes (cool!), and the next he'll be telling us that Apple Computer was started by dropouts from IBM (false!). There are a number of glaring instances of this. The worst is not when Graeber delivers incorrect facts (who cares where Apple's founders had worked?), it's when he uncritically and blithely makes assertions that one could only accept if one has extremely strong leftist mood affiliation. The most egregious example of this occurs in the book's conclusion, when Graeber writes:

I would like to end, then, by putting in a word for the non-industrious poor. At least they aren't hurting anyone.

Both the declaration that the non-industrious poor aren't hurting anyone and the implication that being "industrious" probably is hurting someone are obviously false. But Graeber delivers absurdist sentences like this with the same calm assurance with which he tells us about when coinage first became popular in the Mediterranean.

Not only does this have the effect of diminishing Graeber's credibility as a narrator (what if he's wrong about the blood debts too?), but it makes a careful, critical reading of the book nigh impossible.

Now if you have strong leftist mood affiliation - i.e., if you've already bought into most of the background ideology that suffuses Graeber's book - then you will probably nod your head as you read this rambling mess of a book, and come away with the feeling that debt, in some way or another, is another star in the constellation of nasty concepts that you associate with the capitalist machine. But if you don't, you might walk away thinking "What was I supposed to take away from that? That debt is, like, bad, or something?"

Or at least you would if you had read Debt in 2007. But Debt was published in 2011, when legions of middle-class and poor Americans had just seen their wealth wiped out by a housing crash, and yet who were still on the hook for the money they had borrowed to buy those houses. With Americans drowning in debt, the message of a debt jubilee - a general bailout, not just for the big banks that started the whole mess - seemed very attractive (I, for one, would definitely have supported it!). So I'm sure it resonated with a lot of people when Graeber wrote:

It seems to me that we are long overdue for some kind of Biblical-style Jubilee: one that would affect both international debt and consumer debt. It would be salutary not just because it would relieve so much genuine human suffering, but also because it would be our way of reminding ourselves that...paying one’s debts is not the essence of morality, that all these things are human arrangements and that if democracy is to mean anything, it is the ability to all agree to arrange things in a different way.

That sounds like something we should have done more of in the years following the bursting of the housing bubble. But - and here I just want to editorialize a bit, since I deserve it after reading 560 pages of Graeber - as a general, regular thing it sounds like a bad idea. It smacks of the idea that wealth redistribution should be opportunistic rather than systematic - that the government should use debt cancellation in place of regular systems of welfare, thus replacing redistribution to those most in need with redistribution to those who are boldest in asking for "loans."

Anyway, now I'm rambling. To wrap up the review, Debt: The First 5,000 Years is not a book I recommend. It contains some interesting tidbits, but these are not worth the cost of the slog. Perhaps capitalism is a rotten, inhumane system that kills relationships, rewards violence and trickery, and enslaves us all to the brutal logic of the market before inevitably destroying the planet. Or perhaps not. But either way, there's little insight to be gained by reframing the issue in terms of debt. Or if there is, I'm damned if I can find that insight in this book. Perhaps the next 5,000 years will prove more enlightening.
Author: Noah Smith Posted at 11:45 PM