A while ago I blogged about a paper by Roger Gordon and Gordon Dahl that showed that economists aren't ideological - or, at least, that their ideology doesn't line up much with the American left-right political axis. Now a trio of economists, Zubin Jelveh, Bruce Kogut, and Suresh Naidu, have come out with a very rigorous empirical analysis on the subject. They comb through a bazillion papers and do word analysis on the text! This paper is really impressive - it's very rigorous and obviously took a ton of work and careful thought.

The authors discuss their paper at 538.com, and they emphasize that they do find evidence of ideology in the way economists write their papers. But Kevin Drum, blogging about the paper, points out that the results, while statistically significant, don't look that economically significant - i.e., not that big:

What I see is a nearly flat regression line with a ton of variance. Those blue dots are all over the place. If the authors say their results are statistically significant, I believe them, but it sure looks to me as if (a) the real-world error bars are pretty big here, and (b) economists as a whole are remarkable unbiased. I mean, look at that chart again. I would have expected a much steeper line. Instead, what we see is just the barest possibility that ideology has a very slight effect on economists' findings.

If these results are actually true, then congratulations economists! You guys are pretty damn evenhanded.

I agree with Drum. That's just not a lot of ideology. Although it's hard to interpret the meaning of the slope of the regression line - it depends on the economic impact of the policy recommendations that the y-axis represents - the fit of the regression line is obviously very low. This is true for all of the various ideology measures the authors use: 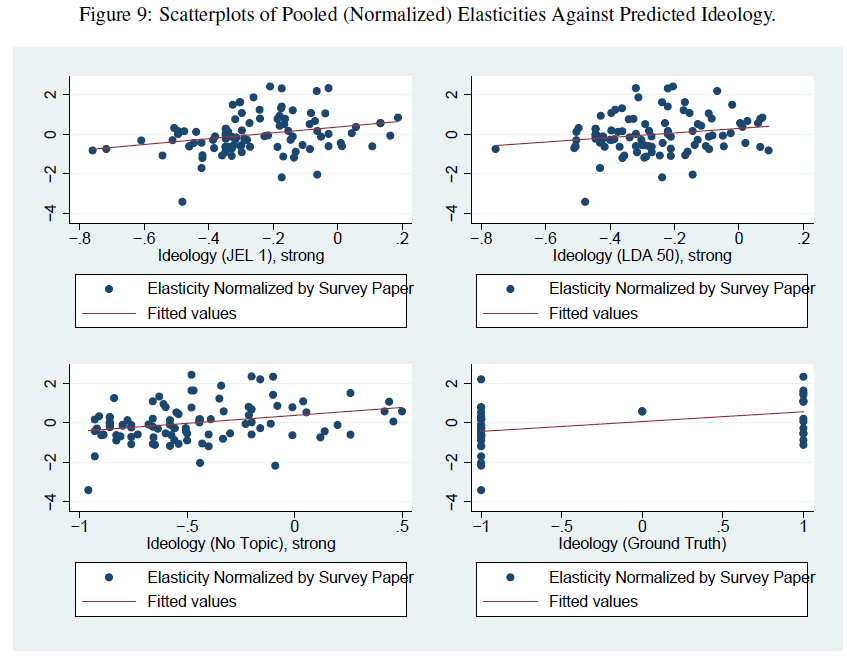 So political ideology, as far as we can tell, just doesn't explain much of the variance in academic economists' policy recommendations. Keep in mind that absence of evidence is not evidence of absence - the authors simply might not have measured ideology accurately.

But given the fact that economists deal every day with topics that are inherently political, I'm surprised we don't find more bias in paper-writing.

And there's also the possibility that the sample is heavily influenced by a few outliers. There are a couple of departments out there that may be influenced by big donations from political activists. That might inject a few politicized folks into the academic mix. (Update: Matthew Martin makes this point graphically.)

So overall, I think my thesis that most of econ doesn't line up along left-right political lines seems like it's borne out by the data. Still, that leaves the possibility that a few policy issues, or a few top economists, might be strongly motivated by political ideology. I'm sure we can all think of one or two anecdotes.
Author: Noah Smith Posted at 3:26 PM