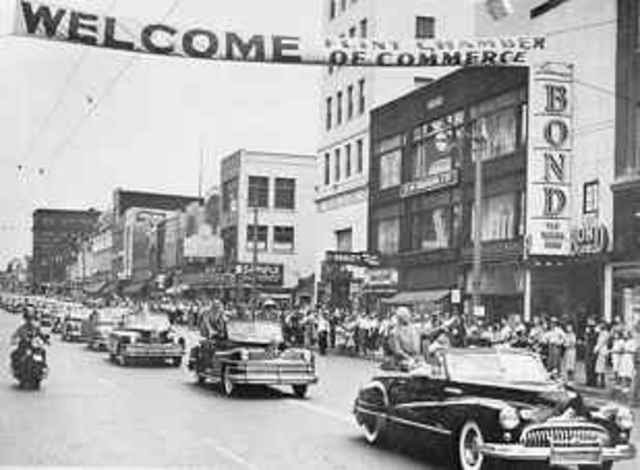 A potted history of American political economy goes like this: After WW2 and the Depression, the laissez-faire/cronyist developing-country economy we had earlier was replaced with a corporatist one. The corporate welfare state, supported by a thicket of government regulation and high taxes, and given a sense of stability and security by the deglobalization that occurred in the mid-20th century, created a middle-class nation. Most workers had well-paying, secure jobs, although some outsiders (women, blacks, the poor) were excluded from the cushy system. Worker bargaining power was strong and unions flourished. The power of the corporation was yoked to the interests of the workers. Then, beginning in the early 70s, neoliberal policies replaced corporatist ones, Deregulation, the rise of shareholder capitalism, and the resumption of globaliztion crushed the old corporatist system, leading to a bifurcation of the middle class and to the end of job security.

If you believe something resembling this potted history, that still leaves a big question: Was the end of corporatism driven mainly by globalization or mainly by domestic politics (assuming we reject conservatives' preferred explanation, the "rise of the robots")? If foreign competition, first from a resurgent Europe and Japan and later from China and a whole host of poor countries, made America's cushy managerialist corporate welfare state simply unviable, then neoliberalism can be seen as a natural, necessary response, however suboptimal its implementation was. But if you think that domestic political changes - the switch of the South to the Republican party, for instance, or the introduction of big money into politics - drove the neoliberal revolution, then you'll probably conclude that neoliberalism can be politically reversed without doing much damage to the economy.

I see this as being big debate among American liberals. The ambivalence can be felt in this recent Brad DeLong post:


On the two-year and ten-year agendas...are dealing with and reversing the enormous upward redistribution that has taken place with the rise in the social, political, and economic power of the Overclass. That is:
Underlying this position is a belief, perhaps, that so much of what is produced is so close to a joint Leontief product that something like the marginal product theory of distribution is profoundly unhelpful, and that questions of distribution are overwhelmingly resolved by economic bargaining power conditioned by social mores and politically-chosen institutions. Perhaps there used to be three sources of bargaining power, and thus three sources of durable advantage:
And then, perhaps, over the past generation the third has dropped away, with the coming of globalization and the successful war against private sector unions. The rest are now themselves in flux. And perhaps they have been joined as a source of rent-extraction by those with the ability to tap into the savings produced in this age of the Global Savings Glut…

But I think that the sources of this enormous upward redistribution have not yet been properly sorted-out.

DeLong is conflicted. He is a rationalist, and so he concludes that he does not have enough data to decide whether globalization or domestic politics was mainly to blame. Not having enough data, he cannot bring himself to make a policy conclusion about how to achieve the second of his three objectives ("rebalancing the corporation", i.e. restoring corporate welfare). DeLong is like me in this way. I try to assess the data objectively first, then think about solutions only after making the assessment of the facts.

But Marshall Steinbaum, the young colleague whose post DeLong is responding to, is no such rationalist. There is no question which culprit he will blame. And there are many others like him. So I think that in the internal liberal argument over the reason for corporatism's collapse, the people who think the shift was political are almost certain to win.

There are three reasons for my prediction.

First, people would rather be powerful than powerless. If globablization is responsible for the end of the corporate welfare state, then the corporate welfare state is not coming back in our lifetimes. And the veto points in the American political system, combined with an increasingly rejectionist Republican party, mean that a government welfare state along European lines will be very difficult to implement here in America. So believing that we could choose to reinstall corporatism without big adverse effects is an empowering belief.

Second, people are afraid to be seen as anti-trade, or protectionist. In actuality, globablization couldn't be reversed by U.S. protectionism. Corporatism might be restored here at home, but the loss of our export markets would make it a pyrrhic victory. So believing that globalization killed corporatism is NOT actually an argument for protectionism. But people will see it as such. That means if American liberals start blaming globalization, they'll get A) a lot of people actually trying to implement protectionist measures, and B) a ton of flack from defenders of free trade, a concept that is still enshrined with pride of place throughout the econ and public policy worlds.

So for these reasons, I predict that we will see more liberals decide that the corporate welfare state can and should be restored by political fiat - whether or not that is actually possible or desirable.
Author: Noah Smith Posted at 3:27 PM