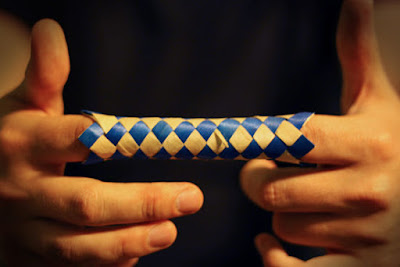 
Why is there so little inflation now? How will a rate rise affect inflation? How can we trust models of the latter that are so wrong on the former?

Well, why don't we turn to the most utterly standard model for the answers to this question -- the sticky-price intertemporal substitution model. (It's often called "new-Keynesian" but I'm trying to avoid that word since its operation and predictions turn out to be diametrically opposed to anything "Keyneisan," as we'll see.)

I started with the observation that it would be nice if the model we use to analyze the rate rise gave a vaguely plausible description of recent reality. 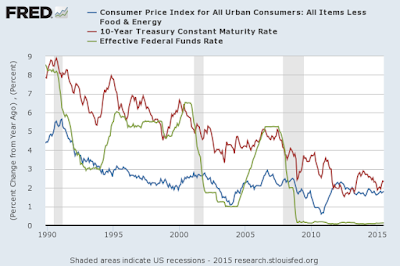 That view represents the conventional doctrine, that an interest rate peg is unstable, and will lead quickly to either hyperinflation (Milton Friedman's famous 1968 analysis) or to a deflationary "spiral" or "vortex."...

But in 2008, interest rates hit zero...The conventional view predicted that the broom will topple. Traditional Keynesians warned that a deflationary "spiral" or "vortex" would break out. Traditional monetarists looked at QE, and warned hyperinflation would break out...

The amazing thing about the last 7 years in the US and Europe -- and 20 in Japan -- is that nothing happened! After the recession ended, inflation continued its gently downward trend.

This is monetary economics Michelson–Morley moment. We set off what were supposed to be atomic bombs -- reserves rose from $50 billion to $3,000 billion, the crucial stabilizer of interest rate movements was stuck, and nothing happened.

This is a powerful argument, and I think that those who sneer at Neo-Fisherism don't take it seriously enough.

That said, there are some serious caveats. The first is that although the recent American and Japanese experience with QE are powerful pieces of evidence, they are by no means the only pieces of evidence or the only policy experiments. What about the Volcker disinflation, when Fed interest rate hikes were followed by disinflation? I assume there have been at least one or two similar episodes around the world in the last few decades.

Next, are we sure we want to think about interest rate policy as a series of interest rate pegs, each of which people believe will last forever? In the typical New Keynesian model, people believe something much more complicated - they believe that the Fed sets interest rates according to a Taylor-type rule, and monetary policy changes only cause people to change their beliefs when they represent a regime change - i.e. a change in the rule.

But the last reason we should be a little wary of the Neo-Fisherian idea is that it goes against our basic partial-equilibrium Marshallian idea of supply and demand.

Neo-Fisherianism goes against this intuition. Suppose the Fed lowers interest rates. Abstracting from banks, reserves, etc., it does this by printing money and using that money to buy bonds from people in the private sector. That increase in demand for bonds makes the price of bonds go up, and since interest rates are inversely related to bond prices, it makes interest rates go down.

That is weird! That totally goes against our Econ 101 intuition! How does dumping money on the market make money more valuable?? Well, it could be one of those weird general equilibrium results, like the "paradox of thrift" or the "paradox of toil". Or it could be because Neo-Fisherians make very strong assumptions about what the fiscal authority does. As Cochrane writes:


One warning. In the above model, the interest rate peg is stable only so long as fiscal policy is solvent. Technically, I assume that fiscal surpluses are enough to pay off government debt at whatever inflation or deflation occurs.  Historically, pegs have fallen apart many times, and always when the government did not have the fiscal resources or fiscal desire to support them. The statement "an interest rate peg is stable" needs this huge asterisk.

This makes sense, and it seems like a good reason to wonder if interest rate policy really is best viewed as a series of pegs. If interest rate pegs historically fall apart because the fiscal authority couldn't do its part in maintaining them, it stands to reason that people wouldn't generally expect the current interest rate target to be permanent. Instead, it might be more reasonable for people to expect something more along the lines of a Taylor-type rule, as in the standard New Keynesian model.

Anyway, Neo-Fisherianism continues to be an interesting idea, but I continue to have serious doubts. I want to see international evidence, and evidence with "high" pegs as well as "low" ones, before I believe we've seen a Michelson-Morely moment. I do agree, however, that everyone who still has a standard, Milton Friedman type concept of how monetary policy affects inflation needs to be doing some serious rethinking right now.

In the comments, Steve Williamson writes:


[I]n the VAR evidence, it can be hard to get rid of the "price puzzle." That was called a puzzle because tight monetary policy led to higher prices. Maybe that's not so puzzling.

He points me to this Handbook of Macroeconomics chapter by Valerie Ramey, whose section 3 concerns VAR studies of monetary policy. Ramey describes the Price Puzzle on p. 27:


Another issue that arose during this period was the “Price Puzzle,” a term coined by Eichenbaum (1992) to describe the common result that a contractionary shock to monetary policy appeared to raise the price level in the short-run...

Christiano, Eichenbaum, and Evans’ 1999 Handbook of Macroeconomics chapter...summarized and explored the implications of many of the 1990 innovations in studying monetary policy shocks. Perhaps the most important message of the chapter was the robustness of the finding that monetary policy shocks, however measured, had significant effects on output. On the other hand, the pesky price puzzle continued to pop up in many specifications.

So the evidence from the 1990s and earlier says that monetary policy works in the classically expected direction (rate hikes lower inflation, rate cuts boost it), but that in the very short term after a policy change, the direction of the effect is often reversed.

But if you look at Cochrane's Neo-Fisherian impulse response graph, that's exactly the opposite of what Ramey talks about: 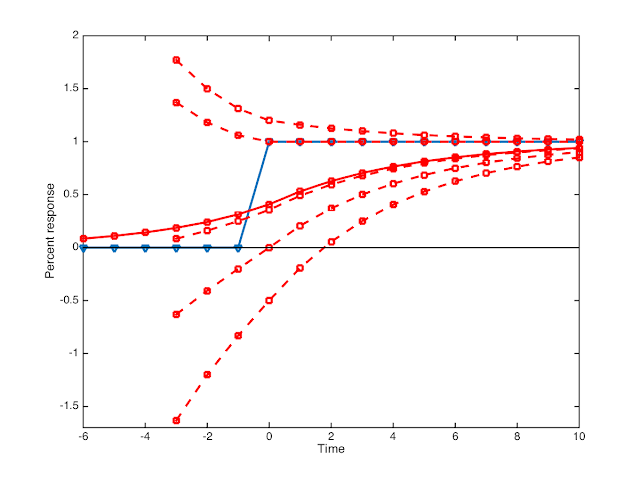 In this graph, a rate hike is followed first by an indeterminate or perhaps negative jump in inflation, then by a slow convergence in the direction of the interest rate. But Ramey's summary of the evidence is that a rate hike is followed by an indeterminate or perhaps positive jump in inflation (the Price Puzzle), followed by a longer-term downward movement in inflation. In other words, exactly the opposite of the above graph.

So I still think this is a puzzle for Neo-Fisherism.

Steve also has a post responding to mine. Particularly interesting is the argument that Volcker's rate hikes in the early 1980s actually made the inflation situation worse, and that it was his subsequent rate cuts that actually whipped inflation. I'm probably more open to that story than most people, but I think there are a number of things about it that are very fishy, e.g. the fact that inflation started going down after the rate hikes instead of rising further.

Steve also shows a graph that displays a positive correlation between interest rates and inflation. However, this sort of logic leads would also lead us to believe that going to the doctor is the cause of illness, so I would rather trust the VAR evidence that Ramey cites in the chapter Steve linked to. Of course, I don't trust that VAR evidence that much, since it's hard to get credible structural identification on a VAR.

As a final random fun note, the Ramey chapter - which appears on the Hoover Institute's website - contains the following footnote on page 25:


Of course, this view was significantly strengthened by Kydland and Prescott’s (1982) seminal demonstration that business cycles could be explained with technology shocks.