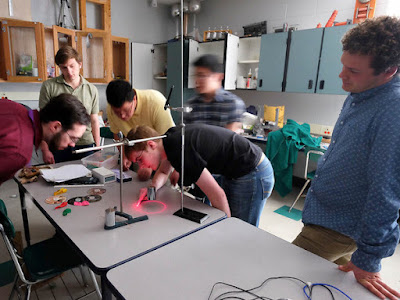 I wrote a post for Bloomberg View about how Econ 101 needs more empirics (a favorite hobbyhorse of mine). They titled it "Most of What You Learned in Econ 101 is Wrong", which was a catchy but inaccurate title, since the word "wrong" is often unhelpful in describing scientific theories. For example, in the post, when writing about minimum wages, I wrote:


That doesn't mean the [Econ 101] theory is wrong, of course. It probably only describes a small piece of what is really going on in the labor market.

The answer, of course, is that "right" and "wrong" are not very descriptive, helpful adjectives in this situation.

Anyway, there's the question of what to teach kids. Personally, I think that you should teach kids empirics no matter how good your theories are. High school physics and chem classes teach simple theories that are amazingly good at explaining a lot of real phenomena, but they also make sure to include lab experiments, so that kids can see for themselves that the theories work. And those are high school kids; college kids will be even more capable. There's no reason a college econ student shouldn't learn how to run regressions in 101.

But I think this becomes even more important when Econ 101 theories have poor fit. People tend to confuse treatment effects with goodness of fit, so if you teach kids a bunch of theories with poor fit but which get the sign of the treatment effect right, the kids will leave class thinking that these theories explain a lot more of the world than they really do.

This distinction is what some critics of my Bloomberg View post don't seem to get. For example, David Henderson writes:

In other words, in most cases there is a small, presumably negative, effect on employment. And presumably in the other cases there is a large effect. How, exactly, does this contradict the claims that Mankiw makes and that many of us teach in our equivalents of Econ 101? It doesn't.

In this case, the theories that Econ 101 books (like Mankiw's) teach tend to get treatment effects of the right sign - minimum wage hikes of the typical size probably do have a (very small) negative effect on employment. When Henderson says that the evidence doesn't "contradict" the theory, he means that the theory gets the sign of the treatment effect right.

The problem is that by emphasizing theory so much, and by relegating evidence to some brief asides, Econ 101 textbooks (and classes) will tend to trick kids into thinking that the theories have better fit than they do. When you make people learn a theory in detail, I think they naturally tend to believe that the theory has strong empirical fit unless they see evidence to the contrary.

Now Mankiw doesn't disregard evidence, and Henderson gives an example of the way that Mankiw presents it:

Although there is some debate about how much the minimum wage affects unemployment, the typical study finds that a 10 percent increase in the minimum wage depresses teenage employment [by] between 1 and 3 percent.

To these kids, econ theories must seem like received wisdom. Even evidence, when presented only as a brief aside with no understanding of methodology, must also seem like received wisdom. Again and again, I talk to econ students who complain that they are expected simply to swallow what they are taught - unlike in their science classes. College kids are smart, and many of them are skeptical. They grow up learning that "science is the belief in the ignorance of experts." That doesn't tend to sit well with the kind of "received wisdom" approach that almost every intro econ textbook takes. Nor should it.

So while I definitely don't want to pick on Mankiw - his books really are excellent, my personal favorites - I think that most intro econ textbooks use this "received wisdom" style of theory-centric education with only brief references to empirical findings. That tends to result in students who either A) believe too much in the power of the theories they learn, or B) disbelieve and distrust econ in general. I see a lot of examples of both (A) and (B). Both of those outcomes do a disservice to the world.
Author: Noah Smith Posted at 4:13 PM