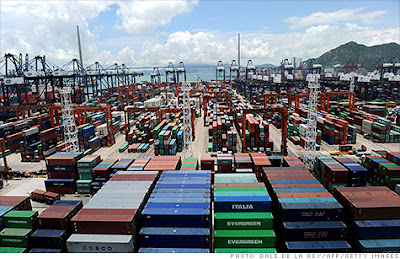 David Autor recently went on Russ Roberts' EconTalk podcast to talk about his new paper about China trade. The Autor paper, co-authored with Dorn and Hanson, has been a real bombshell in the econ world, since it seems to challenge the "consensus" on free trade. Economists have long asserted confidently - in public, though not always in private - that free trade is always good, and now some top economists have shown that maybe it's not always good. That's a big deal.

Roberts and Autor do a very good job of zeroing in on why free trade might not be good, and why it might not have been good in the case of China. The reason is distribution - trade can hurt some people, especially if the government is not perfectly efficient in using redistribution to cancel out the distributional effects of trade (which of course it never is). This has been known for a long time, but economists often wave their hands and ignore distribution.

Autor et al. have basically made a splash by failing to ignore this very important thing. They treat distribution as important by assumption, and then they check that assumption by showing that govt efforts to cancel out the distributionary effects of trade have been woefully inadequate. Roberts, to his great credit, does not do the "annoying online libertarian" thing, and simply wave away distributionary concerns (as, say, Bryan Caplan might do if he were doing podcasts). In fact, Russ once again comes off as a very pragmatic, situationalist, intuition-driven sort of fellow - the kind of thinker I believe we need more of (and that Brad DeLong says have made America great).

One very interesting point in the discussion is when Autor says that trade between rich countries is basically all upside. I think that this is a hugely important point that gets completely ignored in today's trade policy discussions, including by some of my favorite writers like Paul Krugman. Unfortunately, Russ doesn't follow up on this point, but it matters a lot, since the trade agreements we're now considering - the TPP and TTIP - are almost entirely agreements with rich countries. Some people seem to be treating the Autor paper like it applies to TPP and TTIP, but it just doesn't, and I wish this were talked about more.

Autor also mentions a couple of other potential downsides of trade. He mentions trade diversion from multilateral agreements - unfortunately this doesn't get followed up on. He also mentions trade deficits, correctly pointing out that in real terms, trade deficits are a loan, not a gift. This means that running trade deficits today is, at the country level, an impatient thing to do - it sacrifices the consumption of future generations to allow our current generation to consume more. Sadly, this point is not pursued much, but I guess podcasts have time constraints, and this one was already a bit long.

Anyway, a very good episode. I think I will do more reviews of EconTalk episodes! One thing I think Russ needs to get better at is critiquing empirical papers. In this episode, he brings up the possibility of multiple comparisons (which of course Autor accounted for, Autor being Autor). A better critique might have been to question the structural assumptions of the linkage model that allowed Autor et al. to conclude that the China trade shock reduced employment in aggregate. Now that econ is becoming more empirical, being able to get into the empirical weeds like that is going to be more and more important.

Update: Others have responded to the episode, as requested by Russ. This is great, since Autor's work, and the new controversy over trade, needs to be publicized a lot more!
Author: Noah Smith Posted at 2:30 PM