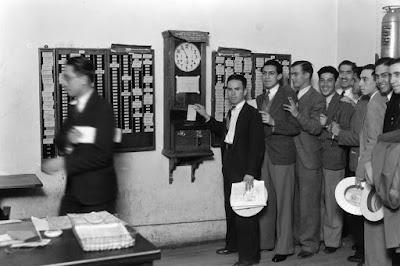 John Cochrane wrote a blog post criticizing the Obama administration's new rule extending overtime pay to low-paid salaried employees. Cochrane thinks about overtime in the context of an Econ 101 type model of labor supply and demand. I'm not going to defend the overtime rule, but I think Cochrane's analysis is an example of what I've been calling "101ism".

One red flag indicating that 101 models are being abused here is that Cochrane applies the same model in two different ways. First, he models overtime pay as a wage floor: 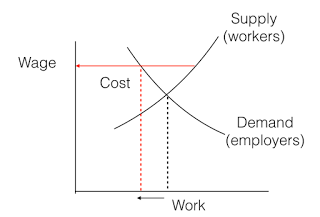 Then he alternatively models it as a negative labor demand shock: 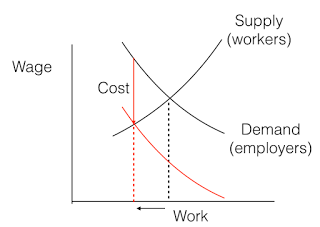 In fact, overtime rules are not quite like either wage floors or negative labor demand shocks. Overtime rules stipulate not a wage level, but a ratio between base wages and wages paid on hours worked per worker above a certain amount.

In the Econ 101 model of labor supply and demand, there's no distinction between the extensive and the intensive margin - hiring the same number of employees for fewer hours each is exactly the same as hiring fewer employees for the same number of hours each. But with overtime rules, those two are obviously not the same. For a given base wage, under overtime rules, hiring 100 workers for 40 hours each is cheaper than hiring 40 workers for 100 hours each, even though the total number of labor hours is the same. That breaks the 101 model.

With overtime rules, weird things can happen. First of all, base wages can fall while keeping employment the same, even if labor demand is elastic. Why? Because if companies fix the hours that their employees work, they can just set the base wage lower so that overall compensation stays the same, leading to the exact same equilibrium as before.

Now, to understand the true impact of overtime rules, we probably have to include more complicated stuff, like unobservable effort (what if people work longer but less hard?), laws regarding number of work hours, unobservable hours (since the new rule is for salaried employees), sticky wages, etc. But even if we want to think about the very most simple case, we can't use the basic 101 model, since the essence of overtime rules is to force firms to optimize over 2 different margins, and S-D graphs represent optimization over only 1 margin.