How bigoted are Trump supporters? 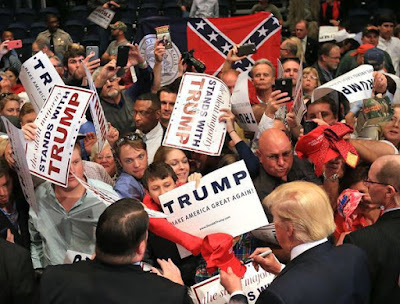 Jason McDaniel and Sean McElwee have been doing great work analyzing the political movement behind Donald Trump. For example, they've showed pretty conclusively that Trump support is driven at least in part by what they call "racial resentment" - the notion that the government unfairly helps nonwhites.

But "racial resentment" is not the same thing as outright bigotry. Believing that the government unfairly helps black people doesn't necessarily mean you dislike black people. So McDaniel and McElwee did another survey asking about people's attitudes toward various groups. Here's a graph summarizing their basic findings: 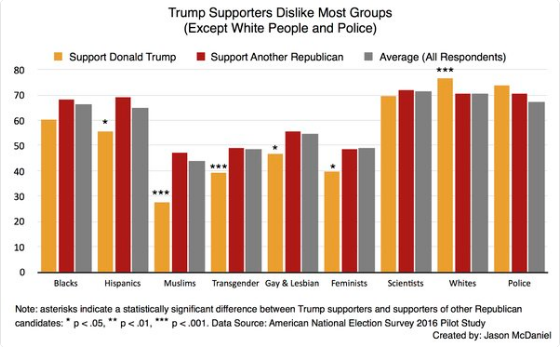 So, from this graph, I gather:

1. Trump supporters, on average, say they like Blacks, Hispanics, Scientists, Whites, and Police. On average, they say they dislike Muslims, Transgenders, Gays, and Feminists.

2. Trump supporters, on average, say they like Whites a bit more than average, Muslims a lot less, and Transgenders a bit less. They also might say they like Hispanics, Gays, and Feminists somewhat less, though the statistical significance is borderline.

This interpretation doesn't appear to be supported by Sean's own data. In fact, his data appear to support the opposite of what he claims.

Now, the main caveat to all this is that surveys like this almost certainly don't do a good job of measuring people's real attitudes toward other groups. When someone calls you on the phone (or hands you a piece of paper) and asks you if you like Hispanics, whether you say "yes" or "no" is probably much more dependent on what you think you ought to say than what you really feel. So this survey is probably mainly just measuring differences in how Trump supporters feel they ought to answer surveys.

But even if this survey really did measure people's true attitudes, it still wouldn't tell us what Sean claims it does. Trump supporters, overall, say they like Blacks. And the degree to which they say they like Blacks is not statistically significant from the national average. Only when it comes to Muslims and Transgender folks do Trump supporters appear clearly more bigoted than the national average.

But going back to the main problem with surveys like this, it might be that Trump supporters are simply more willing to express their dislike of Muslims and Transgender people in a survey. This may just reflect their general lack of education. More educated people are plugged into the mass media culture, which generally discourages overt expressions of bigotry toward any group. Less educated folks are less likely to have gotten the message that you're not supposed to say bad things about Muslims and Trans people.

So in conclusion, this survey doesn't seem to support the narrative that Trump supporters are driven by bigotry. That narrative might still be true, of course - there are certainly some very loud and visible bigots within Trump's support base (and within his organization). But after looking at this data, my priors, which were pretty ambivalent about that narrative to begin with, haven't really been moved at all.
Author: Noah Smith Posted at 2:43 PM