When will China make its move? 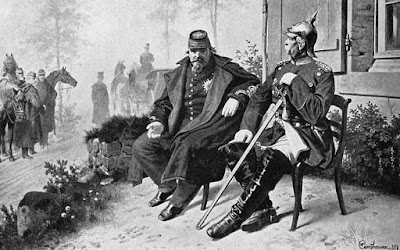 I'm now reading Paul Kennedy's The Rise and Fall of the Great Powers, so I thought I'd ask a disturbing, alarmist, but important question. If China makes a bid to overturn the U.S.-led global order by military force, when will that bid come?

(This sounds like a job for...amateur made-up political science!)

First, two preliminary questions: 1) Will such a bid really come? And 2) What would it look like?

My answer to (1) is "maybe, maybe not." So far, there have been several modern examples of great powers not trying to overturn the existing order by force. The UK dominated the seas and built a huge maritime empire, but never tried to leverage its global power to dominate the other great powers of Europe; instead, it tried to maintain a balance of power that allowed it to be rich and secure. The U.S. made a few aggressive moves in the early 1900s, but only reluctantly joined World War 1, and then tried to go isolationist in the interwar years - it eventually became a hegemon, but only reluctantly. And the Soviet Union made a lot of threatening moves and came close to fighting the U.S., but backed off repeatedly. So there's plenty of precedent for new powers refusing to try to overthrow the old ones by force - in fact, the only real violent attempts in the industrial age came from Germany (twice) and Japan. But there still seems to be a decent chance that China will launch an attack against the U.S.-led coalition, given the "Thucydides Trap." So let's consider what happens if it does attack.

As for question (2), my guess is that it would be a naval attack in the South China Sea (against the U.S.) or in the East China Sea (against Japan, which would then call for help from the U.S.). Tensions have been rising slowly but inexorably in both places. A decisive naval victory against the U.S. would A) push American power out of Asia and establish Chinese hegemony in its backyard, and B) cause the U.S.' allies all over the globe to realize that America could no longer protect them, thus effectively ending America's position as a global hegemon. Such a conflict probably wouldn't go nuclear - the U.S. signaled its willingness to die to protect Germany, France, and the rest of Europe from the USSR in the Cold War, but it seems unlikely that it would do the same just to protect freedom of the seas in Asia. So if an attack comes, I expect it to be China trying to sink our Asian fleet. If it does that, it wins.

OK, now on to the main question: When will such an attack come, assuming it comes? Let's imagine we live in a worst-case version of a Paul Kennedy world, where great powers only care about hegemony, rather than the welfare of their people, etc. In that case, this becomes like the old Econ 101 question of when to cut a forest. Basically, if China is going to attack, it will do so whenever the opportunity cost of attacking - i.e., the benefit of waiting - drops below a certain threshold.

So if we're in a Kennedy world, we can think of GDP, maybe with some extra exponent on productivity, as the percent chance of getting "flow hegemony" in the objective function after an attack. But before the attack, flow hegemony is zero (because in this cynical world, power doesn't matter if you don't use it to rule the world). And there's some time discount rate too. So basically, when China's economic growth and productivity growth slow down below some threshold rate (representing the discount rate in their hegemony objective function), that's the time to attack.

Current official figures are at around 6.6%, though the true figure may be closer to 5%. And many people think that only an unsustainable, unproductive debt-laden construction boom is keeping growth at that pace -- once it ends, many expect China to have to deal with the financial overhang from the boom, which could lead to a decade of slow growth. Productivity growth is much harder to measure, but what few data points we have point to a slowdown in recent years.

One big factor will definitely drag down Chinese growth in the years to come: population shrinkage. According to government estimates, the country's working-age population (15-60) has been declining since 2012, and has now shrunk by 26 million. The decline is projected to continue, accelerating sharply between 2020 and 2025: 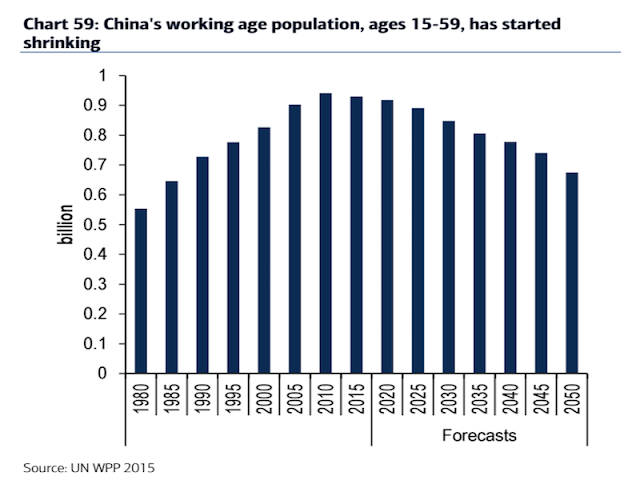 So after 2020, there will be a sharp decline in China's working-age population. If the "debt overhang" people (Chris Balding, Michael Pettis, etc.) are right, China will also have to deal with another sharp slowdown in growth sometime in the next few years. Meanwhile, productivity is slowing down as China reaches the technological frontier and is thus less able to acquire new tech through FDI joint ventures, forced tech transfers from multinationals, or industrial espionage.

All of this points to a Chinese attack sometime in the remaining years of this decade. IF, of course, they decide to attack at all, and if GDP enters the objective function in the way I just hypothesized.

In any case, after 2020, China's "window" for a successful overthrow of the U.S. might close. Rapid population aging and labor force decline, the slowdown of catch-up growth, and (possibly) the overhang from decades of debt buildup might do more than just reduce the benefit of continuing the "peaceful rise" strategy. They might actually cause severe domestic unrest in China, forcing the country to turn its energy toward domestic security matters. And even if that doesn't happen, China's inevitable economic slowdown may simply weaken the country's total military power, allowing the U.S. and its allies - perhaps including a fast-growing India - to retain hegemony into the indefinite future.

So I think that if China does decide to take the more violent, aggressive great power path, we can expect some action within the next few years.
Author: Noah Smith Posted at 2:17 AM