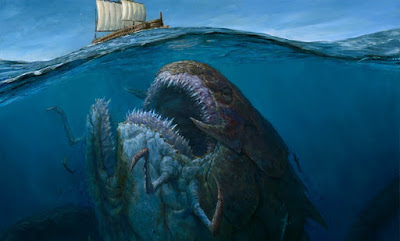 Right now, lots of people are afraid of the wave of racist and sexist harassment incidents that erupted in the wake of Trump's electoral victory. Lots of other people are thinking more long-term, worrying about policy changes (Roe v. Wade, deportations, restrictive immigration laws, health care). Relatively few, as yet, seem to be worried about the further long-term degradation of America's institutions (Daron Acemoglu has a great essay about this).

But there's one danger that dwarfs all of these: the looming specter of great-power war.

Here, via Matthew White, is a visual depiction of deaths from war and genocide during the 20th century. I've annotated it a bit (my explanations are in blue): 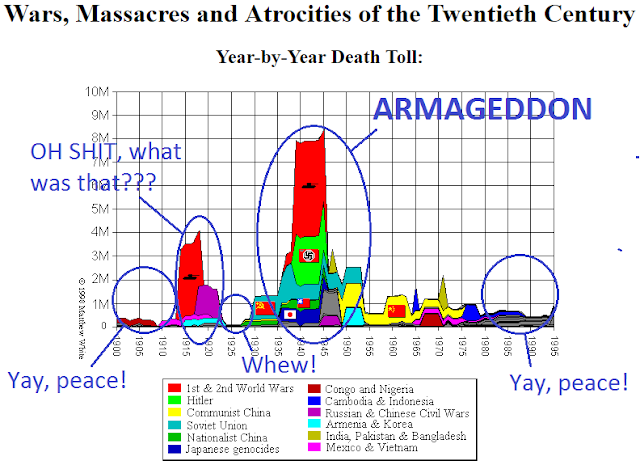 As you can see, the vast majority of the war deaths happened as the result of two great-power wars, World War 1 and (especially) World War 2. Major democides during these periods - Stalin's purges and famines, the Nazi genocides, the Armenian genocide, etc. - were generally an outgrowth of regimes that came to power as a result of these wars. The world wars produced the totalitarian states of Russia, China, and Germany. There are exceptions, of course - Japan's militarist state came about despite its light involvement in WW1. But overall, great-power war tends to give birth to extremist regimes who do terrible things, who start more wars, and who use wars as excuses to do terrible things.

In The Better Angels of Our Nature, Steve Pinker uses extensive evidence to document that violence on Earth has declined over time. Both war and violent crime cause less suffering to the average human being than they did before. But he also shows that the decline has not been monotonic. There have been periodic eruptions in which war and crime soared. As Pinker documents, the vast majority of war deaths are caused by great-power wars, which are relatively rare events. So while it's good to be optimistic about the overall decline in violence, it's wrong to take it for granted. When the Big Boys come out to fight, all bets are off.

Why is this true? One theory of violence that Pinker puts forth is the "leviathan" theory. When there is a higher power making sure that everyone plays nice, violence is low. As people gradually learn to appeal to the authority rather than to settle their disputes between themselves - which requires doing preemptive violence to build up a fierce reputation - the culture of violence ebbs.

But barring the intervention of God or the creation of a world government, there is no authority on Earth more powerful than Great Power countries - currently, the U.S., China, and Russia. Therefore, when these countries fight, there's no one to stop them. And when they focus on fighting each other, they're also unable to police the weaker nations. So "leviathan theory" explains why great-power wars not only cause titanic amounts of destruction, but lead to lasting rises in violence.

The last great-power war ended six decades ago, in 1953. Since then, many people have concluded that nuclear weapons have made great-power war obsolete. The failure of the U.S. and USSR to fight each other during the Cold War lends some credence to this theory. But it's also possible that institutional memory from the World Wars was simply strong enough to make the U.S. and USSR prudent and cautious.

That institutional memory is probably gone now. Everyone who fought in WW2 or the Korean War is too old to govern. Meanwhile, there are some ominous signs. With the election of Trump, all three of the Great Powers now have a strongman at the helm. Xi Jinping's power is unprecedented since the days of Mao, Putin's since the days of Stalin, and Trump's...well, we'll see.

Strongmen are decisive and can get thing done, but they're also unpredictable. A strongman may be for peace one day and war the next. What's more, strongmen tend to have big egos. Trump is friends with Putin today, but what happens if the two alpha males get into a pissing contest?

What's more, the number of flashpoints between the Great Powers is increasing. Russia has rattled its saber at the NATO-protected Baltics, and China has steadily ratcheted up its attempts to claim the whole South China Sea.

A war between two of the Great Powers need not go nuclear, but it would be hard to stop it from doing so. If one strongman leader backed down after a loss in a limited, conventional war, he would have to choose between humiliation and probable loss of power at home, or doubling down and escalating the war. Escalation seems likely. And as for the idea that nuclear weapons are just too horrible and too powerful for anyone to seriously contemplate using - well, they said the same thing about the new artillery weapons that were developed before World War 1. Yet that was no deterrent to war.

So this is the biggest danger of a Trump presidency. But it's not all about Trump, by any means. U.S. voters didn't put Xi or Putin in power, and those threats would be there even if Clinton were in the White House. But I think it's hard to argue that Trump, with his personalistic style and big ego, doesn't increase the risk.

Great-power war is the huge, terrible danger looming over us all. In the medium term - i.e. over the next couple of decades - it's by far the biggest risk to human life, freedom, security, and quality of life.
Author: Noah Smith Posted at 1:26 AM