Scenarios for the future of racial politics in America 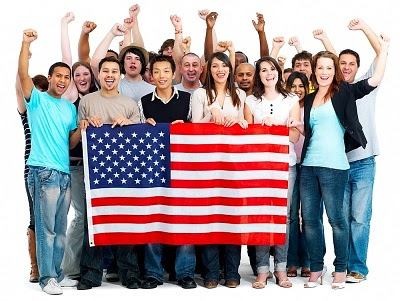 If you don't live in a sensory deprivation tank, you probably noticed that the 2016 presidential election was rather racially charged. Many on the Democratic side charged Trump and his voters with racism, white supremacism, etc. Political scientists found that Trump's most ardent supporters were especially likely to score high on what they call "racial resentment" - their term for the belief that black Americans are getting more than they deserve. Meanwhile, the election results were very polarized by race: 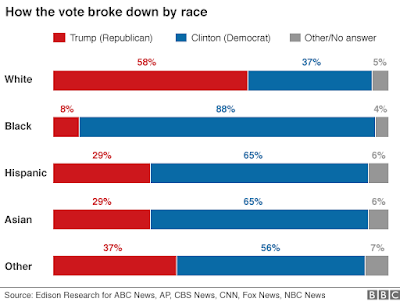 Trump's victory was almost entirely furnished by the white vote, while Clinton overwhelmingly won all minorities. This repeated the pattern of 2012.

Race has always been important in American politics - except for a brief period in the mid 20th century, blacks and Southern whites have always been on opposite sides of the partisan divide. The 1964 Civil Rights Act is widely acknowledged to have spurred the shift of Southern whites from the Democrats to the GOP. Meanwhile, "ethnics" - East and South European immigrants of the early 20th century - voted reliably Democratic until they merged with whites into the modern version of the white racial group.

Many (myself included) also believe that race is important to U.S. political economy. I buy the story that racial divisions are one of the big reasons that America doesn't have as big a welfare state as Europe. One big example of this is the way the GOP has profited from the "line-cutting" narrative - the idea that black Americans (and possibly other groups as well) are getting more than their fair share, "cutting in line" in front of more deserving whites. That narrative has probably damped white support for social safety nets.

So race is really important. But there are three big reasons why racial politics aren't set in stone. First, racial coalitions can change, as when Southern whites and blacks briefly united to support FDR. Second, racial definitions can change, as when "ethnics" joined the white race in the latter half of the 20th century. And third, the salience of race in politics can increase and decrease. So predicting the future of racial politics in the U.S. is no easy task.

Here are the possible scenarios, as I see them. These are extreme scenarios, of course; reality will probably be a lot messier, just as saying "Hispanics vote Democrat" ignores the 29% who voted for Trump. But anyway, here are five futures I can imagine:

This is not a future in which racial divisions vanish or America becomes "colorblind". It simply means that racial divisions would no longer the main dividing line in American public life. People would largely stop defining their political interests by race. The GOP starts appealing to more nonwhites, and the Democrats start appealing to more whites - maybe because the parties shift their ideologies, or maybe because the racial groups themselves change what they want. Intermarriage helps by blurring the boundaries between races. In this scenario, Americans go back to fighting over economics, or perhaps national security or religion, instead of about race.

(There's a very extreme form of this scenario where race does vanish, and "American" becomes a catch-all racial group that absorbs all the groups. But I consider this extreme version to be pretty unlikely.)

This would be a repeat of what happened in the 20th century. Just as Italians, Jews, and Slavs became "white", Asians and Hispanics could come to be regarded as part of the same group as whites. In this scenario, high rates of intermarriage between whites, Asians, and Hispanics, combined with the fact that many Hispanics already identify as white, blur the distinction between the three groups. The new group might be called "white", or it might be called something else.

In this scenario, blacks would be the odd group out, as they ended up being in the 20th century. Since black people are expected to stay at only around 13% of the American population, even with continued African immigration, this means that there could be no winning coalition that did not include a very large piece of the new racial majority. Race would lose some (but not all) salience, as it did in the late 20th century, when economic issues joined racial issues as the dividing lines between Republican and Democrat.


3. Scenario 3: All Against Whites

In this scenario, tensions between whites and the other racial groups continue to rise. The GOP gains an increasing share of the white vote, while Asians and Hispanics become even more overwhelmingly Democratic. Asians, Hispanics, and blacks might or might not start to consider themselves a single race, but they would be united politically by their opposition to whites. Since other races are approaching demographic parity with whites, this scenario might see an increasingly racialized but still even split - whites could desert the Dems at about the same rate that they lost demographic heft, leaving the two parties still roughly equal for decades.

This is similar to Scenario 3, except that the white racial group would split in two. The dividing line might be education, or perhaps just politics itself. Those who left the white race would simply stop self-identifying as white. They might go back to identifying with their national ancestries ("German-American", "Irish-American", etc.), they might combine with Asians, Hispanics, and/or blacks into a new racial group, or they might create some new category for themselves. Meanwhile, the rump "white" race would simply be the GOP-voting part of the current white race, and would continue to identify as white. The dividing line would still mainly be race, but now the Democrats would have a structural advantage as the percentages of Asians and Hispanics increased.

This is the weirdest scenario. It's a bit similar to Scenario 4, except that some Asians and Hispanics also leave their races and join the GOP-voting whites both electorally and racially. The nation would still have two big racial blocs, and the electoral dividing line would still be race - so this is different than Scenario 1 - but the American races of the future would in no way resemble the ones we see today. Politics and race would fuse into a single concept. Democrats and Republicans would become like Hutus and Tutsis, Bosniaks and Serbs - not necessarily able to tell each other apart visually, yet deeply believing themselves to be two totally different peoples. As you can see from the aforementioned analogies, I consider this to be a pretty pessimistic scenario.


These five scenarios don't exhaust the possibilities (everyone could start to identify as black!), but they're the only ones that seem to me to have any chance of happening. Actually, I'm not sure about Scenario 1 - it's kind of wishful thinking on my part.

Scenario 2 has the weight of history on its side - it's happened twice before. The white race in America has proven very capable of expanding to take in new entrants, as it did with Germans and Swedes in the 19th century and East and South Europeans in the 20th.

Scenario 3 is most similar to the recent electoral outcomes, so it's sort of a straight-line trend projection of increasing racial polarization. I also consider this to be a pretty pessimistic scenario.

Scenario 4 is a projection of a somewhat less prominent trend - the increasing polarization of the white electorate by education. College has emerged as one of the key institutions of American society, if not the key institution, and there's a chance that skill-biased technological change will make that situation irreversible. A combination of progressive education and the venom of GOP-voting whites could cause liberal whites to simply decide that the white race isn't something they want to be a part of anymore.

Scenario 5 is the projection of yet another trend - the Big Sort. Like-minded Americans are already moving near each other and marrying each other. Social media, and the splintering of mass media in general, could accelerate the trend. Partisanship is virulent in America at the best of times, and it does seem conceivable that it might eventually be even more powerful than race.

So what do you think? Did I miss any plausible scenarios? Which scenario do you think will come to pass? Which will be best for the Democrats, and which will be best for the GOP? How can the parties nudge American society toward their desired scenario? And what would be the consequences of each scenario, for policy, for people's lives, and for the integrity of the nation-state? How should we intellectuals try to steer the populace, if indeed we have any ability to do so? These are the big questions, and they're all beyond my ability to answer just yet.
Author: Noah Smith Posted at 6:26 AM