NorCal progressives, in contrast, tend to think that market-rate housing is bad - either they think it lures more high-earners into a city and pushes up rents (induced demand), or they object to private housing developers making profits, or market-rate housing just sounds like cities catering to the needs of richer residents instead of poorer ones. Instead, the progressives tend to support what they call "affordable housing" - either public housing, government-subsidized housing, or privately-subsidized housing mandated by inclusionary zoning.

When defending market-rate housing, many YIMBYs appeal to the idea of supply and demand. If you supply more market-rate housing, the market rate itself will fall, making many previously unaffordable houses into affordable ones. This might be true - in fact, evidence suggests it is true, at least to some extent - but I think it's a weak defense, for several reasons.

First of all, supply and demand is a simplistic model. It assumes a single homogenous good, when in fact everyone knows that housing comes in a bunch of different types. It doesn't take location into account, when everyone knows location is crucially important in urban real estate. And there are some situations, especially labor markets, where supply and demand just seems like a bad model for how the economy really works.

Second, the effect of new supply on rents might not be enough to help working-class families. If you build a ton of new housing and rents only go down by 3% - or go up by 3% less than they would have otherwise - it's not going to do a lot to help the people who progressives really want to help. Because of this possibility, "supply and demand" can sometimes sound a bit like "let them eat cake".


Background: Invasion of the Tech Yuppies

The structure of the U.S. economy has changed a lot in recent decades. Knowledge-based industries like tech, medicine, and finance are much more important - for simplicity's sake I'll refer to all of these as "tech". Tech businesses have ever more of an incentive to cluster together in cities, which means that tech workers - who tend to earn high salaries - have been moving into cities like San Francisco. 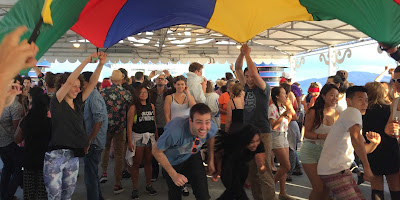 Some will move into shiny new glass-and-steel apartment complexes downtown: 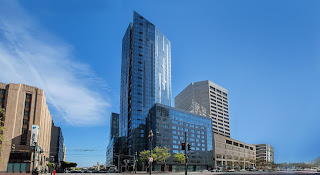 Looks kind of like a fishtank, doesn't it? A beautiful fishtank for yuppies. 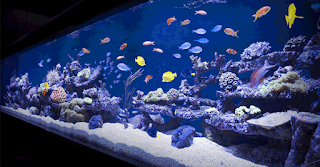 But these beautiful giant yuppie fishtanks have limited space. So some of the incoming techies will go looking for apartments in other parts of town - neighborhoods occupied by long-time residents. 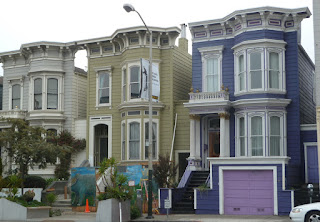 Many of the long-time residents currently renting these units are working-class. Many come from disadvantaged minorities. Some are artists or other creative types.

Now, often they can't do this, because of rent control. But there are things they can do to get around rent control. They can convert units to condos. They can evict tenants under the Ellis Act. Or they can just wait for residents to move out, then raise rents.

Additionally, not all apartments are subject to rent control, so often this isn't even necessary - landlords can often just raise the rent, which usually results in the replacement of working-class tenants with yuppie newcomers.

The result: Displacement, gentrification, and an increasing rent burden on everyone not protected by rent control.

How to Prevent Displacement From the Tech Invasion: The YIMBY Solution

The YIMBY solution to the problem described above is simple: Build more of the pretty glass fishtanks to catch the incoming yuppies as they arrive. 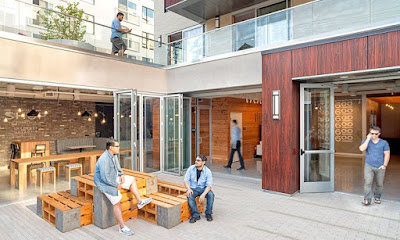 Most of the yuppies would probably rather live in the fishtanks. The fishtanks tend to be located downtown, near to where the yuppies work (SoMa, Embarcadero, etc.), rather than in the older residential neighborhoods. Additionally, the fishtanks are pretty and modern and new, with gyms and common space and other stuff yuppies like. Probably more attractive for the average yuppie than an aging Victorian far out in the Mission or Haight with no built-in community or on-site services.

Even more importantly, long-time working-class residents and struggling artists and disadvantaged minority families are highly unlikely to go live in a yuppie fishtank. That means that every unit of yuppie fishtank housing - i.e., new market-rate housing - that you build will either A) be occupied by a yuppie, or B) sit empty on the market. Landlords want to fill all of their units, so if there are too many fishtanks and (B) happens, they'll drop the rent until more yuppies move in.

Eventually, every yuppie fishtank unit that you build will be occupied by a yuppie.

If the new fishtank units instead draw yuppies in from other cities - for example, in the Peninsula to the south - that's not ideal, but also not so bad. It means more yuppies in the city, but they'll be living in fishtanks instead of in long-time residential working-class neighborhoods. In other words, it's a wash - it neither increases nor decreases the total number of gentrifiers. (In any case, I think this is unlikely to happen much. The number of tech yuppies moving to SF is constrained by the number of tech offices in SF - almost no one wants to commute down the peninsula and back every day if they can help it. and yuppies are usually rich enough to be able to live near their jobs if they want.)

So the YIMBY solution to the yuppie invasion isn't - or shouldn't be - just to build market-rate housing anywhere and everywhere. It's more like the following:

A) Build market-rate housing that appeals specifically to yuppies, clustered in specific neighborhoods away from long-time working-class residential areas.

In other words, YIMBYism is about yuppie diversion. It uses market-rate housing to catch and divert yuppies before they can ever invade normal folks' neighborhoods.

Suppose you're a long-time working-class resident who gets displaced by rising rents. Now the government offers you affordable housing somewhere else in the city. Well, at least you still have a place to live, and at least you're still in the city you've always lived in, right? But you have to move out of your home, which is expensive and emotionally draining. And you probably have to move to a new neighborhood, where your local ties will be weaker. In other words, it would have been better if you never had to move at all.

So if cities can catch and divert the incoming yuppies (with new market-rate housing) instead of accommodating displaced working-class people, it's much better.

Why Affordable Housing Is Good Anyway 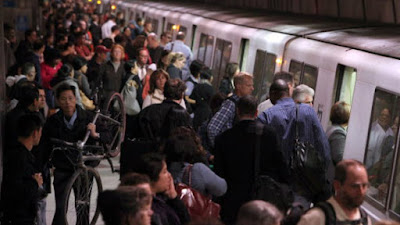 Building new market-rate housing probably doesn't draw many new yuppies into a city from outside, since if their jobs are outside the city they'd still have to commute; most people would rather not commute, and yuppies can typically afford to live near where they work. But many working-class people are forced to commute from outside the city. Affordable housing changes that equation. It allows more working-class commuters to live closer to their jobs.

The YIMBY solution of catching and diverting incoming yuppies with market-rate housing (yuppie fishtanks) seems like a good one because it creates a city where everyone, yuppies and working-class folks alike, can live, while limiting the disruption to long-standing neighborhoods and communities.

YIMBYs generally support repealing the Ellis Act. Rent control is more ambiguous, since it tends to hurt a lot of working-class people while helping others.

But initiatives like these, on their own, won't be enough to create a good city for working-class residents.

When combined with prohibition of market-rate housing development, these initiatives seek to drive yuppies out of a city entirely. By creating an iron-clad, invincible wall around working-class neighborhoods and apartments, and confining them to ever-shrinking, ever-more-highly-priced islands of market-rate housing, this strategy seeks to force yuppies (and possibly their employers as well) to leave for greener pastures.

But this is not a good idea. Driving yuppies and tech businesses out of the city means lower tax revenues. Those tax revenues are essential for paying for city services for the poor and working-class. Public housing, housing subsidies, homeless shelters, drug addiction clinics, social workers, public transit - these things all rely on tax revenues. And tech businesses and yuppies provide those revenues.

NIMBYism, even progressive NIMBYism, doesn't lead to a city that works for everyone. It sacrifices prosperity, and (even more importantly) the social services that prosperity makes possible, in order to avoid the cultural change that comes from having yuppies walking the streets.

That doesn't seem like a trade worth making. A successful city is one that doesn't simply preserve itself in amber, but embraces positive change that will improve the lives of its working class and poor residents.

Wait - Does This Explanation Really Throw Away Supply and Demand?

Astute readers will notice that supply and demand isn't completely absent from this explanation of YIMBYism. But this explanation contains several major departures from the textbook supply-and-demand theory that you might learn in an Econ 101 class.

First of all, in a typical supply-and-demand model, there's only one kind of housing. In this explanation, there are three kinds of housing - "yuppie fishtanks" (new market-rate housing), long-time resident housing, and affordable housing. Market segmentation is real. This is something activists actually understand better than people who think only in terms of supply and demand.

Second of all, a typical supply-and-demand model of housing ignores location. In this explanation, location is crucial - the YIMBY solution is to build new market-rate housing in neighborhoods like SoMa, so that incoming yuppies go there instead of to neighborhoods like the Mission.

(Now, there are far more complicated economic models out there that capture all of these ideas and more. These models are actually more nuanced and realistic than my explanation here. But it's very hard for most people to think in terms of these models, and these models can also give different predictions depending on their assumptions.)

So when defending the YIMBY position, it's important to go beyond simply yelling "supply and demand". I hope this post gives YIMBYs a language to talk about market-rate housing without having to assume that all housing is the same, or that location doesn't matter.

Market-rate housing isn't the only solution to the problems facing cities like San Francisco. But it is an important, even crucial part of the solution.

Want some evidence that the "yuppie fishtank" strategy really works? Here you go:

This is exactly how it's supposed to work.
Author: Noah Smith Posted at 2:50 PM