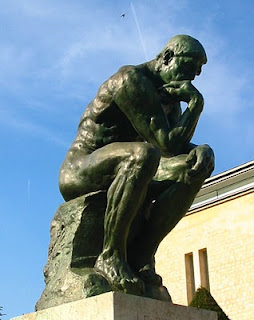 It is very rare that I entertain feelings of pride regarding my culture and civilization - or even, for that matter, that I even recognize important differences between cultures at all. I'm just not that kind of guy. But, as a 500-year period of Western civilization's dominance draws to a close, I find myself pausing and reflecting on what, if anything other than luck, gave that civilization an edge for those 500 years. I find myself coming back to the following three quotations:


1. "There are more things in heaven and earth, Horatio, than are dreamt of in your philosophy." - Hamlet, William Shakespeare (late 16th century British playwright)


2. "[W]e [scientists] take it for granted that it is perfectly consistent to be unsure - that it is possible to live and not know. But I don't know whether everyone realizes that this is true. Our freedom to doubt was born of a struggle against authority in the early days of science. It was a very deep and strong struggle. Permit us to question -- to doubt, that's all -- and not to be sure.

Through all ages, men have tried to fathom the meaning of life. They have realized that if some direction or meaning could be given to our actions, great human forces would be unleashed. So, very many answers must have been given to to the question of the meaning of it all. But they have been of all different sorts, and the proponents of one answer have looked with horror at the actions of the believers in another. Horror, because from a disagreeing point of view all the great potentialities of the race were being channeled into a false and confining blind alley. ... The dream is to find the open channel.

What, then, is the meaning of it all? What can we say to dispel the mystery of existence ?

If we take everything into account, not only what the ancients knew, but all of what we know today that they didn't know, then I think we must frankly admit that we do not know.

But in admitting this, we have probably found the open channel.

This is not a new idea; this is the idea of the age of reason. This is the philosophy that guided the men who made the democracy that we live under. The idea that no one really knew how to run a government led to the idea that we really should arrange a system by which new ideas could be developed, tried out, tossed out, more new ideas brought in: a trial and error system. This method was a result of the fact that science was already showing itself to be a successful venture at the end of the 18th century. Even then it was clear to socially minded people that the openness of the possibilities was an opportunity, and that doubt and discussion were essential to progress into the unknown. If we want to solve a problem that we have never solved before, we must leave the door to the unknown ajar. ...

It is our responsibility to leave the men of the future with a free hand. In the impetuous youth of humanity, we can make grave errors that can stunt our growth for a long time. This we will do if we, so young and ignorant, say we have the answers now, if we suppress all discussion, all criticism, saying, 'This is it, boys! Man is saved!' Thus we can doom man for a long time to the chains of authority, confined to the limits of our present imagination. It has been done so many times before.

It is our responsibility as scientist, knowing the great progress and great value of a satisfactory philosophy of ignorance, the great progress that is the the fruit of freedom of thought, to proclaim the value of this freedom, to teach how doubt is not to be feared but welcomed and discussed, and to demand this freedom as our duty to all coming generations."

3. "All that is, was and will be
universe much too big to see

time and space never ending
disturbing thoughts, questions pending
limitations of human understanding
too quick to criticize
obligation to survive
we hunger to be alive

in the dark, see past our eyes
pursuit of truth no matter where it lies

gazing up to the breeze of the heavens
on a quest, meaning, reason
came to be, how it begun
all alone in the family of the sun
curiosity teasing everyone
on our home, third stone from the sun"

It seems to me that over the very, very long term, societies that heed this principle - that recognize and therefore struggle against the limits of human certainty - will reap more benefits than those that ignore it. A piece of advice, if you will, for those who come after us.

Email ThisBlogThis!Share to TwitterShare to FacebookShare to Pinterest
Labels: Civilization